How do Eels Reproduce and Where on Earth do They Come From? 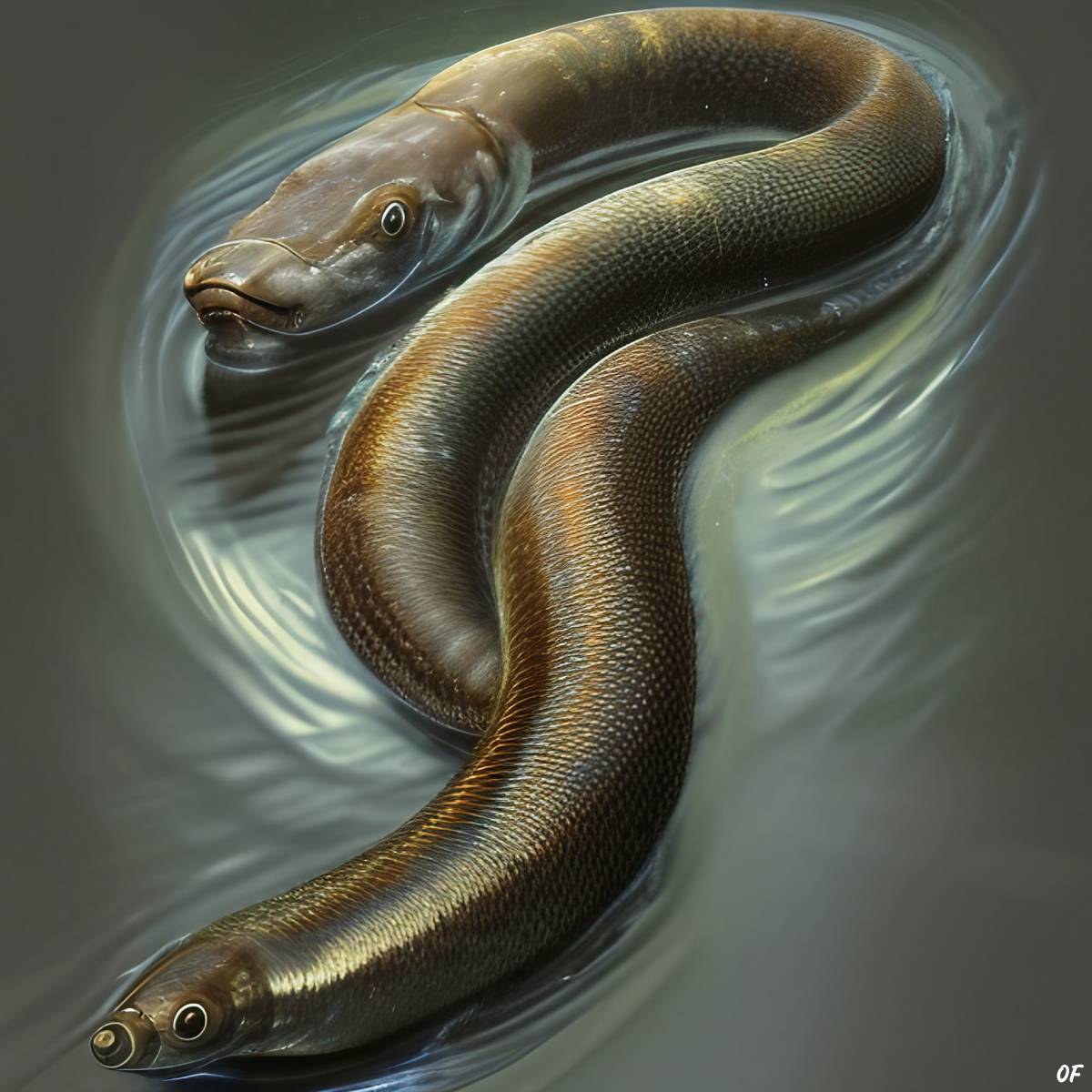 When we count the wonders of the world, you’d never imagine the eel’s reproductive system would warrant consideration as an unofficial ninth wonder. This mystery became a worldwide phenomenon long before colethesciencedude on TikTok made it a hot social media topic.

Before we continue, you should know this fish is different from electric eels. Those aren’t even real eels. They’re South American knife fishes! And while electric eel reproduction is nothing to write home about, the life cycle of the freshwater eel has proved to be an enduring enigma.

What’s strange about eels is that they seem to lack reproductive organs. Only the invention of microscopes and other advanced equipment helped scientists solve this riddle of the past century. They could study the freshwater eel that evaded them for so long, and discover that these creatures do, indeed, have reproductive organs—the only issue was that you couldn’t see them until the adult eel reached the Sargasso Sea. That’s unlike any other sea creature in the world.

Read more: Can the Pistol Shrimp Hurt a Human?

Where do eels come from?

This question has troubled the minds of great scientists from time immemorial. Every philosopher worth his salt took a crack at unraveling the mystery of the eels’ origin.

Aristotle suggested eels came from earthworms who got out of the mud. Sigmund Freud dedicated ten hours daily to studying this snake-like fish. Other scientists claimed they came from spontaneous regeneration.

After many expeditions aimed at catching freshwater eels, the first breakthrough came in 1886. French zoologist Yves Delage saw his leptocephalus change into an eel, then realized all sub-species were, in fact, steps of an entire life-cycle! In 1904, after spending 20 years on freshwater research, Johannes Schmidt discovered their migration pattern.

Do eels have reproductive organs?

After Schmidt’s discovery, many questions remained: “Do eels have reproductive organs? How do they mate? Where are eels born?”

Freud wrote, “…all I can think about are the big questions, the ones that go hand in hand with testicles and ovaries—the universal, pivotal questions.”

We know they aren’t asexual animals. However, no one ever saw an eel with genitals not even in its transparent state! So, where did the offspring originate?

Zoologist Lucy Cooke has a theory that eels form from external fertilization. She suggests clouds of sperm fertilize free-floating eggs.

Curiosity led to another fantastic discovery. It turned out that the spawnings traveled by ocean currents from the Sargasso Sea, the world capital of eel reproduction.

Migration to the Sargasso Sea

Eels start their lives from the Sargasso Sea in the middle of the Atlantic Ocean. They need saltwater for development. The ocean’s current forms a sea within a sea like a Russian doll.

Although they spend their lives in fresh water, eels always return to the sea to breed. That’s why eel migration remained a mystery for a long time, and there’s still no known account of their actual spawning grounds. There’s the historical myth about expeditions in the Bermuda Triangle. It doesn’t get more elusive than this.

Before Delage’s discovery, scientists thought there were many eel species. It turned out they were just one species going through multiple life stages.

The life cycle of European eels

Adding to the uniqueness of the Anguilla species is their sex determination. Environment plays a significant role in knowing their sex. You can’t tell until they reach the Sargasso Sea.

There are two sexes of the eel. Young males live for an average of 12 years, while females live longer at 18 years. They go through five live stages: egg, larva, glass eel, elver, and silver eel.

Eels aren’t strong swimmers at the beginning of their lives, so the ocean current carries them from their homes. The fish goes through body changes at each stage. They grow more prominent features with darker skin.

The first metamorphosis baby eels change to the larval stage. Some people call the larvae “fingerlings” and Leptocephalus. They have significantly bigger bodies than other fish larvae.

Baby eels form when the larvae absorb yolks in the eyes and teeth. Then they feed on marine snow and particulate organic matter for more growth. Eel larvae travel for about 17 months towards estuaries.

At 18 months, this fish becomes an underdeveloped Glass eel. The juveniles then enter river bays. Young eels these days face difficulties swimming into the open ocean because of the flood defenses in the coastline.

The pre-adult stage at two-three years is when elvers form. They have a dark yellow pigment and stretch between 3.14 and 7.87 inches (8 to 20 cm). That’s a little shorter than a mature eel.

They feed on crustaceans, worms, and insects. Yellow eels live upstream (in streams and rivers) for 10 to 14 years, until they mature and migrate back to the Sargasso Sea.

Adult eels (silver eels) develop a silver skin tone as a sign of sexual maturity. At this stage, they leave the freshwater and move to the tropical sea.

Eel sex is fairly straightforward; the female adult eels release their eggs for male fertilization, after which both males and females die. The spawns hatch into larvae and migrate back into brackish waters.

Eel farming is a lucrative part of the multi-billion-dollar aquaculture industry. Statistics show that 60% of people eat eel meat. This fish’s round, elongated body is a nutritious source of protein.

This venture is typical in Europe, Morocco, Australia, Taiwan, China, and Scandinavian countries. Japan is the largest single producer.

Eels thrive at 23°C-28°C, which makes them suitable for warm weather. They feed on meat, so you have to periodically separate all the eels by size to avoid cannibalism—mature fish would eat the smaller ones.

Eel farming proves to be an endangerment to the species. Yellow eels and glass eels are at risk of extinction. The American and European eels are on various endangered species lists. This has led to a ban on the eel trade from Northern Africa to Europe.

Do eels reproduce in captivity?

Until recently, it was very difficult to breed captive eels. Breeders traditionally buy elvers to restock eel populations in depleting ponds. Others stock wild glass eels instead. This practice brings a disease risk, however, and experts advise owners to quarantine new stock to prevent infection.

Although the majority agree there’s no known reproductive organ of the eels, some disagree.

According to Sebastian Politis, a researcher at the National Institute of Aquatic Resources: “We definitely have seen eels that have reproductive organs—we’re reproducing eels in captivity.” Newsweek did a fact-check in August and confirmed this position.

Recent discoveries back up the claim of existing reproductive organs in adult eels when they reach the Sargasso Sea. Why that happens remains a scientific mystery.

There are many variations of the Anguilla species. Each one has a different breeding ground. The most popular is the European eel that grows in brackish water and fresh water.

On the surface, all American and European eels look alike, but you’ll note variations when you look closer. Their internal organs are different. Others are the American eel (Anguilla rostrata), the Japanese eel (Anguilla japonica), the South African eel, and New Zealand longfins.

This species is in the middle of the conservation scale. It spends its life span in fresh water and the Baltic sea. Studies show American eels migrating across the continental shelf to the Sargasso Sea in the early spring for spawning.

Scientists tracked the movement of mature eels with satellite implants. They noticed that American eels had two migration paths. The first was along the continental shelf, while the other was in deep waters towards the spawning ground.

This species is as prevalent as its European counterpart.

Read more: How Lobsters Communicate: You Think You’ve Got Problems?

Although theories on the breeding area for eels are based largely on inference, they aren’t far-fetched. One thing is sure: eels migrate from the Sargasso Sea into fresh or brackish water and return to it at the end of their lives.

It’s unlikely that we’d ever catch adult eels in estuaries or upstream, so we may never know for sure. Maybe scientists will lead more daring expeditions into the Sargasso Sea in the near future. Until then, we’ll have to make do with the information we have.

Camazotz: Bat to the Bone, Arbiter of Justice or Pure Myth?