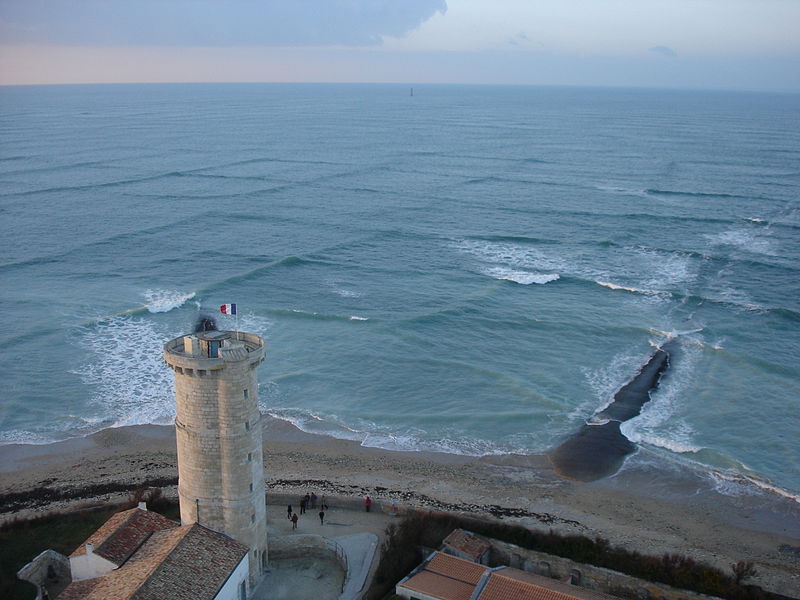 A cross sea or square waves in the ocean seen from Phares des Baleines (Lighthouse of the Whales) on Île de Ré. (Photo: Wikimedia/Michel Griffon)

Square waves in the ocean are a phenomenon that you may observe on the Isle de Ré in France and in some parts of New Zealand, square waves are beautiful, amazing, and potentially deadly. So, what causes them, and just how dangerous are they? Let’s explore this anomaly so that you can get a better idea of why it’s a good idea to stay away from the water if you spot dangerous cross waves.

A cross sea is exactly as it sounds. Violent riptides are ready to pluck even the strongest swimmers from surface-safety to the depths below and not only this, but ships have even been tossed about when encountering these wave systems. This is due to the nature of what you are seeing. While it manifests as an orderly grid pattern that may span the water for as far as you can see or simply form near the shallow waters of the beach, what you are observing is not the product of something below, but rather two weather systems colliding.

While the rip tides CAN pose a danger to swimmers, most of the information which you see in this regard is a bit exaggerated in order to get your attention. Most swimmers who see square waves in the ocean are going to be in relatively shallow water and have a good chance of getting out of it once they’ve noticed. As they form near the coast, in areas where tourists gather, swimmers will have been warned in advance and these ripples can even be quite safely observed in depths of water only inches deep. Plus they don’t tend to last very long, sometimes dissipating in minutes.

When ships observe a cross sea, however, it is a different story. In fact scientists around the globe are involved in square wave studies looking at dangerous cross seas and the occurrence of rogue waves.

However brief, when two weather systems are colliding like this you can get waves as high as 10 feet and the design of ships, fine for a single weather system, are in very real danger of rolling when this occurs. If you happen to be in a small boat and not very far out then it is likely that you are going to be okay. So, if you see square waves in the ocean, they are as dangerous as you’ve heard, but mostly in the deeps.

Just leave the water immediately when you witness this phenomenon, you’ll avoid potentially deadly riptides; something even experienced swimmers should avoid.