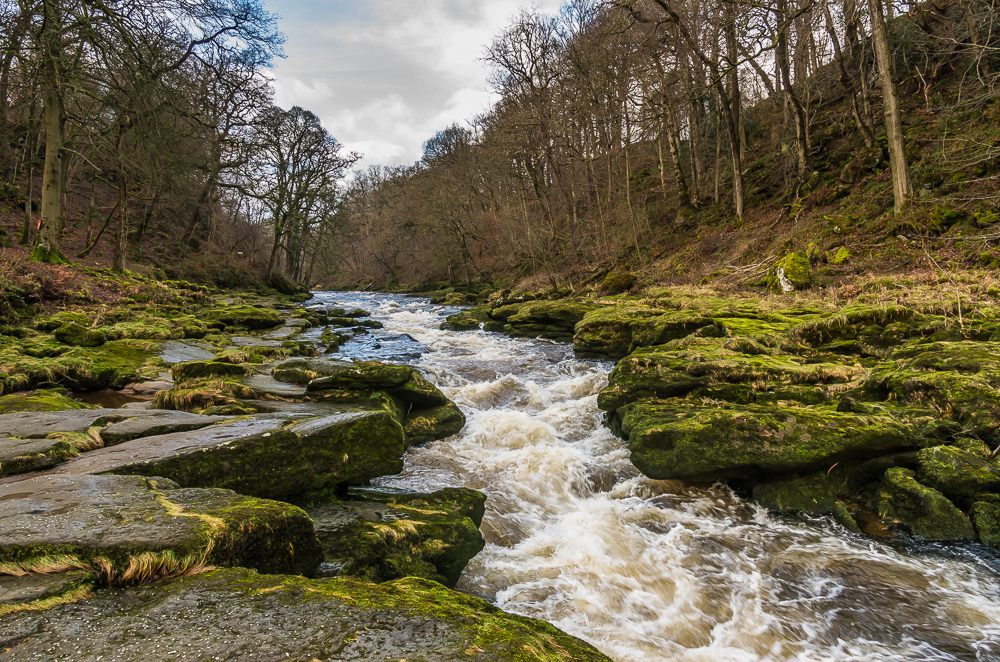 The Bolton Strid. A section of the River Wharfe where the river has gouged a narrow but deep channel with mossy slabs either side. (Photo: geograph.org.uk/Ian Capper)

The River Wharfe serves predominantly as the boundary between West and North Yorkshire counties in the North of England. But one picturesque stretch of its sixty-five-mile (104.6 km) length, named the Bolton Strid, is notorious for being one of the most dangerous stretches of water in the world.

Why is the Bolton Strid so dangerous?

The Bolton Strid itself is a series of small waterfalls and rapids near Bolton Abbey, a small village and ancient monastery in Wharfedale. This section of the river is associated with the hidden dangers created by the sudden narrowing of the River Wharfe. Just 100 yards upstream, the river is as wide as thirty yards, with pleasant, shallow waters. But as the water moves into narrower confines, its flow is flipped. Thanks to the drastic change in width, this six-foot-wide stretch of river is deceptively deep, as the rushing river cascades into a narrow gap and is forced to flow vertically.

The river’s water flows much faster in the Strid and can drag any unwitting victim under the surface to their death.

Part of the Bolton Strid’s danger is its charm. Mossy rocks and enticing stepping stones litter the river valley, but it’s developed a dangerous reputation over the centuries. Several warning signs placed along the banks of the river exclaim, “The Strid is Dangerous and Has Claimed Lives in the Past. Please Stand Well Back and Beware Slippery Rocks”.

The manner of the victim’s death can vary, as the river’s hidden dangers go beyond just aggressive currents. The water has jagged rocks, carved undercut banks, and small caves that can trap people underwater.

If local legend is to be believed, Bolton Abbey itself owes its creation to the Bolton Strid.

In 1154, a young man named William de Romilly was on a solo hunt in the area. He attempted to leap the six feet gap across the Strid but failed to find his footing. He tumbled into the river and met his watery doom. His body was never found.

His mother, Lady Alice de Romilly, was so heartbroken by the loss of her young boy that she donated the surrounding land to Monks to build Bolton Abbey so that they could pray for his soul.

As to whether that is the real reason for the donation, it is unclear, but the story ties the village to the Bolton Strid and no doubt provides endless cautionary tales for its younger inhabitants.

Once Poet Laureate of the United Kingdom, William Wordsworth immortalized the tale in a poem, referencing its name, Strid, to “stride,” suggesting people believed they could stride over it.

This striding-place is called THE STRID,

A name which it took of yore:

A thousand years hath it borne that name,

And shall a thousand more.

And hither is young Romilly come,

And what may now forbid

That he, perhaps for the hundredth time,

Shall bound across THE STRID?

He sprang in glee,- or what cared he’

That the river was strong, and the rocks were steep?

But the greyhound in the leash hung back,

And checked him in his leap.

The boy is in the arms of Wharf,

And strangled by a merciless force;

Till he rose a lifeless corse.

How many people have died in the River Wharfe

The Bolton Strid has built its dangerous reputation for claiming lives, but a lack of records means that naming it the most dangerous stretch of river in the world is unofficial.

Locals will say it’s killed everyone who dared enter its waters, and although there are plenty of instances of successful rescues, several confirmed tragedies have occurred in recent years.

However, some people have entered the Strid intentionally, sometimes for the sake of science; others, adventure seekers, and lived to tell the tale.

Diving attempts in the 1970s were an attempt to gauge the exact depth of the river in that area. Since then, scuba diving has been banned in the river.

One of the more recent tragedies in the Bolton Strid involved the sad deaths of a newly married couple in 1998.

Barry and Lyn Collett were honeymooning in North Yorkshire and took a walk along one of the hiking trails near the River Wharfe. Sudden rainfall caused a catastrophic rise in the water. Some estimates claim the water in the Bolton Strid rose five feet in just a minute, sweeping Barry and Lyn away.

In 2007, Evie Hastings, a seven-year-old girl, was rescued after another lightning-fast rise in water levels.

Luckily, her family jumped to the rescue, and although they met problems themselves, she was saved. Passerby Matthew Firth removed his trousers and jacket to help pull Evie from the river.

Since the incident, Evie’s father has been a strong voice in the community, pushing for safety regulations surrounding the Bolton Strid.

The Bolton Strid continues to be a dangerous stretch of the River Wharfe. And although its legendary 100 percent casualty rate is not entirely accurate, it certainly helps visitors to the river respect its dramatic power.