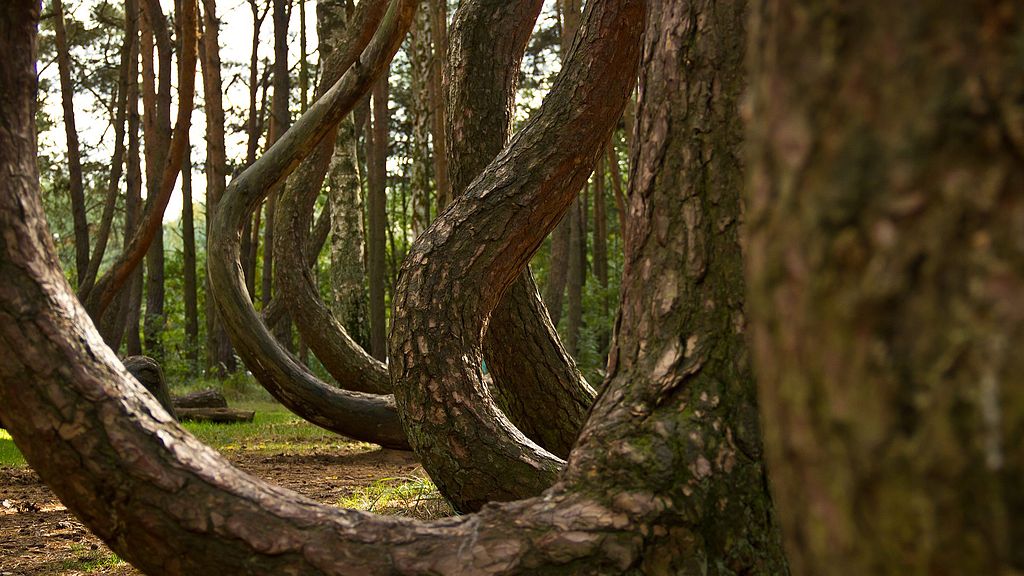 Trees grow up. Well, not exactly.

Just outside of the small town of Gryfino, Western Poland, a small forest of oddly shaped trees has been growing since the 1930s. Aptly named the Crooked Forest of Krzywy Las, these pine trees grow in an odd but identical shape. Almost every one of the trees is bent northward and curl around before continuing to grow straight up.

Read more: The improbable tale of the Tunnel of Love in Ukraine

The Crooked Forest makes for a strange sight that resembles something out of a Brothers Grimm story, and the mystery of the trees has puzzled locals for years. Even scientists haven’t been able to explain the pines and their curious shape.

There are, however, many theories. Let’s have a look at some of the most popular ideas surrounding the Crooked Forest.

The first theory is that a sequence of gravitational pulls, isolated to this one small forest area, curled the young trees as they began to grow. There is no scientific evidence to support this theory in the slightest.

It is a terrible theory, thanks to the simple fact that gravity doesn’t pull objects to the side. It only pulls them down. And even if it were possible, other plants and objects in the same area don’t have the same curve.

Some locals have suggested that the trees were covered by snow in the early stages of their growth. The weight of the massive amounts of heavy snow over an extended period caused them to bend. When a late Spring eventually came, the snow melted, and the trees could grow straight again, leaving behind the curved bottoms in the trunk.

The biggest problem with this theory comes mainly from the size of the area. The bent trees cover two hectares and are in the middle of a more extensive forest full of straight pine trees. An entire forest was spared from the same curve. It’s not likely a heavy snowstorm could be so geographically selective.

This theory may sound like it could make sense, but not when compared with the rest of the world. Mutations are common in trees, creating a creepy gnarled effect, where the trunk and limbs protrude in unsightly directions.

But these are not crude-looking trees. They are all perfectly shaped in the same manner. Genetic mutation couldn’t create such similarities.

Some people believe that tanks plowed their way through the forest at the start of WWII, during the Nazi invasion of Poland in 1939. As the tanks trundled over the sapling trees, they were bent and contorted. However, they were still young enough not to snap and continued growing with the prominent bends now in place.

This theory meets its end in much the same way as the snowstorm hypothesis. There is an entire forest in the region. If German tanks rattled through the region, the destruction would not have been limited to such a small and precise area.

The most likely reason

The most convincing explanation for the Crooked Forest comes from local farmers. The theory does cross over with World War II, but not because of tanks.

The most accepted theory is that the shapes are artificial. Local farmers planted the trees and grew them purposely with a bend in them. This may have been for construction purposes, like making furniture or creating shaped timber for building boats.

Around the same time that the trees would have been planted and shaped, Poland was invaded. It’s not hard to believe the farmers probably had more pressing concerns than pine trees. The trees left untended and uncut flourished to create the now-famous crooked forest.

Gryfino was devastated during the war. Previous inhabitants didn’t return until the 1970s, meaning even those who live there now couldn’t have known the real reason for the mystery of the Crooked Forest.