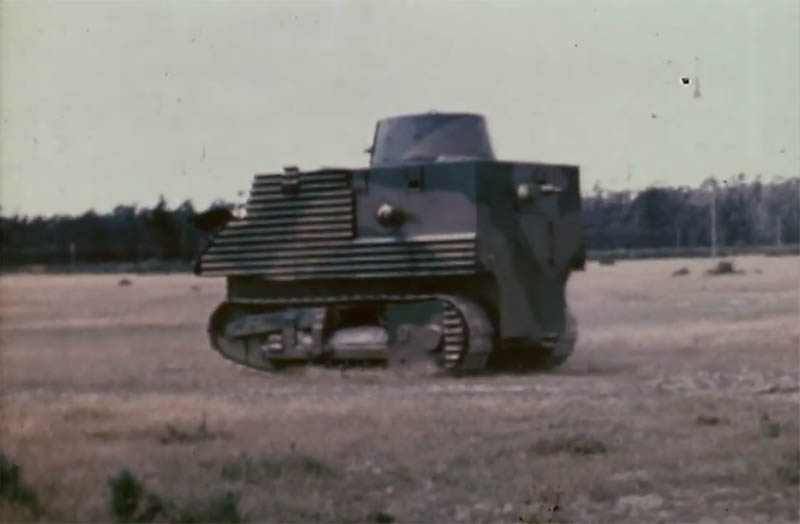 The Bob Semple Tank used corrugated iron instead of armour plating. Fortified by 6 bren guns it housed a crew of 8. Only 3 were ever built for a total cost of £10,225. (Photo: YouTube/New Zealand Archives)

War produces innovations and while some of them are sheer genius, the Bob Semple tank is not one of those cases.

The Bob Semple tank was a product of World War II which came about by necessity after France fell in 1940.  The British were losing tanks and they couldn’t very well afford to export them at a time when they were so dearly needed, thus a decision was made to postpone a much-anticipated shipment of their armored juggernauts to New Zealand. The New Zealanders (or ‘Kiwis’, as they like to call themselves in relation to a local, flightless bird, not the fruit) became understandably nervous over this delay.  Japan was ruthlessly expanding their territory at this time and an invasion of New Zealand was considered a very real possibility.

A hero was called for and one stepped forward. Let’s talk about Bob Semple.

A man of many roles

Bob was an interesting character. He had lived through the First World War and even campaigned actively against becoming involved in it. During his life he had ‘worn many shoes’, as it were, playing such roles as a miner, a boxer, an industrialist, and eventually a Union leader as well. As president of the Runanga miner’s union Bob got into a bit of a bind, as his advice to miners that they stand fast against conscription into the war earned him an arrest and worse, a trip to prison without the luxury of one of those fancy ‘jury trials’ thanks to the recently passed ‘War Regulations Act’.

Released in 1917, Bob tried on ‘political shoes’ again for a space but didn’t do so well until 1935, when he would re-enter politics as a much-changed man. THIS Bob was not only very much for conscription (which he was able to get implemented) but was essentially now New Zealand’s own Minister of War.

Say what you will about Bob Semple but he certainly sampled every food at the buffet.

When he was given the task, Bob was not a man to be discouraged by the lack of working blueprints for building a proper tank. He could certainly have acquired them, but he felt that this was too time-consuming.

Instead, armed with an American postcard which described the process of converting a tractor into a makeshift tank, Bob quickly assembled a team with a can-do attitude. Bob and his team began making modifications on D8 Caterpillar tractors and the Bob Semple Tank was born.

“Luckily we had big tractors here and they were a godsend”, Bob would remark later, although his tractor-tank design would not get the reception that we was expecting.

Making tanks from scratch… what you imagine vs. what you get

Now, in Bob’s defense, utilizing a tractor did provide a few advantages. Even though the finished product weighed over 25 tons due to the corrugated iron ‘superstructure’ which it had been draped with, the Semple tank could move about at an appreciable speed of 24 kilometers per hour thanks to its 6-cylinder diesel engine.  It also had 6 mounted Bren machine guns, ready to blast from any side which one might approach the tank.

This doesn’t sound so bad, but there were a few caveats. For one, you had to stop the tank to change gears, which is dangerous and frankly, a bit inconvenient. It was also heavy and without a lot of space, things could get quite crowded inside — to the point where one crewmember was expected to lie on a mattress inside in order to man one of the guns.

There simply wasn’t room for him to stand.

Whether the mattress was the straw that broke the camel’s back or not we couldn’t say, but Semple’s tank was considered ‘inefficient’ at best and ‘hilarious’ at the worst.

In the face of the ridicule which the tank received Bob would merely state “I had the vision to try and create something while a lot of others were just sniveling” and that’s fair enough, really. Could any of us have made a tank from a postcard?

Bless you, Bob Semple, for trying.