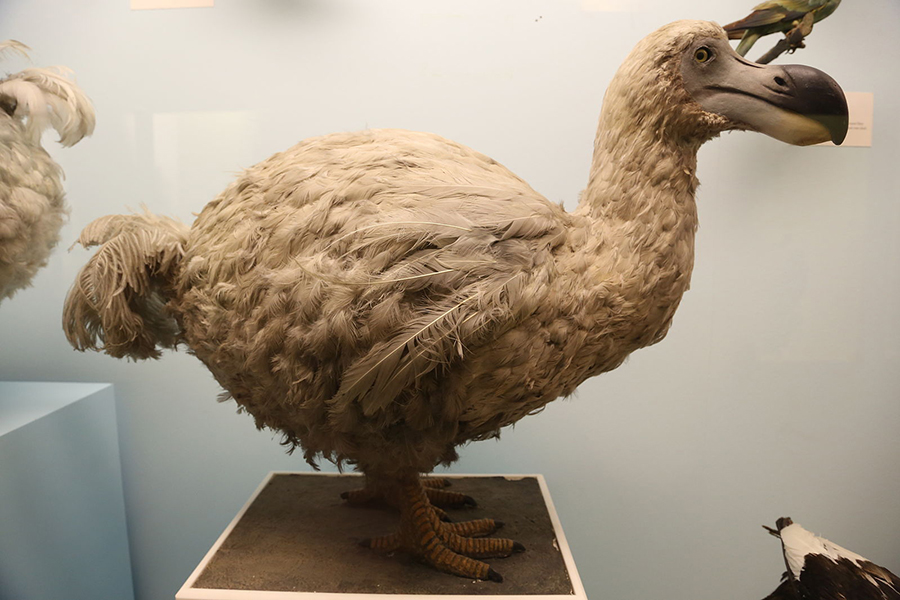 The rotund flightless bird associated with the Indian Ocean isle of Mauritius has become a prime example of species extinction during modern human times, coining the well-known phrase “as dead as a dodo.” Not much is known about the bird or its behavior, except for a few collections of writing from Dutch sailors’ observations when they set foot on the land in the late 16th century. Not a hundred years later, the last living bird was seen on the island.

While upon first glance, one would compare a dodo to an ostrich than any other fowl, the dodo’s closest living relative is, in fact, a pigeon. The dodo was depicted throughout history as a stout, clumsy bird, but scientists have recently considered that the bird likely gorged itself during the wet season when food was plentiful and then resorted to a leaner physique in drier times when food was sparse. The dodo’s form is unmistakable from any other fowl, extinct or otherwise. Scientists assume that the size of its wings in relation to its height is due to its having evolved on an island without the threat of large predators, and thus the bird had no need for flight, resulting in the shrinking of the flight muscles.

Did Dutch sailors cause the extinction of the dodo?

Although the extinction of the dodo is a well-known fact, there remains a lot of mystery surrounding the actual events which caused the eradication of the species. It has long since been believed that Dutch sailors were the singular cause of their demise, through excessive consumption of the tame and docile dodo. Arriving on Mauritius in 1598, Dutch sailors were said to have numbered only a few hundred, and due to the dense vegetation of the island, it is unlikely that they would have been able to access most of the difficult to reach dodo habitat and nesting sites. Excavated Dutch dwelling sites support this, showing a lack of dodo bones among the sailors’ meal remains. In subsequent years, scientists have surmised that the true cause of the species extinction may be due to the Dutch sailors—but not in the way you may think.

The introduction of domesticated livestock onto the island from the Dutch ships is likely to have been the primary cause of the elimination of the dodo. Pigs, dogs, rats, and cats are thought to have been radically competitive in terms of the food resources available on the island, while also preventing the positive succession of the species through destroying dodo nests and eating their eggs. It is possible that the menagerie of domestic animals outcompeted the dodo from its island, sending the species over the brink of extinction.

Along with the influence of their animals, the Dutch sailors are also likely to have contributed to the dwindling dodo numbers through their impact on the bird’s forest habitat, along with a few reports of mass killings of dodos to be used as ship provisions.

Even scientists couldn’t admit the dodo was gone

The scientists of the 17th century had never been faced with the extinction of a species within a lifetime, and therefore refused to admit that the dodo was in fact gone from the island forever. A handful of dodo specimens were transported to Europe to be studied and displayed in museums, but the crude taxidermy and resources available resulted in the loss of the few specimens that had been obtained at the time. Not realizing the severity of the extinction, scientists likely assumed that the lost or damaged specimens could simply be replaced by others.

Read more: Scientists on the Brink of Creating a Tusk-less Elephant-Mammoth to Foil Ivory Poachers

One of the greatest discoveries in the history of the dodo took place in 1865, where a railway excavation team uncovered a marshland full of preserved dodo bones. Mare aux Songes provided the bones to enable scientists to assemble a composite skeleton, made up from several individual dodos.

While a composite is not ideal, it is certainly better than a complete absence of a skeleton, and it allowed scientists to gather valuable information about the bird.

However, the most successful paleontological find in the history of the dodo by far was that of a budding Mauritian naturalist, Louis Etienne Thirioux. His enthusiasm for discovering local biological treasure led him to discover dodo remains in the early 20th century. His discovery was however brushed off, and it was only after his death that his find was given the credit it deserved—for Thirioux had uncovered the near complete skeletons of two individual dodos. The detail of these skeletons allowed scientists insight into valuable nuances providing information about the movement and behaviour of the bird, previously unknown to science.

Since Thirioux’s quiet discovery and the absence of information regarding its exact location, little additional dodo remains of value have been found since. While the dodo met its fate in only a short number of years, the peculiar fowl lives on as an exemplary case of the damage that can be done to the natural world through human ignorance and action.