Why Did the Chicken Cross the Pacific?

Written By Steven Cruse
in Nature 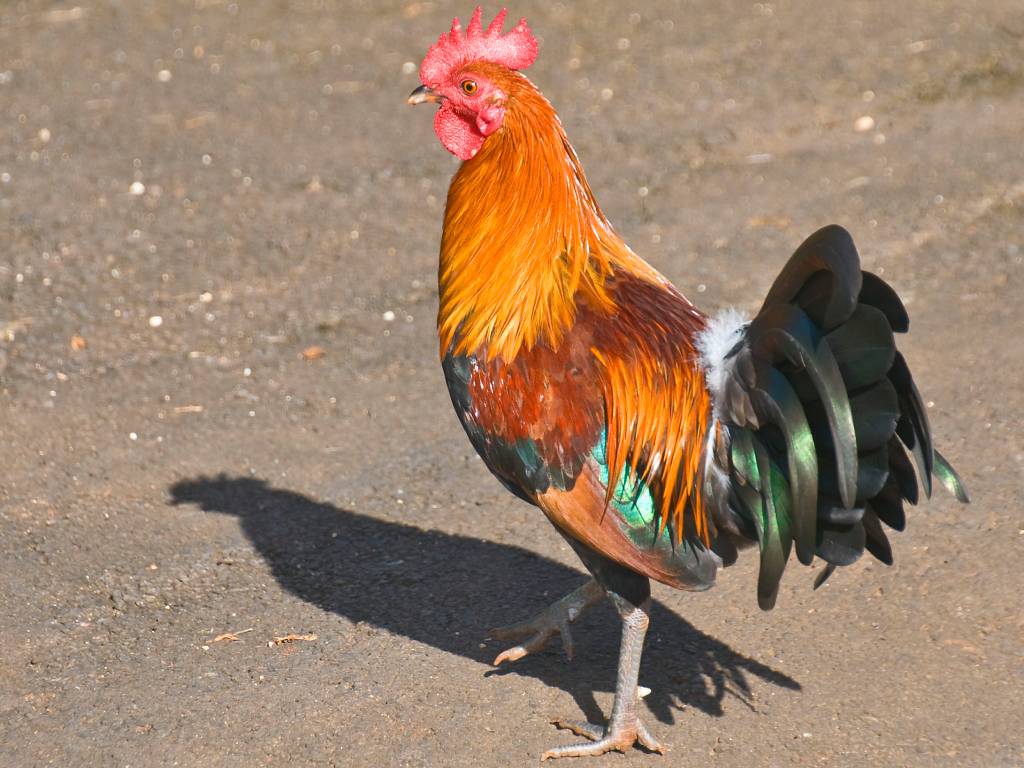 Alright, so maybe an abundance of poultry isn’t what you pictured. But they’re there. A wild chicken population roams the Hawaiian islands. At least one of them, anyway.

How did a bunch of wild chickens end up in Hawaii?

Tourists to Kauai are amused and confused by the presence of the wild birds. It’s not uncommon to see families of chickens plodding across parking lots or pecking around customers’ feet in local restaurants.

The question is, how could such a remote set of islands develop such a large number of non-indigenous species?

We have to go back centuries to when the first adventurers settled the islands to find the answer. Intrepid Polynesians brought red junglefowl to the island, stowing them away on boats as they ventured across the ocean. The excellent climate allowed the fowl to thrive, growing in numbers and becoming a pretty dominant species on the island without any other mammals. Jungle fowl are the ancestors of modern-day domestic chickens.

But centuries later, Captain Cook’s landing shifted the balance of things for the fowl. The famous explorer and his crews brought different animals with them, including dogs, hogs, and of course, stowaway rats. Mongooses were let loose on the islands to hunt rats but instead stumbled across some easier-to-catch birds, the Hawaii chickens.

Today, Kauai’s wild chickens are the most dominant of all the islands because Kauai was the only island not to have mongooses. The other islands have wild chickens, but not in the same numbers as Kauai. So one of the chicken’s biggest natural predators is gone!

So the original birds came from Polynesia, but another group of people added to Kauai’s wild chicken population.

Years after Captain Cook’s voyages, Filipino’s began to appear on the island. They didn’t bring jungle fowl but their pet chickens to Kauai. Although not in the traditional sense.

One of the Filipino’s favorite hobbies was cock fighting. Naturally, the hobby favors stronger and more aggressive birds. For now, the newcomers from Southeast Asia were not interfering with the balance of the island, but these chickens were not suitable for farming. Neither the cock fighting chickens nor the wild fowl was particularly good for laying eggs. Nor were they usually big enough to provide a good meal.

So the island residents brought their modern species, built for breeding, to lay eggs, and of course, for meat.

The stage was set on Kauai. Descendants of Polynesian red junglefowl, fighting chickens, and regular chickens all inhabited the island. Only the jungle fowl were wild, aside from a few that may have escaped.

But in 1982, Hurricane Iwa hit the islands, tearing through Kauai, and importantly for our story, it destroyed domestic coops. With many domesticated birds inadvertently released into the wild, breeding was bound to happen.

A decade later, Hurricane Iniki ravaged the area once more, setting free even more chickens from backyard flocks to integrate with the wild ones already living the free-range life.

The story behind Kauai’s wild chickens had always been assumed in local lore. They helped symbolize a natural link to the history of the people who settled in Hawaii. But what is the scientific truth of the matter?

National Geographic even covered the wild chickens in 2018. And along with a few scientists running genetic tests, it was confirmed that Kauai’s wild chicken population was indeed the cross-bred product of several birds – wild fowl, modern domesticated birds, and fighting cocks from Southeast Asia.

And Kauai’s lack of a natural predator provided the perfect environment to provide so many chickens.

Are they good for Hawaii?

It’s a complex question about whether the wild chickens benefit or hurt Kauai.

Tourists love the Kauai chickens. And of course, where there are tourists, there is money. All over Kauai, shops selling t-shirts and mugs with the chickens depicted on them are making a killing over their feral birds (as some would call them).

Some of the supporters of the wild chickens say they’re good for the local environment in some ways. They eat bugs that cause problems for farmers, which is always a good thing, right?

Wild seems much more interesting to visitors. But unfortunately, the wild chickens are the bane of some farmer’s existence. For all the bugs they eat, they tear up grass and foliage. As they work their way around people’s gardens, they often destroy vegetables and other crops. Usually, the farmers are the ones referring to them as feral chickens.

The chickens have rights!

Despite some locals’ frustration, the chickens are protected animals on Kauai.

State law prevents people from harming the birds, regardless of how annoying the roosters are in the morning. Although some farmers killed them in the past, the bird does not make for good eating. The meat from the Kauai Chicken is notoriously tough, and the eggs produced by the hens are equally rotten.

Now, a frustrated restaurant owner has to be careful when he has a bird pecking around at his customers’ feet. Maybe some more chicken on the menu would help keep them away.

Regardless of the locals’ view on them, the roosters and hens going truly free-range in Kauai are a breed of chicken that is not going anywhere. The outlook is good with protection, no predators, and a thriving little tourism industry working around them.

The Penis Snake: Contender For Most Appropriately Named Creature