Written By Lydia Serrant
in Culture 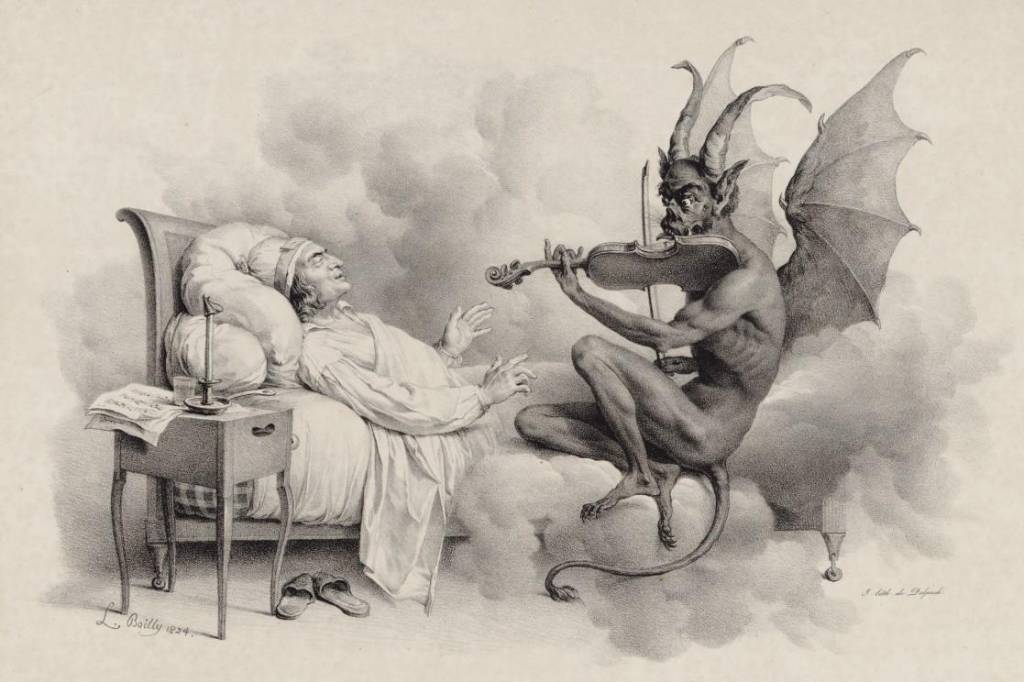 It’s the middle of the night, and you suddenly wake.

However, you realize that this is not an ordinary case of insomnia. You can’t move, your arms and legs glued to the bed, and you sense an evil presence in the room.

Welcome to sleep paralysis, and the demonic presence feels like a dead body climbed on your chest and is suffocating you.

But don’t worry, you are not alone. Sleep paralysis is an age-old condition experienced by at least 50% of the population at some time or another.

This article explores exactly what is going on when the Demon of Sleep comes to visit and what you can do to keep him at bay.

What is sleep paralysis?

Sleep paralysis is the experience of waking up from deep sleep and being unable to move. A menacing figure or presence usually accompanies the condition, often called a ‘Sleep Demon,’ and the sleeper either feels that the Demon is resting on top of them or lurking next to them near the bed.

Those who experience this phenomenon often feel trapped inside their bodies and left to the mercy of the Demon. They try to scream but can only manage a puny whelp as they try to rouse their inanimate muscles back to life to flee from the Demon of Dreams.

The Sleep Demon comes in many forms and has been attributed to perceived alien abductions and nighttime sightings of supernatural beings.

Sleep paralysis is a type of sleep disorder that is perfectly normal and explained by sleep scientists.

Sleep paralysis occurs somewhere during your nighttime slumber when your brain and your body have stopped communicating effectively, and your system is out of sync.

When we fall asleep, our brains send a signal to our muscles to remain inactive. This temporary paralysis is essential for a good night’s sleep and ensures that we do not harm ourselves or terrorize our sleeping partners by acting out our dream states.

People experience sleep paralysis when the reverse signal, which tells our muscles to wake up with us, gets lost somewhere along the neural pathway. This failed message keeps our muscles in a state of paralysis, and our conscious minds are left to wander, imprisoned within the body.

Usually, but not always, our previous dream state spills over into wakefulness which explains the waking nightmare hallucinations and the sleep demons.

Known as hypnopompic hallucinations, the newly awakened sleeper can hear, feel, and see things that are not there. The hallucinations usually last only a matter of seconds, but to the sleep paralyzed, a few moments can feel much longer.

Hypmopomic hallucinations can occur with or without sleep paralysis. However, they are often accompanied by a sense of tension or threat, suffocation, spinning, falling, or floating.

The long history of sleep paralysis

We have a complete and reasonable explanation for sleep paralysis, thanks to science. However, our ancestors had to rely on spiritual and cultural explanations for what was going on.

The first documented case of sleep paralysis was from ancient Mesopotamia (c. 2000 BC), which describes the phenomena following supernatural beliefs.

The Mesopotamians and the Romans who came after them believed that sleep paralysis resulted from an ‘Incubus,’ a mythological male demon that was believed to haunt women’s bedrooms and force themselves upon them.

The Incubus was said to paralyze the victim by sitting on their throat, so they could not move or scream for help. The female version of this spirit, known as a ‘Succubus’ was primarily blamed for sleep paralysis in men. For the ancients, these were perfectly reasonable explanations.

The ‘Succubus of Sleep’ or ‘Old Hag’ syndrome descends from the legend of Lilith. Lillith was Adams’ first wife cast out of Eden for trying to ‘mount’ him. She became a Demoness who took her revenge by mounting mortal men as they slept.

Dr. Diemerbroeck described the menacing presence as a devil who ‘lay upon her and held her down.’

Known in 17th century Europe as the Night-mare, from which we derive the modern term, the patient experienced the sensation of being held down and choked by a dog or thief lying on top of her.

Today the word ‘mare’ is associated with horses, but the Anglo-Saxons initially used it to describe female goblins or evil spirits. It appears that Folklore and fairytales were still part of Dr. Diemerbroeck’s diagnostic toolkit.

Almost 300 years later, in 1991, the Demon of sleep paralysis was used to explain incidences of sudden death in young Southeast Asian men.

Since 1977 over 100 men belonging to the Laotian-Hmong community have died mysteriously in their sleep.

Known as Sudden Unexplained Nocturnal Death Syndrome (SUNDS), one study found a link between sleep paralysis and these incidences of nocturnal death.

All the ‘victims’ were young, healthy, and had a median age of 33. To this day, sleep paralysis remains the only identifiable link to SUNDS, and any other causes remain unknown.

The sleep paralysis demon has taken on many names and forms in other cultures, most associated with the paranormal.

In Turkish culture, sleep paralysis is Karabasan or ‘The Dark Assailer,’ who creeps into the bedroom at night and steals your breath.

Sleep paralysis is known as Kanashibari ‘Bound in Metal’ in Japanese Folklore. The ancient Japanese believed that the condition resulted from a spell cast by the Buddhist Priests of Onmyodo Shugendo and was used to subdue opponents or cast out evil spirits that had manifested within the sleeper.

In Arab-speaking cultures, it is known as Ja-thoom, which translates as ‘what sits heavily on something.’ Ancient Arab Muslims believed that you could only protect yourself from the condition by sleeping on your right side or reading the Throne Verse of the Qu’ran before sleeping.

In Mongolia sleep, paralysis is khar darakh, meaning ‘to be pressed by the Black.’ Mongolians believed that the sleep demon was the sleeper’s dark side personified. It reflected their ability or desire to perform dark magic or that a Black Shaman had visited during the night.

Khar darakh is the origin of the word Kanashibari – The Turkish word for sleep paralysis. Both phrases mean darkness or dark presence and are a linguistic echo of pre-Islamic times when both cultures shared a single ancestry – and further evidence of how far back sleep paralysis experiences go.

According to sleep research, sleep paralysis occurs due to sleep deprivation, poor sleep quality, sleep apnea, and a whole host of other sleep disorders.

According to medical perspectives, Recurrent Isolated Sleep Paralysis is a neuropsychiatric disease whereby the brain continuously misfires during REM sleep or as the patient falls asleep. A terrifying experience that leaves the patient afraid to go to bed.

It is believed to be triggered by certain medications or anxiety, worsening with each episode. The patient is stuck in a loop of perpetual fear, and the condition worsens over time.

How can sleep paralysis be treated?

There is no known cure for sleep paralysis. Still, experts suggest that maintaining good sleep schedules, applying relaxation techniques, and sleeping in a supine position can assist in keeping the Sleep Demon at bay.

Likely, a disrupted sleep cycle, inconsistent sleep and waking times, and lack of quality REM sleep can all contribute to the phenomena and increase incidences of sleep paralysis.

The Demon of Dreams has been haunting our bedrooms for centuries. Attributed to the supernatural, demons, ghosts, shamans, or wayward Buddhists, sleep paralysis is an authentic and common experience shared between cultures and generations.

Today, we are comforted in the knowledge that sleep paralysis is triggered by a neurological event that is perfectly harmless and explainable.

However, our ancestors weren’t so lucky. To them, sleep paralysis could only be described as a spiritual experience that was understood through a particular cultural filter.

Despite many studies into sleep paralysis, there is no known cure, but preventative measures can be taken. Maintaining good sleep hygiene and keeping stress low appears to be the most effective shield against sleep paralysis and the Demon of Darkness.

Why Did the Chicken Cross the Pacific?