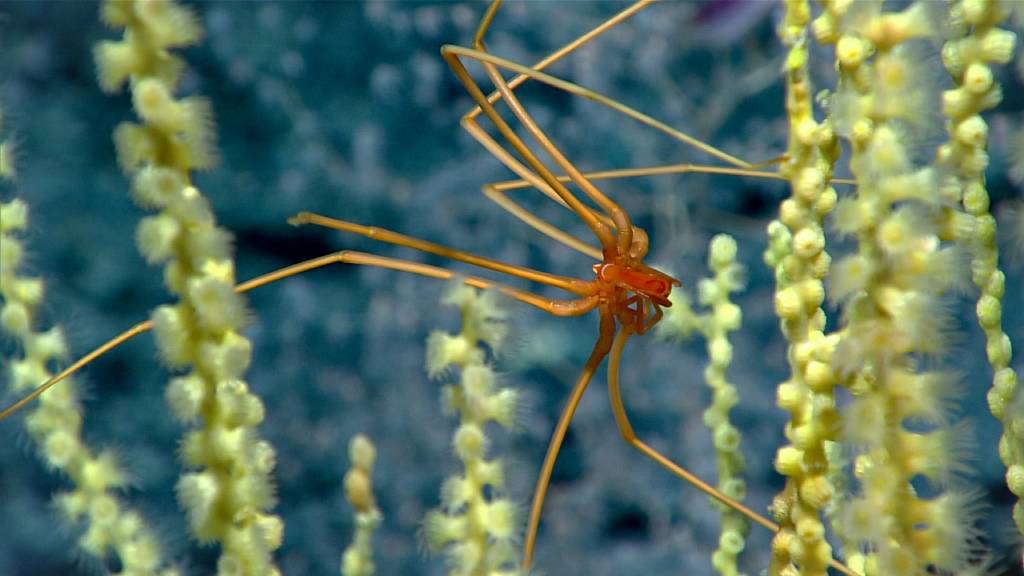 This sea spider was observed at about 1,675 meters depth on a bamboo coral that has been colonized by yellow parazoanthids. (Photo: Flickr/NOAA)

We know of the eight-legged creepy crawlies on land but, have you heard of their cousin the Sea Spider? Although they’re Arthropods, they belong to a different class – Pycnogonida. These beautiful creatures live in the Deep Seas of Antarctica, Africa, South America, and Madagascar.

Pycnogonids have four pairs of stilt-like legs to swim, strut or even crawl among animals and plants. However, Sea Spiders in their natural habitat grow as big as 50cm (20 inches)! Those in shallow waters are so small you can hardly see their 3mm (1/8 inches) frame.

Adult pycnogonids have long legs that stretch across a dinner plate! That’s why it’s in the order of Pantopoda, meaning “All Legs.” Each limb is 25cm long at its peak – no wonder some people call it a “Whip Scorpion!”

If the Sea Spider is all limbs, how does it breathe?

With spindly walking legs and a body so small, this eight-legged beauty breathes through its limbs. It has no gills or lungs, but it absorbs oxygen in the ocean through the cuticle on its skin.

The Giant Sea Spider has a complex circulatory system – it pumps blood from its gut! Marine Biologist at the University of Hawaii Manoa, Amy Moran, says, “It’s been unclear for a long time how they move oxygen through their bodies.” Out of curiosity, she and her team ran a test to find out.

They put some specimens in low-oxygen water to study their reaction. When they injected the sea spider’s heart with a fluorescent dye, they saw blood go everywhere in the body except the limbs. Then they put electrodes in the limbs to check the oxygen levels. The scientists noticed a sped-up contraction in their guts. It was like a human gasping for air with an increased heart rate.

The result – Gut contractions move oxygen around the body. You can find more information on the Colossendeis sp. in the Current Biology journal of July 10, 2017.

Although they’re several species with separate circulatory systems, theirs is complex. According to Louis Burnett, a comparative physiologist at the College of Charleston in South Carolina, “the way they [circulate oxygen] is unique.”

Where does the food go?

Staring at this Southern Ocean creature, you wonder how it feeds? You can only see legs, but where’s the mouth? Surely, sea spiders can’t be all appendages!

The sea spider doesn’t spin a web to catch prey like its land cousin. This pycnogonid species feeds through its tube-like proboscis.

The Giant Sea Spider (Colossendeis sp.) grabs its prey with its elongated proboscis. It sucks the juices from soft-bodied animals like Jellyfish, Hydroids, Sea anemones, Worms, and Invertebrates. That makes it a carnivorous animal, although it occasionally eats other organisms like algae.

The bright-colored Colossendeis sp. blends with nature and animals like anemones when feeding. That’s its way of warning predators away.

Each of the eight legs serves a unique purpose for the giant sea spiders. One pair houses a tube-like digestive tract for food processing.

The male Sea Spider is a Super Dad

The Southern Ocean Sea Spiders have separate sexes. Females have ovaries, and Males have testis that projects dorsally from their digestive system. Pycnogonids have their reproductive organs in their spindly legs. External fertilization forms eggs after a brief courtship of both sexes.

The Sea Spider forms a parasitic relationship with Polychaetas and Clams in its larval state. It needs the host to feed until it can hunt on its own. The males care for the eggs by keeping them under their legs before they mature.

Once the egg hatches, the larvae and juveniles attach themselves to the male sea spider’s ovigerous limbs – the offspring forms a donut shape around the parent’s ankle until it grows two or three stalks. Then it can move around like a free-living adult.

Is the Giant Sea Spider a single species in the deep sea?

There are over 600 living species of the Giant Sea Spider (Colossendeis sp.). It’s not the only type to exist in the ocean world.

This species typically has eight limbs – the extra appendages are for grooming, courtship, and nurturing. In Germany, Florian Leese of the Ruhr University, Bochum claims some have 10-12 limbs!

He studied their genes, saying we can only recognize five out of these distinct species. They migrated and formed hybrids to survive during ice-cold weather.

Over the years, the Colossendeis sp. broke down into cryptic species. Today, each group is scattered across oceans. Leese warns us about the danger of “calling distinct mitochondrial lineages species.”

The sea spider is one species that needs more research. The world has so much more to learn!

Sea spiders have eight limbs like true spiders – it’s easy to see how you’ll get confused. They’re, however, not the same. If you have arachnophobia, you can relax – Sea Spiders aren’t actual Spiders.

They share the same Arthropod phylum with the arachnids but belong to the class Pycnogonida. Most Pygnoconids reside in the deep sea, not freshwater or land.

You’ll find these species in polar regions. Unless you plan to visit the deep sea in Antarctica like Moran and her colleagues, you’re safe.

Is the Sea Spider a crab?

Sea Spiders and Crustaceans are from the same subphylum – Chelicerates. They share this group with Horseshoe Crabs, Scorpions, and Mites. Although they have segmented bodies and cuticle-covered limbs, they’re entirely different marine animals.

The Sea Spiders are of the order Pantopoda. The similarities in their offspring made people mistake Pycnogonids with Crabs. The most obvious difference is that most pycnogonids have genital openings on their legs.

Also, the deepwater arthropods don’t have eyes. According to MBARI, sea spiders are “widespread and occur across various ocean environments.”

Camazotz: Bat to the Bone, Arbiter of Justice or Pure Myth?