The Wrap Around Spider and the Man Who Discovered It 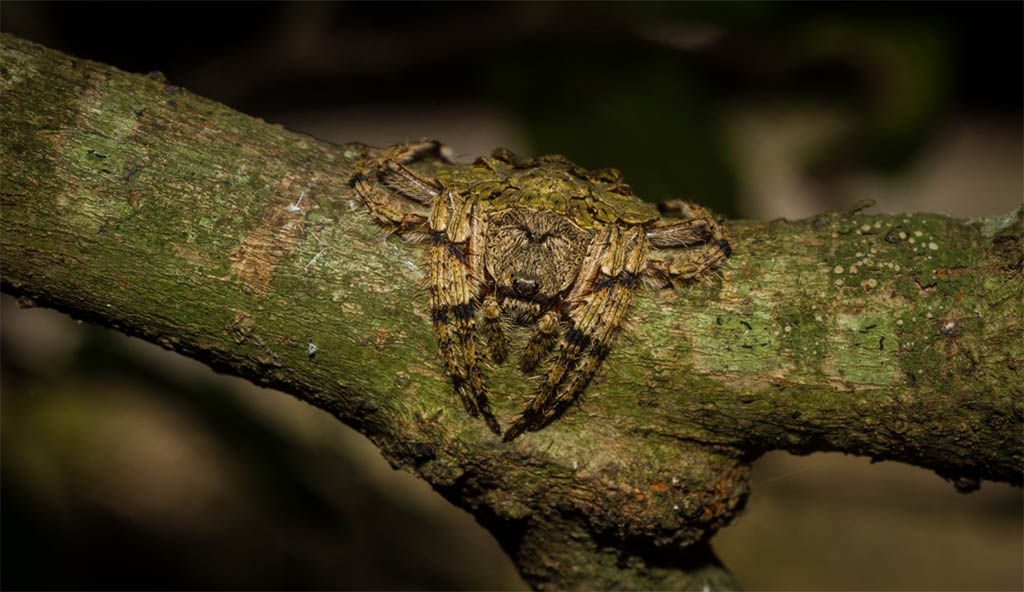 Found in Western Austraslia, Dolophones conifera, also known as the wrap-around spider, can wrap itself around limbs of trees as camouflage. (Photo: Flickr/Dustaway CC BY-NC 2.0)

If you ever visit the Australian bush, we’re certain you’ll never lean casually or confidently on a tree. The camouflage employed by the wrap around spider is quite effective and not as simple as it looks. This spider not only has small, slit discs on the upper part of its body to help it blend with its surroundings, but also has a neat little addition to help it in hiding effectively… a concavity in its abdomen.

Yes, it really does “wrap around” that tree.

Wrap around spiders only hide during the day, however. At night, they “come alive,” spinning vertical orb webs and eating what they can trap until sunrise, when they once again go into hiding on their favorite tree.

Is the wrap around spider dangerous?

As far as danger goes, you’ll be happy to know that while wrap-around spiders are venomous, their venom is not caustic enough to cause problems with a human—so if one bites you, you may be scared and irritated, but you certainly won’t drop dead. Also, while they look scary in photos, they’re actually quite diminutive. Females are approximately 0.35 inches (9 mm) long, while males are only 0.19 to 0.20 inches (about 5 mm) long. 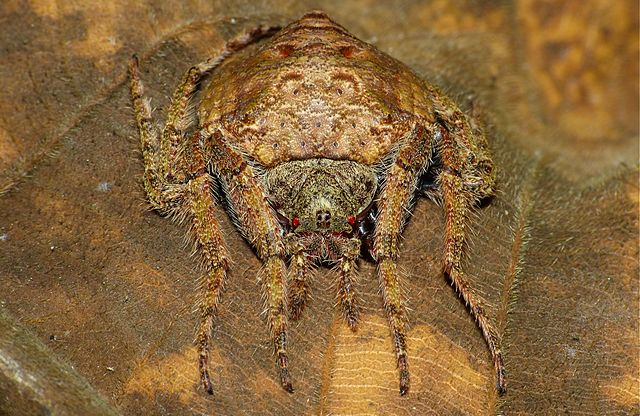 Found only in Western Australia, wrap-around spiders generally stick to trees, though also occasionally take to the ground. So if you go to Australia, try to remember that these creatures may be hiding on innocent-looking trees.

Discovered by a noble character

The wrap around spider, also known as Dolophones conifera, can credit its discovery to Count Eugen Wilhelm Theodor von Keyserling. This is quite the name, but the Keyserling (originally Keselingk) family earned a bit of nobility for itself some time ago, when an ancestor of the Count’s named Hermann (the son of a mayor) did a bit of crusading and attained knighthood while serving under the Brethren of the Sword in 1492. Once Hermann attained knighthood, the family worked their way up to the noble rank of Baron by 1631, and by 1742, the first Keyserlingk Count was created by Frederick August, King of Poland. Oddly enough, this Keyserlingk’s name was also Hermann.

Read more: The Deadliest Caterpillar On The Planet – Lonomia obliqua

Born in 1832, in Pokroy, Lithuania, Count Eugen became an arachnologist. How his family felt about this, we don’t know: his family called him “Spiders Keyserling,” but we’re not sure if it was said with good humor).

Regardless, from 1856 to 1864, Count Eugen began travelling extensively and joined many research expeditions, before meeting his future wife, Margarete, in Switzerland.

She must have been quite the gal, as Eugen promptly decided to buy large tracts of land in Silesia, Poland, and to settle down for a peaceful life of agriculture.

The Count later moved to Munich and began classifying spiders that his American friends would send him, eventually writing the much-acclaimed Die Spinnen Amerikas (The Spiders of America)—and probably giving Margarete a fright or two with those first-arriving boxes of spiders. He was even a bit of an artist, providing sharp and detailed illustrations.

In 1886, about three years before his death from cerebral tuberculomas (a serious form of tuberculosis), Count Eugen shared his knowledge of the wrap around spider and made the little arachnid “official.”

Incidentally, after Eugen died, his son Robert offered his father’s 10,000-spider collection to the Berlin Museum, but they declined. The collection was instead purchased by the Museum of Natural Sciences in London.

Oh, come on now, would you have kept the spiders?

The chicken bus experience in Guatemala is bucket list material