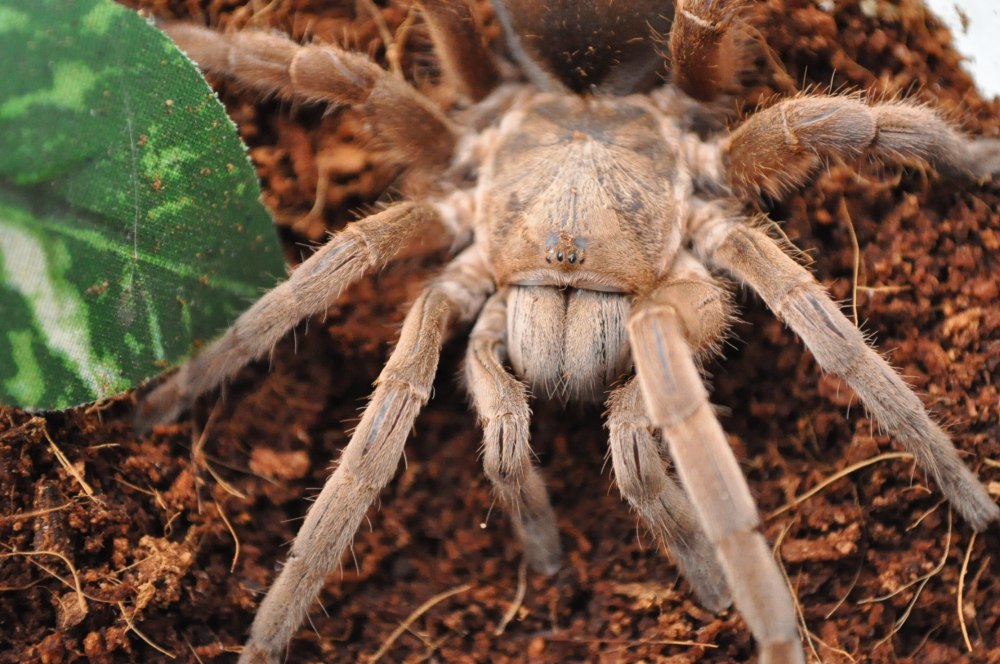 One can only speculate what the creature behind a name like “bird eating spider” looks like. The Goliath birdeater is a grand title befitting the largest spider on the planet, sporting a leg span second only to that of the huntsman spider. This golden-brown tarantula undeniably boasts Goliath proportions, being up to 6 ounces (170 g) in weight and 11 inches (28 cm) in length.

All species under the Theraphosa genus were given the name “bird eaters” as a result of an engraving dating back to the 18th century that depicted a tarantula preying upon a hummingbird. Despite its namesake, the bird eating spider is more likely to be found dining upon small rodents, amphibians, and a variety of insects. Its method of consumption, however, is far from conventional. After ambushing its prey, the Goliath birdeater makes use of its inch-long fangs to inject neurotoxins. The sheer size of the spider allows it the strength to then drag the kill back to its burrow, where the effects of the toxins liquify the insides of the prey, allowing the spider to gulp them down in liquid form.

The bird eating spider is a terrestrial creature. It can be found burrowing in damp, swamp-like areas throughout the rainforests of northern South America. As these arachnids are nocturnal critters, most of their activity takes place under the cover of darkness. This species has a large lifespan, with females living for up to 25 years. In comparison, the males lead somewhat less impressive existences, reaching their end in at most six years, shortly after maturation. The female bird eating spider displays impressive postnatal care for her few hundred hatchlings—these spiderlings enjoy the protection of Mother Goliath for up to three years.

Although its neurotoxins are fatal to the critters they prey upon, the bird eating spider cannot cause much damage to a human being—aside from packing a painful bite and leaving a laceration. The bite of a Goliath birdeater has been compared to being of similar intensity as a wasp sting. Luckily, these spiders usually only attack as a manner of self-defense—and they do not always inject venom when provoked. Surprisingly, their impressive fangs are not their most effective form of defense. Tiny needle-like bristles, known as urticating hairs, coat the spider’s abdomen, and can be used as a defense system when the spider is attacked or threatened. Rubbing its rear legs against its body frees these hairs in the direction of the predator, temporarily disabling them and preventing an attack. The female also utilizes these hairs as a layer of protection lining her egg sacs.

The sight and size of the bird eating spider is enough to send any borderline arachnophobe running. Despite their name and terrifying size, these spiders are often sought as a culinary delicacy—and in some countries roasted upon a spit.