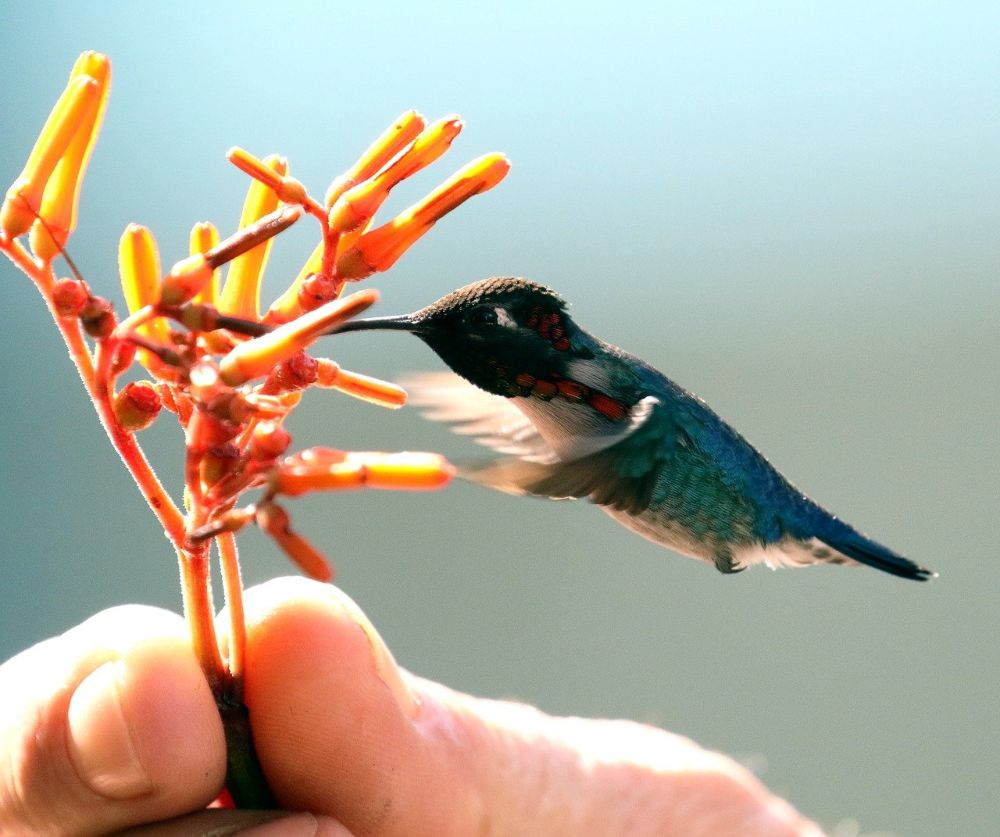 The zunzuncito, or bee hummingbird, is native to Cuba. It evolved into its tiny size so as not to compete with its larger relative, the emerald hummingbird, for resources. (Photo: Pixabay/Anne & Saturnino Miranda)

Being the size of a large insect with the metabolism of a bird is not easy. The world’s smallest bird—the zunzuncito—has quite a few tricks to cope with the challenges of being tiny.

If you’re ever in a flowery garden in Cuba, you may want to think twice before swatting at a large insect flying close to you. That’s because the Cuban islands are home to the world’s smallest bird: the zunzuncito, or bee hummingbird, which is often mistaken for a bee. Most birds of this species, Mellisuga helenae, measure a mere 2.2 to 2.4 inches (about 5.6 to 6.1 cm) in length and weigh between 0.07 to 0.09 ounces (about 2.0 to 2.6 g). That’s the weight of half a teaspoon of sugar and about a third of the length of the same teaspoon.

The female vs. male zunzuncito

The female bee hummingbird is marginally larger and slightly greener than its male counterpart, which is normally smaller and bluer. When the male zunzuncito is ready to court, the feathers around its neck and head turn pink. The female builds cute cup-shaped little nests of about one inch (2.5 cm) in diameter, made of cobwebs, bark, and lichen, and lined with soft plant fibres. It may mate with several males. When the female zunzuncito is ready, it lays two eggs the size of coffee beans and gets ready to raise its chicks as a single mother. The female bird is quite paranoid, waiting outside its nest to check for predators before going inside. You would be paranoid too if you were that size!

The benefit of being small

Being small is not necessarily easy. In wild, untamed nature, it makes you more likely to become prey, and it takes a lot of energy to maintain your tiny body. So what is the benefit of a hummingbird being this small?

Ecologist Bo Dalsgaard from the University of Copenhagen explains it well. In the Caribbean, there are always two to three hummingbird species in any community. And always, there is a big one and a small one. This is true in Cuba as well, which has a bigger emerald hummingbird in addition to the zunzuncito. Dalsgaard told Wired magazine that the bee hummingbird probably didn’t want to compete with its bigger relative for food, so it adapted to feed on smaller flowers that are more suited to insects. Since there’s less insect diversity on these islands than on the mainland, the insect niche in the ecosystem is fairly open and food is easily available.

The downside to being small

Birds are warm-blooded. Though this has its advantages, it can be a real pain for tiny birds. The smaller they are, the bigger the ratio of their exposed surface area to the volume of their bodies. Consequently, they make heat all the time, but lose it very, very easily. To make things worse, the zunzuncito beats its wings up to 200 times per second and flies at 25 to 30 miles per hour (40 to 48 km/h), which is about a third of the speed of a curveball in baseball. All this beating of the wings and flying requires energy.

Because of these massive energy needs, a hummingbird usually eats about half its weight in nectar and tiny insects every day. To do this, it visits about 1,500 flowers in a day and pollinates many flowers in the process. But that amount of food isn’t enough. The zunzuncito, or bee hummingbird, goes into a state of torpor (just like other hummingbirds), similar to hibernation, only more short term. The bee hummingbird can go into daily torpor, reducing its energy use drastically overnight. This is especially useful on colder nights and during thunderstorms when feeding isn’t possible. There is a downside of course: torpor makes the zunzuncito much less alert, making it vulnerable to predators.

The bee hummingbird seem to be living a fairly happy life in Cuba at the moment. It is currently classified as near threatened, mostly due to a loss of habitat, so only time will tell whether its story will end with a happily ever after.