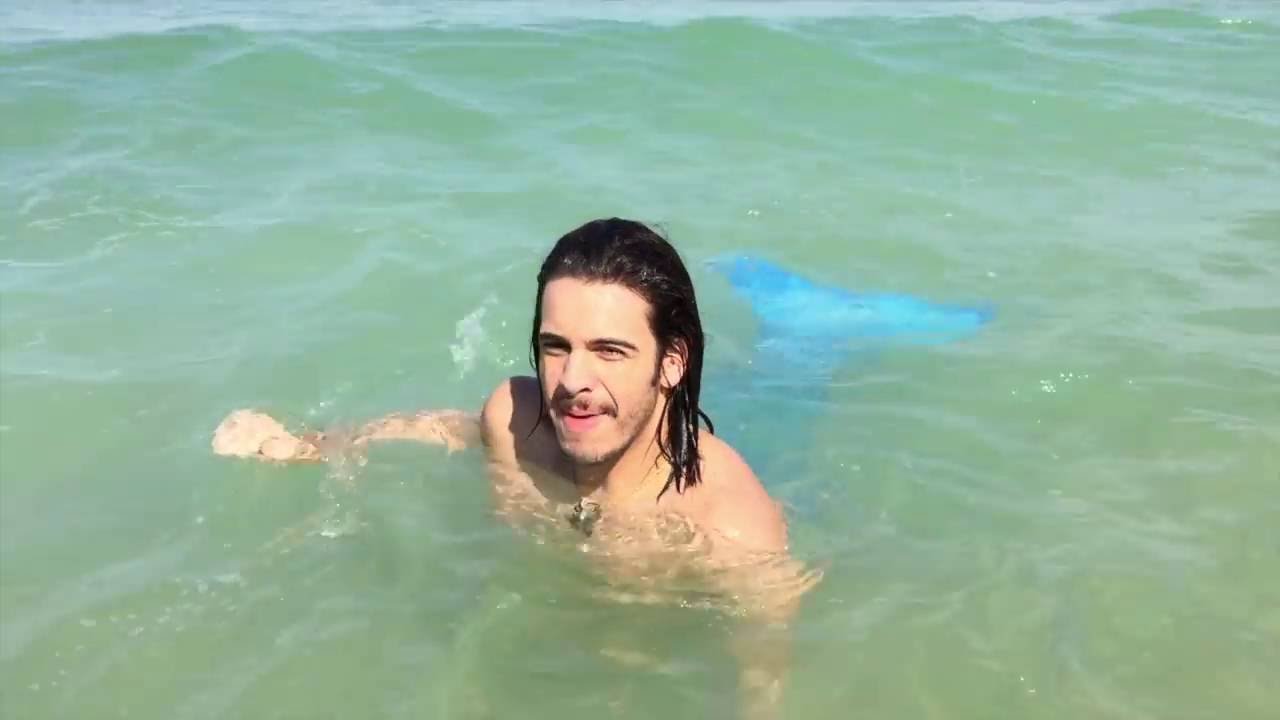 Davi Moreira, a 22-year-old Brazilian, loves spending time swimming in the sea during the long hot Brazilian days. But that’s not all: he feels such an affinity with the sea that he likes to believe he’s actually living in it. When he dons one of his five, custom-made neoprene mermaid’s tails, this young man becomes a real life merman.

Moreira claims that he’s always identified with all things aquatic. His father was a fisherman and so he’s lived near the sea his whole life. “I felt as if the sea was my home”, Davi says. When he’s in the water, he feels like a different person.

His idea to become a real life sereio (merman in Portuguese) was inspired by his love of Disney’s popular animated movie, The Little Mermaid. He’s so serious about his lifestyle and his passion,that he has a home full of Ariel-themed memorabilia, such as dolls, mugs, and clothing; he even has a bed throw with a picture of the redheaded mermaid. And even when he leaves his home, Ariel is always with him in the form of a tattoo, inked on his arm.

If all that wasn’t enough, he’s even recorded his own parody version of the Disney classic on YouTube, acting as ‘Davi Sereio’, or ‘Davi Mermaid’ in Portuguese, the persona he has adopted.

Moreira’s lifestyle gets all kinds of positive comments and good reactions, but not everyone accepts him for who he is. Some insult him, saying he should get psychological help. To this, Moreira says, “People laugh at me because I’m different, but I laugh back because they are all the same.” He is well aware that what he’s doing is just make-believe; he’s not trying to escape real life, it just makes him happy.

Brazil has a tradition of believing in mermaids; their sea goddess, Yemanja, is based on the African goddess Yemoja, who is often depicted as a mermaid.

There is another widely loved mermaid in Brazil – a free spirited mermaid with a big orange tail portrayed by the actress Isis Valverde in the popular telenovela, A Forca de Querer (The Force of Will). Behind her on-screen swimming abilities is Mirella Ferraz, who likes to describe herself as Brazil’s “first professional mermaid.” Ferraz, 34, had to endure years of mockery because of her passion, but is now happy that this lifestyle is becoming fashionable, although she’d prefer it if people actually showed interest in learning about the myth of the sirens and her environmental activism, rather than doing it just for appearances. Ferraz estimates there are about 1,000 mermaid aficionados in Brazil.

It might be true that many are doing this for show, but to Moreira, this is a true lifestyle. “For many it might be a fad, but not for me”, he says. The only thing that he lacks to complete his mermaid persona, he jokes, is the ability to sing. Despite the fact that not everyone approves of his passion, Moreira says he will continue doing this as long as it makes him happy.

Starburst dress made from candy wrappers has the wow factor