Behind the Walls of the Amber Room

Written By Hannah Weiss
in Visit 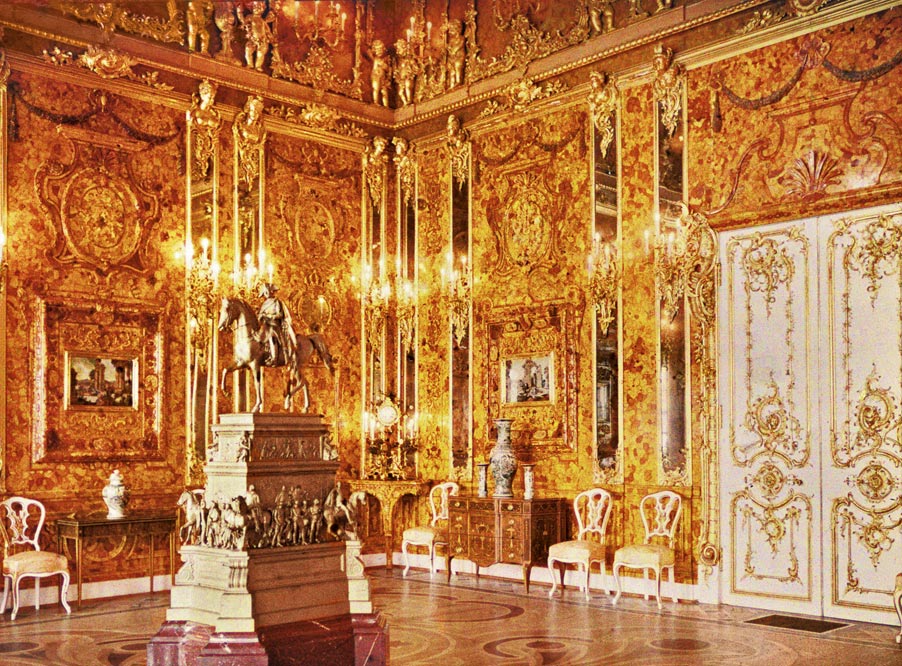 Construction of the original Amber Room started in Prussia in the year 1701. The room was gifted to Russian czar Peter the Great by Friedrich I, during a state visit to Prussia in 1716. (Photo: Wikimedia/Andrey Zeest)

All known records of the Amber Room indicate that it was a spectacular sight to behold. With jewel-encrusted amber walls that glowed in the candlelight, you can imagine why it was referred to as the Eighth Wonder of the World. While we can picture what it might have been like to stand inside its golden walls, there is no way to experience it ourselves—the room has been lost for nearly eight decades. The circumstances behind its disappearance are contested, and ultimately remain a mystery.

The Amber Room was begun in 1701. Its construction was an international collaboration, with work from German sculptor Andreas Schlüter and amber from Danish craftsman Gottfried Wolfram.

“When the work was finished, the room was dazzling,” wrote the art historians Konstantin Akinsha and Grigorii Kozlov. “It was illuminated by 565 candles whose light was reflected in the warm gold surface of the amber and sparkled in the mirrors, gilt, and mosaics.”

The room was originally located in Charlottenburg Palace, home of Friedrich I, the first King of Prussia. After Russian czar Peter the Great expressed his admiration of the room during his 1716 visit to Prussia, the King of Prussia gave it to him as a symbol of peace between the two nations, with the goal of cementing their alliance against Sweden.

The room was transported to Russia in boxes. At the time of its completion, the room spanned 180 square feet and contained six tons of amber and other semi-precious jewels. Historians estimate that the room was worth the equivalent of 113 million of today’s British pounds.

The room remained in Russia until 1941, when the Nazis stormed Leningrad (present-day Saint Petersburg) as part of Operation Barbarossa. Head art curator Anatoly Kuchumov was ordered to pack up the Amber Room and send it east for safekeeping. However, Kuchumov realized that the amber panels had become brittle over time, leading him to worry that they would break if packed away. Instead, he ordered for the room to be covered in thin wallpaper, in the hopes that the Nazis would pass it by.

The Nazis found the room within 36 hours. They packed its contents into boxes and brought it to Königsberg, Germany (present-day Kaliningrad), where it sat on display for the next two years.

In 1943, as the Allied forces moved in on Germany, the Nazis ordered for the room to be packed up once more. Königsberg was bombed in 1944, leaving the castle museum destroyed.

It is not clear whether the room was shipped away before the castle was bombed. The only intact pieces of the room ever discovered were a cabinet and a Florentine mosaic that a German soldier had stolen before the bombings happened. The other three Florentine mosaics that had been displayed in the Amber Room were reported to have been found burnt amongst the museum’s rubble.

While many historians believe that the room was destroyed, others theorize that its contents are still out there. Some eyewitnesses reported seeing the contents of the Amber Room being loaded onto Wilhelm Gustloff, a German transport ship, that was sunk by a Soviet submarine. However, no evidence linking to the Amber Room has been found within the wreckage.

Read more: What is Megalophobia?

Others believe that the room is hidden somewhere below the city’s sprawling underground network of tunnels and chambers. In 2017, German treasure hunters began excavations under the Ore Mountains in eastern Germany, after identifying clues that the treasure was hidden in tunnels under a cave. So far, nothing has been found from the excavations.

In 1979, the Russian government began a reconstruction of the Amber Room. After 24 years and $11 million, the reconstruction was completed. The room currently sits on display to the public in the Tsarskoye Selo State Museum Reserve outside of St. Petersburg.

The Call of the Void and its Perilous Lure