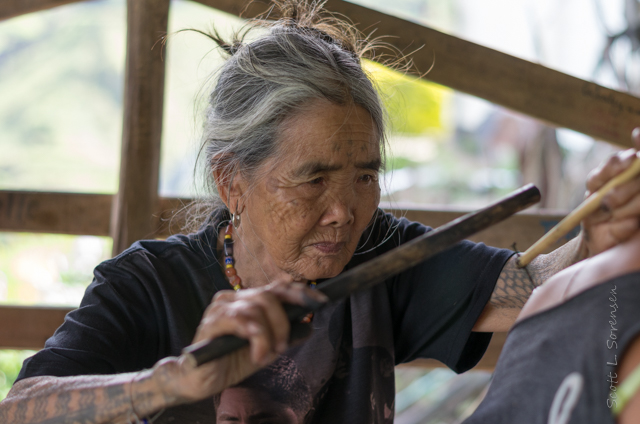 Whang-od Oggay is the oldest surviving Mambabatok, an expert in the ancient art of the Kalinga Filipino tribal tattoo. (Photo: Wikimedia/Mawg64)

At 101, Whang-od Oggay is the oldest and last living Mambabatok. Living in a remote village in the Philippines, she is the last practitioner of Kalinga, a Filipino tribal tattoo practice. She has spent her life tattooing the returning victorious warriors of the tribe. Sadly, she may be the last of her kind, and with her, the art of tribal tattooing will be lost forever.

Devotion to an ancient tradition

Whang-Od began practicing tribal tattooing as a young girl. She felt the pain of love young, losing her boyfriend at the age of 25 during the Japanese occupation. She never remarried and never had children. Instead, she chose to give her life to the art of tattooing. Tattooing for eight decades, she has kept alive the art of Kalinga tattooing in an ever-changing world.

However, having no children posed a problem. The teaching of tribal tattooing can only be passed down through the bloodline. It is believed that teaching anyone outside the bloodline will result in infected tattoos. She is teaching her niece the craft. However, like many of the younger generation, the niece is interested more in studying than in preserving the ancient traditions of her tribe. With the tattooing bringing in more and more tourism, more young girls are being drawn to the craft.

In recent years, Whang-Od has received the fame and recognition she deserves. In 2017, she travelled to Manila to take part in a show presenting the country’s artisans. After photos of Whang-Od were released asleep at the venue, the shows organizers were accused of exploiting her after she tattooed a staggering 300 people over the two-day event. Whang-Od denied this and said she just didn’t want to turn people away by taking time to rest. Whang-Od has also been nominated for the honour of National Living Treasure. Today, the village receives a number of backpackers eager to take a selfie with the famous tattoo artist.

Tribal tattooing has been a part of Kalinga culture for thousands of years. During the Spanish and American occupation of the Philippines, the Kalinga tribe were one of only a few to resist foreign rule partly due to its remote location. This resistance helped preserve the ancient art of the filipino tribal tattoo until today.

Traditionally, tattooing was used to signify success after battle and beauty. The tribes’ warriors often fought with neighboring villages over land and honor. When the victors returned from battle, they would visit the village mambabato, who would then give the warrior a babok (tattoo). Each tattoo represented a person the warrior had killed. With the modernization of the Philippines, this tribal way of life has largely died out. The last warrior tattooed by Whang-Od was in 2002.

The method of tribal tattooing has remained unchanged. It uses citrus thorns to prick the skin with charcoal. Whang-Od begins by taking the thorns from a calamansi or pomelo tree. This thorn is then threaded onto a bamboo reed. She sketches the design on the skin using a piece of straw. The ink is made by mixing charcoal and water. Dipping the thorn into this ink, she then taps the skin using a small bamboo hammer. This type of tattooing is extremely painful and not for the faint-hearted! Complex designs can take many months to complete.

While the art of tribal tattooing is being ignored in the Philippines in favor of technology and progression, there is one place it is being revived. In Los Angeles, California, a group of people are working to keep the tradition alive. They call themselves Tatak Ng Apat Na Alon or “Mark of the Four Waves.” Founded 20 years ago, the group comprises Filipinos and Americans of Filipino descent, who use tribal tattooing to connect with their heritage. In order to prevent the tattoos from being appropriated and becoming a mere trend, only people with Filipino heritage can receive tattoos. Members of the tribe have made pilgrimages to Whang-Od’s village. After seeing their work, she was very impressed.

The art of tribal tattooing has long been a part of the culture of the Kalinga tribe. With Whang-Od in her second century, many were worried that the filipino tribal tattoo would die with her. However, due to a recent interest by tourists and Americans looking to connect with their Filipino heritage, traditional tribal tattooing may be here for many years to come.

Cel Ray Soda: Someone Made Celery Soda in 1868 and It’s Still Popular Today!