Written By Nathan Chilcott
in Want 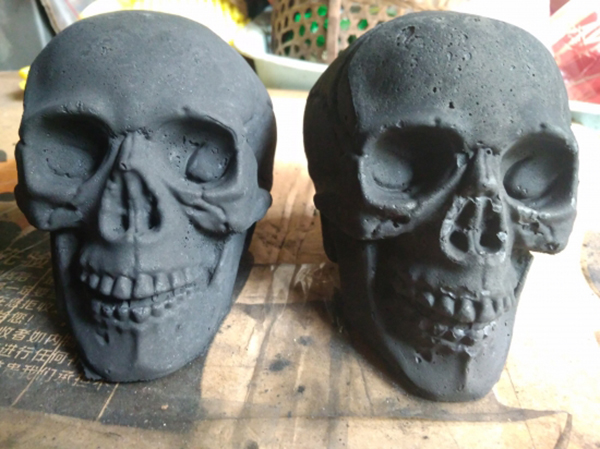 For most people, Halloween is the designated time for macabre findings. But the same isn’t true for everyone. There are plenty of people who celebrate the darker side of life in their daily routines—for example, by using skull charcoal when barbecuing.

Whether you identify as a goth, are into the dark arts, or simply like playing practical jokes, you’ll love the charcoal skulls that Japanese artist Sekisadamu (@gorovodka) has created.

Sekisadamu attends the Wonder Festival in Chiba, Japan, every year. As a recognizable name, he has to create something new and thought-provoking every year. Last year he thought it would be fun and cool to create charcoal in the shape of human skulls.

Every piece is perfectly engineered. Any unsuspecting neighbor glancing across at your friendly barbecue will feel a chill go through their body as they see the skulls staring back at them from the flames. They look even better after they’ve been on the barbecue for a little while.

The idea was certainly well-received. Sekisadamu made 261 skulls for the festival and sold all of them within 40 minutes. He decided to take his idea one step further: he’s currently working on a life-size charcoal human skull!

The full-size version is likely to set you back around 500 JPY ($4.65) which means you may never want to burn it. But that doesn’t mean you can’t have some fun with it at the neighbor’s expense!

How skull charcoal is made

The charcoal skulls are made from crushed charcoal and plant-derived materials. These combine to create a putty which is then molded to form skulls. They are 100% natural and so life-like that you wouldn’t be blamed for thinking someone found a way to shrink human heads and burn them!

Skull charcoal burns better than regular charcoal, and you’ll find it difficult to locate anything else as macabre or awesome!

The popularity of skull charcoal may have surprised Sekisadamu, but it really shouldn’t have. The skulls are realistic and will add flourish to any event.

The future for skull charcoal

With more than 13,000 “likes” and almost 9,000 retweets in a number of hours for his tweet announcing his skull charcoal, it’s no surprise that Sekisadamu has requested a patent for his design.

He’s also created a dedicated website that allows you to see the charcoal skulls and order them in time for your next barbecue. Unfortunately, these charcoal skulls are not currently available outside of Japan, due to production issues, which don’t appear to be resolved soon.

Skull charcoal is processed and shaped using a different method than traditional charcoal. The Japanese artist believes the different process is the reason why manufacturers have, so far, refused to mass produce these skulls for market. The technique and design are possibly too complicated.

Maria Rasputin: The Fascinating Life of the “Mad Monk’s” Daughter