Written By Christine Bradley
in Tech 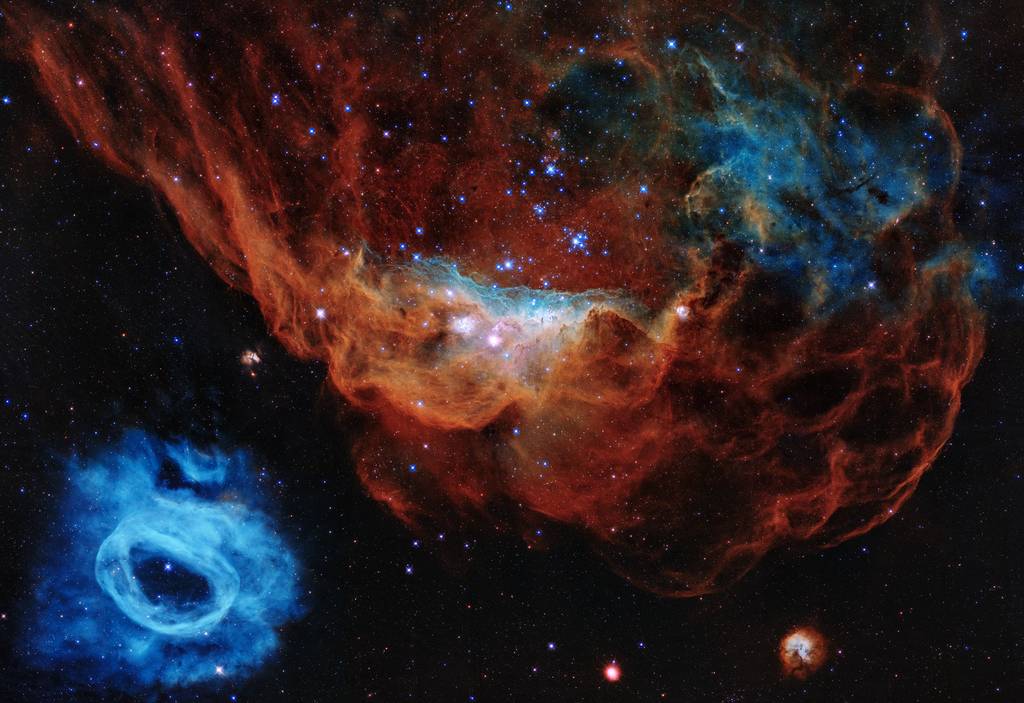 In this Hubble portrait, the giant red nebula (NGC 2014) and its smaller blue neighbor (NGC 2020) are part of a vast star-forming region in the Large Magellanic Cloud, a satellite galaxy of the Milky Way, located 163,000 light-years away. The image is nicknamed the "Cosmic Reef," because it resembles an undersea world. (Photo: Wikimedia/NASA)

Do you think of the human-populated Earth as an advanced technological civilization, almost godlike in our scientific ingenuity and achievements? If so, you’d be very wrong, at least on the Kardashev Scale, where planetary systems at Earth-like levels of development are rated at a big, fat zero. Scientists are wrestling with more fundamental challenges, like tackling space blindness, or determining why moon rusting may be earth’s fault.

Is there anybody out there?

In 1964, Russian astrophysicist Nikolai Semenovich Kardashev proposed a new scale for ranking planetary civilizations based on the amount of energy they could harness from their nearby star system/s. The Kardashev rating was designed to guide searches for signs of intelligent extraterrestrial life.

Tracking down potential alien life elsewhere in the universe is a tricky business, not least because we have only a single planetary data point or model (humanity on Earth) to help us imagine what intelligent beings and civilization look like. There is, however, one commodity that any highly advanced civilization seems likely to need in large quantities – energy.

The big idea behind Nikolai Kardashev’s thinking was that if we could understand how advanced extraterrestrial civilizations sourced their energy, we would be better placed to spot evidence of energy harvesting and energy use in astronomical observations.

Amongst the most useful later suggestions is a formula (commonly attributed to the famous cosmologist and author, Carl Sagan) to quantify the level of civilization on a numeric scale with decimal subdivisions according to the equation:

Where P is the power accessed in watts, and K is the type ranking of that particular civilization.

Applying this equation across the expanded Kardashev Scale gives us a broader set of civilization types from 0 to IV or V, equated to approximate levels of energy access such a civilization would be capable of harnessing.

A type 0 civilization has not yet been able to harness all the energy of their home planet, depending instead on some of its raw materials as energy sources (e.g., fossil fuels). The inhabitants of this civilization are not yet able to leave their home planet permanently or undertake long-distance space travel, although they may be working towards it.

Type I civilization: energy of the order 1016 watts – planetary scale

This civilization can fully control the energy on its planet. It might be capable of harnessing all sunlight falling on the planet via solar panels or solar-power satellites, which transmit energy wirelessly to the planet’s surface. It may also be capable of producing nuclear fusion power on an industrial scale.

Civilizations with type II status control all the energy produced by the star/s in their solar system through some super-advanced (and purely theoretical to our current understanding) engineering technology such as the Dyson sphere, or Dyson swarm, means of capturing the majority of a star’s energy output.

A civilization with Type III status has control over the energy of its solar system and its entire galaxy. This would require the deployment of multiple Dyson spheres around all relevant stars or some other means to harness the energy of Black Holes at the center of galaxies. As well as these vast feats of engineering, a Type III civilization would require advanced interstellar transport.

A civilization with Type IV status can harness the energy of multiple galaxies or even the entire universe.

Moving ever further into the realm of the theoretical and unimaginable, a Type V civilization would be able to harness the energy of not just our local universe but multiple (theoretical) universes across space-time.

Where on earth is earth on the Kardashev Scale?

Human beings might be at the top of Earth’s food chain, masters of nuclear fission energy, and so influential in terms of planetary system impacts that many are calling for the current geological era to be renamed the Anthropocene.

But this may all be rather underwhelming for extraterrestrial aliens who come calling in advanced intergalactic space vehicles any time soon.

Humans rank low on this scale. In 2018, we had an average power consumption of 18.4 Terawatts, which would give Earth’s civilization a Kardashev rating of just 0.73 under the formula above – not even a Type I on the Kardashev Scale!

Well-known theoretical physicist, Michio Kaku, calculated that if Earth’s power consumption rises by 3% every year, we could reach a Type I civilization level in 100–200 years. It would then take a few thousand years to get Type II level and between 100,000 and a million years to reach Type III at the same pace.

It would be easy to view the Kardashev Scale as something aspirational and the direction of travel which humanity should be looking towards for the future. But there are also some significant philosophical and practical considerations to bear in mind around the logic, ethics, and risks of moving up the Kardashev Scale.

Can we be sure that the Kardashev Scale is correct in aligning energy use with patterns of civilization advancement? The answer may be that it’s a good guess and a sensible extrapolation based on what we know of our development on Earth so far, but that’s as far as we can go.

Even if the Kardashev Scale is correct in its internal assumptions, how sure can we be that this technological advancement is a measure of a ‘good’ civilization?

Some philosophical schools would argue that the critical measure of a civilization’s level of advancement should be determined by ethical values and the quality of life enjoyed by its citizens.

A benevolent civilization might harness vast energy through scientific cooperation on clean energy resources over long periods with high government investment to benefit all citizens. Equally, the same amount of vast energy might be harnessed by an unjust civilization. Most citizens are oppressed and subjugated, with energy harvested via environmental destruction and often diverted into elite space projects rather than improving lives and livelihoods.

A third option could be that civilization at Kardashev Level I and above thinks and operates in ways so far beyond our current world that we cannot imagine its ethics at all.

So, does the Kardashev Scale tell us anything about the ethics of the civilizations it covers? Probably not. The Kardashev Scale appears to be more ethically neutral, allowing multiple ways to reach the same goal or simply beyond our current ethical understanding.

Ethical or not, we should also remember that transitions at these magnitudes carry commensurately, and perhaps existentially, large risks.

We have already seen the broader and longer-term impacts on our planet and people from significant social and economic transitions such as the Industrial Revolution. Their consequences are still playing out today. Shifting between Kardashev scale types may present an even greater potential upheaval, moving through dangerous times when a society surpasses the limit of resources available on their planet, solar system, or galaxy, and potentially skirts catastrophe.

Even the first transition from Type 0 to Type I could carry a severe risk of self-destruction. For example, increasing the use of energy on Earth without successfully managing the removal of associated heat leads to climate change, potentially making the planet incompatible with the biology of the planet’s dominant life-forms (i.e., us) and our food sources.

Optimists may choose to believe that as-yet-undiscovered future technologies will be in place to deal with these kinds of risks when they arise. Alternatively, by the time we approach Type I, we will already have settled on other planets or established artificial O’Neill-type colonies, enabling us to distribute waste heat throughout a more extensive system.

But have we found any aliens yet?

Since it was first proposed, the Kardashev scale has sparked the development of hypothetical new energy consumption mechanisms, influenced general thinking around future human energy consumption, and inspired generations of science fiction writers and readers.

It’s also a valuable framework for thinking about technological progress’s scientific and philosophical implications, with all the attendant ethical questions and risks to be addressed.

But returning to the original purpose of the scale, have we uncovered any observational evidence of advanced civilizations yet?

The answer is no. While this could be simply bad luck or lousy understanding on the part of human civilization, it may also indicate that there aren’t many (or potentially any) Kardashev higher type civilizations in our part of the universe.

If they were around, we would expect to find some traces. A type III civilization, for example, should theoretically have a massive impact on their local galaxies, generating detectable signs of their existence through their energy interactions with stars and black holes or their interstellar transport and communications systems.

So far, the best hope seems to lie in KIC 8462852, or Tabby’s Star, a mysteriously dimming and brightening star in the Milky Way, around 1480 light-years away from Earth, in the constellation of Cygnus.

Current astrophysics knowledge does not explain the behavior of KIC 8462852, and numerous theories have been proposed to account for the varying brightness. While these range from dust rings to planet swallowing, or even an artificial megastructure such as a Dyson sphere or swarm, this last suggestion, indicative of a Type II civilization, is considered to be highly unlikely.

We may not have found alien life yet, but while we’re waiting, the Kardashev scale gives plenty of scope for thinking constructively about our development and energy ambitions. With many possible routes for moving from Type 0 to Type I, this could be another helpful way to focus minds on positive routes to global energy shift (e.g., collaborative agreements, fusion research advances)

How do Eels Reproduce and Where on Earth do They Come From?