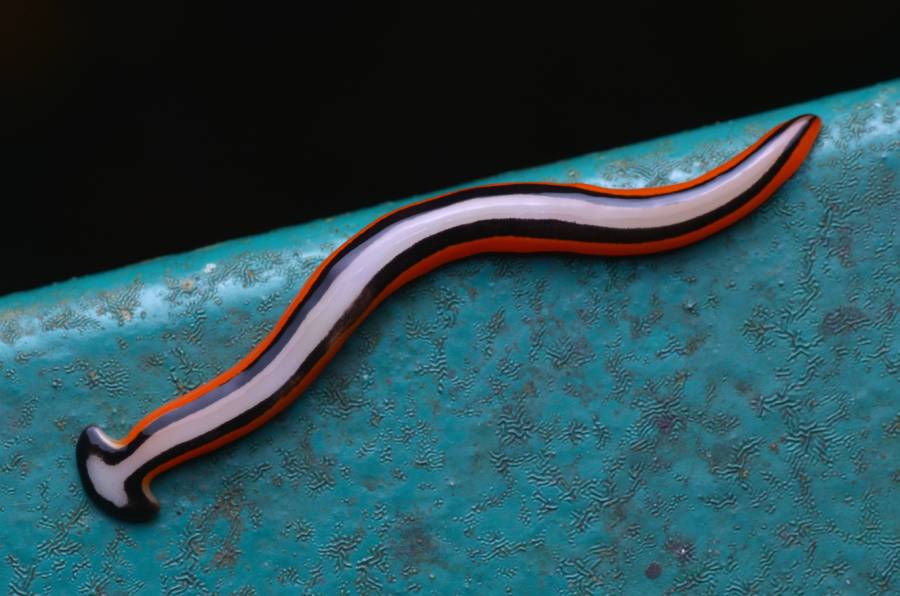 You’ve seen ‘Alien’ where the creature comes out of John Hurt and it is terrifying. That’s nothing compared to what you are about to learn about the hammerhead worm.

What is the hammerhead worm?

The Hammerhead worm has a head that looks like a hammer, AKA, a half-moon-shaped head. The head shape is the same as, oh, the Hammerhead shark. It is also known as an invasive terrestrial planarian bipalium. You may even hear it referred to as “landchovy”, “broadhead planarian”, or even bipalium kewense. It is a type of terrestrial flatworm.

Hammerhead is definitely the easiest to pronounce!

The good news is that the bipalium kewense, (bipalium sp), isn’t harmful to humans. The bad news is that this invading terrestrial flatworm can eradicate native earthworms. It’s considered invasive.

That may not sound serious. Yet, the humble earthworm is an expert at feeding on decaying and dead plant remains, tidying, and fertilizing the soil. In short, you need them in your garden.

The Hammerhead worm comes in a variety of colors depending on where it lives. Terrestrial planarians are generally earth-colored and the small ones grow to be between 5 and 8cm long. Larger hammerheads can measure as much as 20cm!

These worms originated in Southeast Asia. They crossed the oceans with the help of traveling people carrying plants. The worms traveled within the rooted plants and have now circumnavigated the globe.

Of course, because they prefer warmth and humidity, you won’t find them in the desert, mountains, or colder climes, only in temperate regions.

Hammerhead worms are not fussy about their food. They will eat almost any insect, insect larvae, earthworms, and slugs. Hammerheads don’t target humans or pets.

They locate their food using chemoreceptors. These are just under the head and they are surprisingly effective. Once they have identified their prey they move quickly. The worms use their heads to push the prey against an object. Then, they secrete a slimy substance that prevents the prey from moving.

Delightfully, it doesn’t wait for its prey to die before depositing digestive juices onto the hapless victim. It does this via its pharynx which extends much like the creature emerging in ‘Alien’. As the body of the prey dissolves the Hammerhead sucks the liquefied tissue into its mouth opening.

Its mouth opening is also its anus.

This creature is carnivorous but it can survive for several weeks without eating if necessary. During that time it stores food in vacuoles within its own digestive epithelium. In this way, the worm eats part of itself to survive!

The Hammerhead worm is not dangerous to humans but it does contain tetrodotoxin. This is a potent neurotoxin that effectively neutralizes its prey, it can also deter predators. The same neurotoxin is found in rough-skinned newts, pufferfish, and blue-ringed octopus.

The Hammerhead, or bipalium kewense, is the only known terrestrial invertebrate to have this toxin. There don’t appear to be any creatures that prey on the hammerhead.

Hammerheads move like slugs as they glide on a layer of mucus that they produce. They sometimes use this mucus as a rope to lower themselves.

Every bipalium kewense species of worm has testes and ovaries, making them both a girl and a boy. This eliminates the need for standard sexual reproduction.  A Hammerhead rolls across the excretions of another Hammerhead to fertilize the eggs.

The fertilized eggs grow inside the Hammerhead before they’re shed as egg capsules. Rare egg capsule production allows the eggs to hatch after three weeks.

But, the scary fact about the Hammerhead worm is that it is immortal.

This type of terrestrial flatworm can regenerate very fast. If you cut it into pieces each section will heal itself and become a fresh Hammerhead body. Where once there was one you can end up with half a dozen. Even taking its tail off will allow the tail to regenerate and become an adult worm.

Why is it considered an invasive species?

An invasive species is any living organism that has the capacity to overpopulate an environment changing it in a negative way.

This applies to the Hammerhead flatworms as they are virtually immortal and can spread quickly. They have the power to exterminate earthworms, as well as other terrestrial invertebrates. This would have a serious negative impact on the environment as the standard worm is essential for the fertilization and aeration of the soil. Without earthworms, plants and crops would struggle to grow! In fact, the earthworm is often considered the most important creature on earth.

Hammerhead worms have moved across the globe but they prefer warmer climates and humid habitats. That makes them particularly keen on tropical and subtropical regions. They cannot survive freezing temperatures unless buried deep underground.

In this sense, it is similar to the earthworm that it loves to eat.  They constantly secrete mucus to move and therefore need moisture. For this reason, they prefer to live in the soil. The fact that they are sensitive to light also pushes them to live underground.

They come out at night. Afterward, you are likely to see the distinctive slime trail commonly associated with slugs and snails.

Invasive terrestrial planarian bipalium – should you be worried?

These invasive worms are not something you need to worry about, from a pet or personal safety, perspective.

Thanks to their immortality and love of earthworms, if you find these potential herpetofauna predators in your garden, your plants will die and your garden will start to look like a disaster.

Should you kill hammerhead worms?

The short answer is yes.

Research is ongoing, but there is no discernable benefit to having the Hammerhead in your garden. It could be argued that it helps to keep insect populations down. But, considering its main lumbricid prey is earthworm populations, and the damage earthworm depletion could do to our environment, it is a good idea to kill Hammerhead worms when you see them.

They are nocturnal but, if you have them in your yard, you’ll see them moving around in the early morning.

How do you kill a hammerhead worm?

Hammerhead worms are virtually immortal but they are not invulnerable. The secret to killing them is to make sure there are no parts left to regenerate. Simply cutting them in half isn’t an option as you’ll end up with two worms.

The easiest way to do this is to liquefy the animal, although depriving them of high humidity can also slowly kill them. Salt or vinegar is effective! Pour the salt of vinegar directly onto the worm, like sprinkling crumbs to feed a bird, and watch it dissolve. It’s not a nice way to go but this carnivorous worm isn’t particularly nice to others.

You can also put citrus oil in a spray bottle and spray the Hammerhead worms. This is effective at killing them without damaging nursery plants

Another approach is to add boric acid to your soil. This deters Hammerhead worms from visiting your garden, fortunately, it won’t affect the earthworms.

If you have a larger infestation you may want to get professional help. However, soap sprays and neem oil are also effective at eradicating these pests.

Summing up the hammerhead worm

The Hammerhead is distinctive and seeing one will make you want o show others. But, these cannibals are highly toxic to various creatures and can be detrimental to the planet. Look and then kill!