Written By Alastair Crombie
in Culture 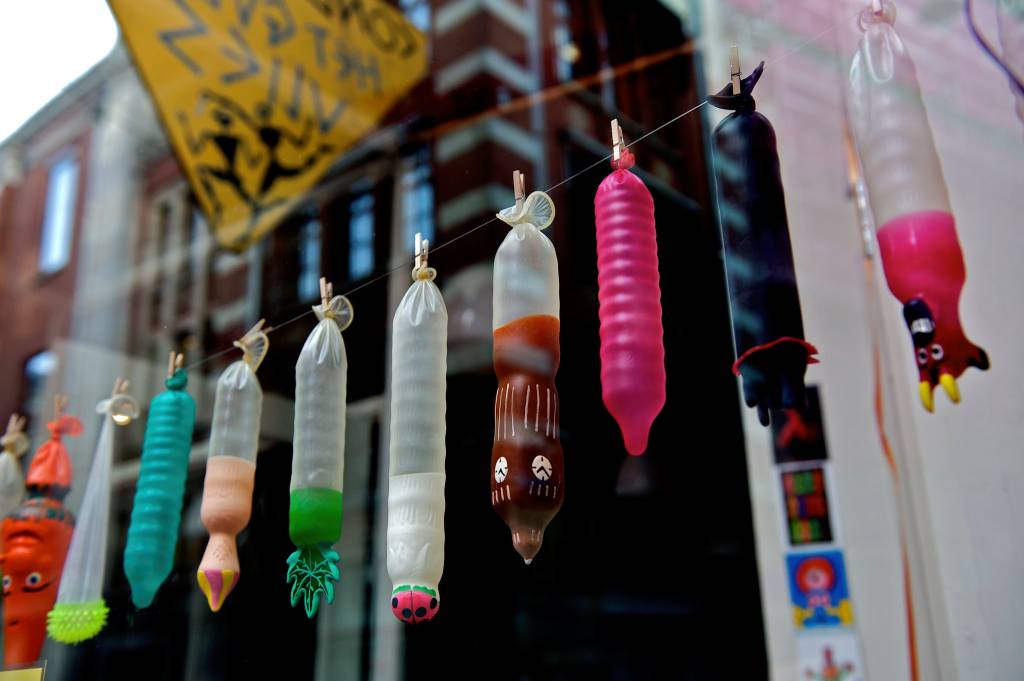 In truth, no one is quite sure when civilization’s engineered the first contraceptive devices. Today, it’s a staple of modern sex life, but the humble condom has a long and chequered past.

The history of the condom is a long one. Reportedly a cave painting in France dating from 11,000 BC depicts a condom-like device. If contraception were a thing back then, it would likely have been fashioned from animal skin or intestines.

The subsequent anecdotal evidence around condoms comes from King Minos of Crete. The unusual King, who lived around 3,000 BC, is known for some interesting mythology. Depending on the story, he is either a righteous hero who developed an early form of constitution and built a large navy or a cruel tyrant who fed young people to a Minotaur.

In some of the myths, they say King Mino’s sperm contained ‘serpents and scorpions.’ Oddly enough, they also mention quite a lot of lovers. Not unsurprisingly, many of the young women he lay with died soon after. The King’s physician made him a goat’s bladder sheath to solve this unhappy turn of events. Thus, capturing the nasty critters before they could do any harm (and bringing a whole new meaning to the term safe sex). Historians disagree on whether the condom was for him or his (un)lucky partner.

The history lesson moves on to the Egyptians. Well known for their forward-thinking, the safety-conscious North Africans used linen sheaths for coitus protection. Although historians believe this was primarily to prevent disease rather than for family planning.

Never a civilization to forgo the proper etiquette, the Egyptians ensured status was upheld by color-coding their genital wrappings based on class. One can only guess if royalty had gold sheathing.

Not content to remove only weapons and armor from the bodies of their slain foes, the Roman victors are said to have fashioned condoms from their dead enemy’s muscle tissue. Safe to say, whichever centurion first told that tale, it wasn’t only the size he was exaggerating.

Sexual protection has also been around in Asia for just as long as in Europe and Africa. Ancient Chinese civilizations were technologically advanced. Their knowledge of silks and silk manufacturing led them to fashion sheaths from oiled silk paper—an example of an early lubricated condom.

The Japanese took a somewhat stiffer approach. They developed a glans (penis tip) covering made from tortoise shell. Historians highlight that this may also have been used as a sexual supplement for those suffering from erectile dysfunction. So, the Japanese contribution can also be considered a sex toy. Perhaps an early indication of Japanese ingenuity?

There is a reason they are known as the Dark Ages. War, famine, and pestilence ravaged the world. In Europe in particular, syphilis raged, and millions suffered.

An Italian doctor, Gabriele Falloppio, performed experiments with a linen sheath. None of the 1100 men who used his protection contracted syphilis. With another early example of glans condoms, the linen was lubricated with saliva and fastened with a ribbon.

Historians point out that butchers dominated the condom industry of the middle ages. Utilizing their knowledge of anatomy, butchers fashioned condoms from various parts including, goat’s bladders, animal intestines, and skin.

One of the stronger arguments for where the word condom came from stems from England and King Charles II. The good King was becoming alarmed at the number of illegitimate children attributed to him (at least eight children and probably more).

The royal physician, Colonel Condom, prescribed a contraceptive sheath made from the intestine of a lamb. History is less clear on its effectiveness.

Other possible origins of the name come from the Latin ‘condus’ meaning receptacle or vessel, or the Persian ‘kemdu’ meaning similar.

No matter the origin of the word, during the 18th and 19th Century the manufacture and use of condoms took off. Brothels started selling them to customers, and their benefits for preventing both disease and unwanted pregnancy became widely known.

Wholesale manufacturing became routine, and as condom usage became more widespread, so to did the condom business. The condom market was influenced by pioneers such as Mrs. Phillips and Mrs. Perkins in the UK. By the 19th Century, linen was on the way out as being less comfortable than the animal-sourced equivalent. With the advent of larger production volumes, the use of condoms spread to the masses and was no longer only for the wealthy.

In 1841, after periods in a debtor’s jail, Charles Goodyear invented vulcanized rubber. By 1844 he’d mastered the process and registered a patent. Goodyear heated sulfur and natural rubber in the rubber vulcanization process to create the durable and highly elastic material we know today.

With the advent of rubber condoms, mass production became possible, and around 1860, the rubber condom was a reusable and cheap birth control device. In the early stages of rubber condoms, they were made to measure and were not as comfortable as the animal equivalents. But they were inexpensive and had beaten out skin condoms by the end of the 19th century.

Latex to the rescue

Early rubber condoms were uncomfortable, the first versions even having a seam running along their length that can’t have been pleasant at all.

Luckily for everyone, along came latex. During the 1920s, scientists discovered that rubber suspended in water created a hugely stretchy, durable material with high tensile strength. Latex condoms were born.

From here on, there was no limit to the variations created. Colors, flavors, styles, lubricants, spermicides, and more, were all options to be developed up to the present day.

During world war II, condoms were issued to soldiers on both sides to prevent venereal diseases, including syphilis and gonorrhea. Germany had led the way by issuing prevention to her soldiers during the first world war and had significantly fewer cases than the allies.

Throughout history, the condom has been a contentious device. There have always been some who considered it sinful or against the laws of nature.

The Catholic church has always had a slightly contradictory approach. Lauding the condom’s ability to prevent and reduce sexually transmitted disease but frowning upon it as a method of birth control.

Prohibition reduced its use, including the Cornstock Laws of 1873 in the US that banned the sending of condoms in the mail and condom advertising.

These days, major condom manufacturers can mass-produce thousands an hour, and it’s a multi-billion-dollar industry. Condom use has gone from being only for the select few to mass-market domination.

Usage, too, has changed. The first sheaths were not about birth control but focused on venereal disease prevention. However, as medical knowledge improved, they became dual purpose.

Sexually transmitted diseases have always had a large part to play in the profligacy of condoms. Be it syphilis, or more recently, the AIDS epidemic. Preventing pregnancy is a relatively new idea.

Bill Gates and his 11 condoms of the future

You might think the development of the condom is over. After all, the little latex wonder (or slightly larger latex wonder if it’s a female condom) is perfect for the job, no?

Not according to the Bill and Melinda Gates Foundation. A few years ago, they had a contest to create the condom of the future. Over 800 entries were received, and they chose eleven winners for further development. So look out, soon you could be seeing graphene condoms, self-tightening condoms, or how about cow tendon condoms?