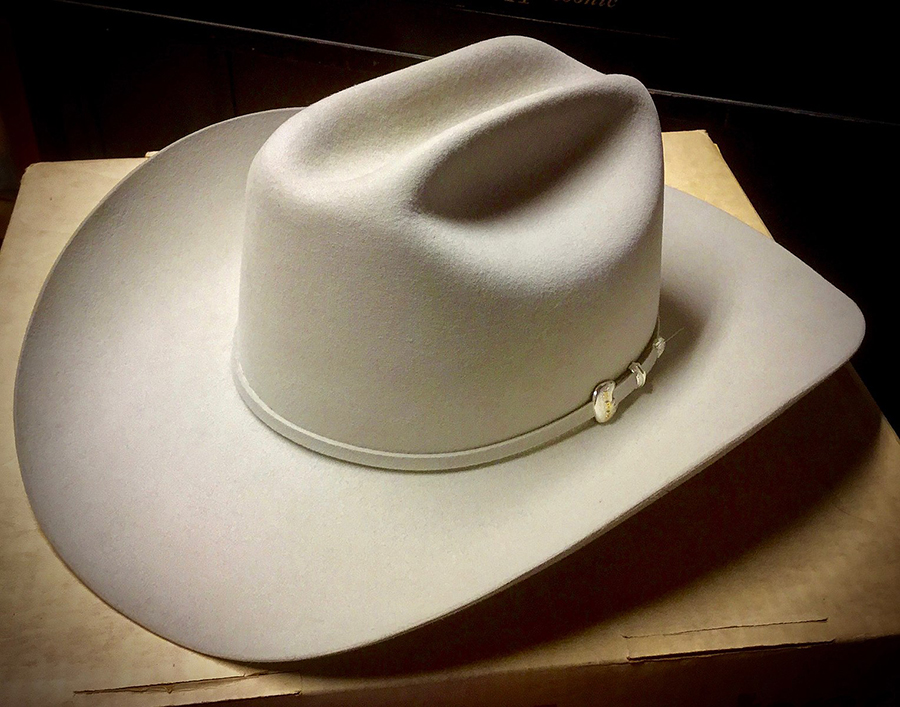 If you had to name a company known for quality hats off the top of your head it would be pretty easy. The first and possibly only one that immediately comes to mind? Stetson. This American classic brand is known for its cowboy hats, otherwise known as the ten gallon hat.

Founded in 1865 in the American West, the John B. Stetson Company certainly aimed to please. The Boss of the Plains hat was one of its initial offerings, providing practical workwear for the style-conscious cowboy. The story behind it is a good one too.

As the story goes, during his travels to the Rockies and the Great Plains after the end of the American Civil War, Stetson realized that his eastern city hat was too small-brimmed for the wild Wild West. He had some beaver pelts and nothing to shape them with but a flat frying iron and a cooking pot.

And now you know how the hat got its wide brim and overall shape.

The 10-gallon hat that Stetson produced had about a four-inch (10 cm) crown and a wide brim that could be curled, if desired, and it became quite popular. Reportedly, people Stetson met along the trails would offer him as much as the price of a Colt pistol for one of his hats, so he knew he was onto something. The hats quickly became widely available starting at “one-grade quality” for $5 all the way up to “full beaver” for $30 (about $471 today!).

Stetson founded the John B. Stetson Company, started selling those hats, and the rest is history!

The crease you now find in cowboy hats would come later, with the Tom Mix hat, named after the silent cowboy film star who made it popular between 1910 and 1930. But the Boss of the Plains was the hat that started it all.

A quick glance at the hat tells you that it certainly doesn’t hold 10 gallons (37.85 L). A famous Stetson advertising poster painted by cowboy-artist Lon Megargee that circulated around 1924 may have helped spur this claim. Titled “The Last Drop from His Stetson,” the painting depicts a cowboy crouched down in front of his trusty horse as it seemingly slurps up water from his ten-gallon hat.

To borrow a little Texas phrasing: though “The Last Drop from His Stetson” is a fine painting, it’s also a lot of hogwash.

Read more: The Origins of the Phrase “Shiver Me Timbers!”

Though you would think that your hat would be ruined if a horse drank water from it, those original Stetsons were as tough as the cowboys who wore them. In fact, when the battleship USS Maine sunk in 1898, then raised 14 years later in 1912, one of the original Stetsons on board was found.

They cleaned off the muck, and even after 14 years of salt water and nibbling fish, the hat was fine.

The problem with the 10-gallons claim isn’t in the hat’s durability, but rather in its capacity. John B. Stetson himself filled up one of his hats and confessed that it would truly hold only a modest 3 quarts; that is, just 0.75 gallons (2.84 L).

So how did the ten gallon hat get its name?

There are two conflicting theories on the origin of the ten-gallon hat name, both situated around the vaqueros, the cowboys of Mexico. One theory is that the name for the ten gallon hat comes from the Spanish word galón, a type of braid that decorated a hat’s crown. Texas cowboys may have understood the word as “gallon” and the name spread.

The other theory is that the names comes from the Spanish tan galán, meaning “very gallant” or “very dashing.”

In reality, most cowboys wore bowler hats, so picture the Wild West with a whole lot more “Clockwork Orange” going for it than you might be comfortable with. Entertainers like Buffalo Bill Cody, Tom Mix, and John Wayne helped to give the ten-gallon hat its modern association as the cowboy hat.

To quote John Wayne: “It was the hat that won the west.”