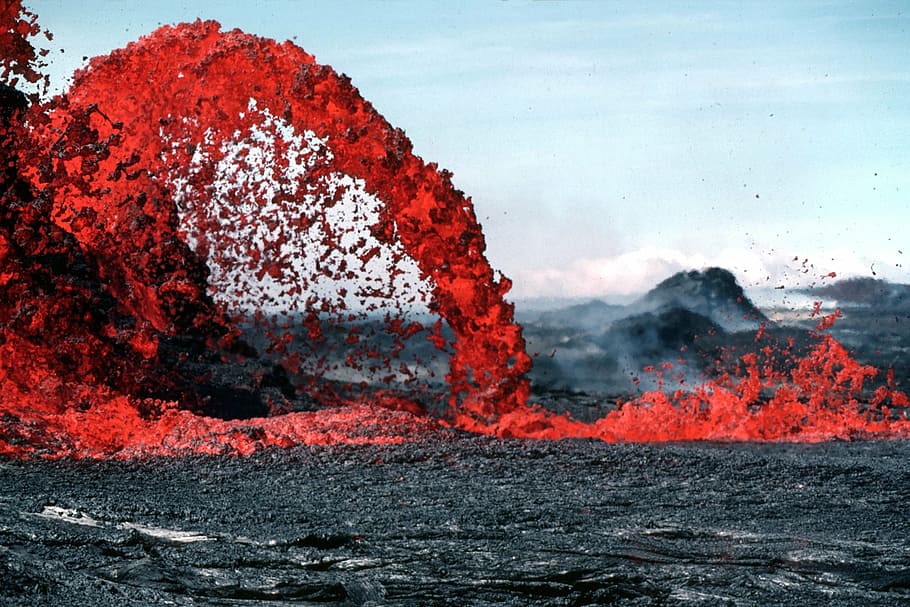 The sound made by the Krakatoa volcanic eruption was so loud it ruptured the eardrums of people dozens of miles away. (Photo: WallpaperFlare/juliette lavoie)

If you’re ever at a dinner party and need to get the conversation flowing, you need to know the facts about the loudest sound ever.

On August 27, 1883, a volcano erupted on Krakatoa, a relatively small island in Indonesia located between Sumatra and Java. It did so with such force that the island was virtually torn in two. The eruption measured 6 on the Volcanic Explosivity Index (VEI), a relative measure of the explosiveness of volcanic eruptions. The VEI scale ranges from 0 to 8. In the last 200 hundred years there have only been two eruptions that measured higher than a VEI rating of 6: Krakatoa in 1883 and Mount Tambora in 1815.

This was the first large-scale eruption in the Sunda Strait since the huge eruption in the 5th or 6th century that presumably created the island. How befitting then that an eruption of a similar scale nearly destroyed it.

The original eruption created Krakatoa and two smaller islands, separated by undersea volcanic craters. The cause is not a mystery, as tectonic plates move all the time. This is simply one place the plates shifted and caused a disastrous—and incredibly loud—eruption.

It started with a cloud of gas and debris being launched into the air above Perboewatan. The debris is believed to have been 15 miles (about 24 km) high. This was lunchtime on August 26. The process was repeated for roughly 21 hours. Mid-morning on August 27 the big bang happened. Ash was sent 50 miles (about 80 km) into the atmosphere.

Approximately 9 square miles (about 23 sq km) of the island disappeared, including two of its three peaks. They ended up 820 feet (250 m) under the water!

The theory behind how this happened is a testimony to the power of nature.

Previous eruptions had always found an exit route through one or all of the three peaks on the island. Since the peaks sat on a huge magma chamber, this release was essential. In essence, the three peaks were the pressure relief valves for the magma.

Unfortunately, the largest peak likely got blocked during a partial eruption. This caused pressure to build up beneath the surface of the earth. When the initial eruption occurred, the magma chamber was split by the force.

The result was seawater hitting hot lava, creating a huge steam engine that blasted the lava out of the top of the volcano. The eruption is estimated to have reached 62 miles per hour (almost 100 kph)!

The speed of sound

Sound travels slower than light, which is why you always see lightning before you hear thunder during a storm. The speed of sound is 761.2 miles per hour (1,225 kph) in ideal weather conditions. It’s also referred to as Mach 1.

This is where it gets technical.

Sound is created by the movement of air molecules. It happens all the time, though some movements are too small to be detected by the human ear although the disruption in the air continues.

The sound wave produced by the erupting volcano went completely around the world. However, after it had traveled 3,000 miles it had become imperceptible to human ears.  But, even at 3,000 miles (4,828 km), it sounded like the distant firing of heavy artillery.

Of course, barometers and other tracking instruments can still measure the impact. In fact, the atmospheric disruption caused by the loudest sound ever was visible on instruments for five days after the event.

So it was loud and it traveled a long way. But there’s more.

If you were at the source of the volcano and weren’t killed by the molten lava or hot ash, the sound at the source would have torn your body apart. It’s the same principle that causes destruction with a bomb, a sound wave literally tears the surrounding molecules apart causing things to move or disintegrate.

The Krakatoa eruption was heard 100 miles (over 160 km) away and it was still 170 decibels. But that’s just a number. A little context will help you to appreciate how loud 170 dB is.

Your average motorcycle is 90 dB; a jackhammer is just 100 dB; thunder can be as loud as 120 dB; and the deck of an aircraft carrier is 140 dB. Short of standing under a Saturn V rocket, you’re going to struggle to find anything as loud as 170 dB. And that’s how loud Krakatoa was 100 miles (160 km) away!

The threshold for pain from a sound wave is considered to be 130 dB; anything above this, you’re likely to sustain permanent hearing damage.

Encountering 170 dB means you would struggle to breathe and your vision would be blurred. Water suspended by the sound wave would create a fog, and you’d have a 50% chance of your body being separated, just like a bomb would.

Surviving this level of sound is possible but is likely to result in damage to hearing and your organs. Don’t forget, we’re talking about people 100 miles (160 km) away from the eruption!

The Loudest Sound Ever killed thousands

Records indicate that 36,000 people lost their lives during the eruption, although it is possible the death toll was much higher. Not all of these were on the island—the sound wave caused deaths in various ways as it traveled.

The sound wave could kill you. It also disrupted the water, creating tsunamis as tall as 100 feet (30.48 m) high. These destroyed at least 65 coastal villages surrounding the islands.

The captain of a British ship, 40 miles (over 64 km) away from Krakatoa, recorded in his log that more than half the sailor’s eardrums were shattered.

For context, note that the force of the atomic bomb that destroyed Hiroshima measured approximately 15 kilotons. This volcanic eruption measured 200 megatons, that’s 13,000 times more powerful! It’s suddenly easy to see why this volcanic eruption could cause so much devastation across half the globe.

Consider this also a timely reminder that nuclear weapons are incredibly dangerous.

Loud sounds are the disruption of air molecules. You can feel the disruption as pressure on your eardrums. It is possible to experience the pressure without hearing the sound, especially if the frequency rate for the sound is low.

That’s impressive. But, even more impressive, is the fact that the frequency was so low that nobody could hear it—just feel it.

Could the loudest sound ever happen again?

Krakatoa was submerged, but in 1927 the underwater reawakened. By 1928, the edge of a new island appeared. Within a year it became a small island, known as Anak Krakatoa, literally the “child of Krakatoa.” It is still growing and currently has an elevation of 1,000 feet (304.8 m). Anak Krakatoa has erupted 45 times since 1883, it may only be a matter of time before it attempts to take the crown of loudest sound ever for itself.