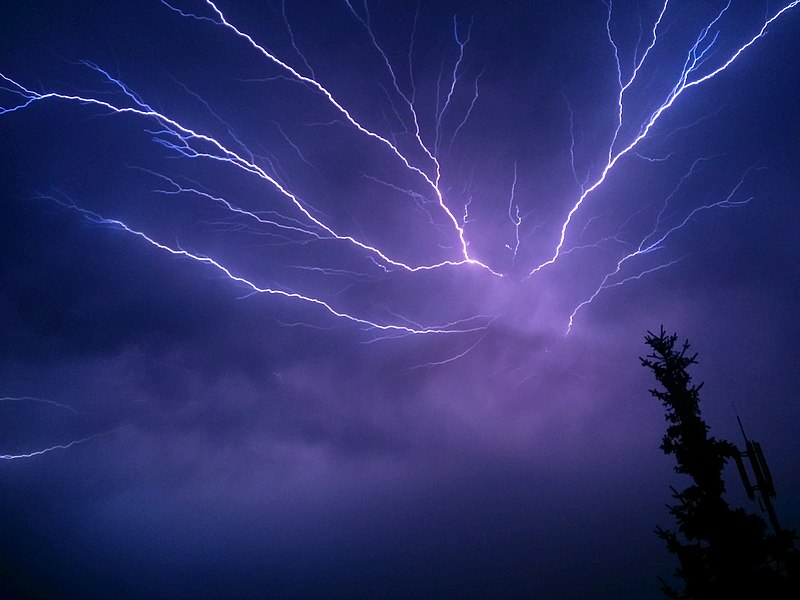 When flying in an airplane nowadays, chances are that getting hit with a huge dose of radiation isn’t something that’s in the forefront of your mind. Just hope you don’t pass through any storm clouds. Dark lightning is a concentrated burst of radioactive antimatter that originates within thunderstorms on Earth, and scientists are just beginning to understand it.

In 2008, NASA launched the Fermi Gamma-ray Space Telescope to study occurrences of concentrated high-energy phenomena across the universe. Typically, these occur in distant black holes and supernovae, which is why it came as a surprise to researchers when the telescope detected such a burst originating from Earth in 2009; namely, from a thunderstorm only 3000 miles away.

Dark lightning is different from normal high-energy radiation; as antimatter is created within clouds, Earth’s magnetic field lines attract the particles, creating a tightly compacted “bolt” that is then thrown into space near the speed of light. Because very little visible light is released, this process is almost completely imperceptible to the human eye; hence the term, ‘dark lightning’.

Scientists studying dark lightning have found that it serves a similar purpose to that of traditional lightning. In thunderclouds, particles rubbing against each other creates an electric field. This state is unstable, so electrons move to try and neutralize the cloud’s electric charge. When this neutralization occurs, lightning is produced, and its path traces that of the moving electrons.

The purpose of dark lightning is also to counter this electric field, but its method differs. According to Joseph Dwyer at the Florida Institute of Technology, the electric fields of clouds under some conditions can create huge plumes of electrons, shot up into space at tremendous speeds. As the electrons come into contact with air molecules, terrestrial gamma rays, or TGFs, are released. This has been known to occur since the mid-1990s, as spacecraft in orbit around Earth have observed these gamma ray bursts coming from storm clouds. But until recently, they were thought to have been produced by ordinary lightning.

As these gamma rays are released and interact with the atmosphere, they produce an electron and its antimatter equivalent, a positron. This effect cascades rapidly, as particles collide with air molecules, gamma rays are released, and more particles are created, like falling dominoes. This is similar to the process of nuclear fission, and Dwyer states that in essence, dark lightning is a “natural, self-generated, self-sustained particle accelerator.” This whole process takes place very rapidly, and within 2 milliseconds can be in reach of spacecraft detection, with such intensity that the sensors on board are temporarily blinded.

The differences between the effects of ordinary and dark lightning can be found in the speed of electrons. In ordinary lightning, electrons move relatively slowly between regions in an attempt to equalize the difference in charge. In dark lightning, gamma rays are able to accelerate electrons close to the speed of light, which produces the intensity of the observed effects. In comparison, dark lightning is much more efficient at its job than ordinary lightning, reducing voltage in and collapsing the electric fields within clouds in as little as tens of microseconds.

So how does this relate to airplane safety?

Dark lightning is formed within storm clouds, which is at roughly the same altitude that planes fly at. Therefore, when flying through a thunderstorm there is a chance of being struck by dark lightning, with varying effects. Depending on altitude, this can be anywhere between absorbing a radiation dose equal to ten X-rays up to that of a full-body CT scan for the top and middle of clouds, respectively. This is roughly equivalent to your radiation exposure allowance for the year.

Thankfully, the high energy phenomenom is very rare (1:1000 ratio of dark to ordinary lightning occurrences) and compared to being hit by normal lightning, the effects of dark lightning are a lot less severe. Pilots also tend to avoid thunderstorms whenever possible, making the chances of you coming into contact with dark lightning highly unlikely.

What is Vegan Leather Anyway?

Where Does Dust Come From, and Does it Have a Sinister Side?