Written By Erin Hamilton
in History 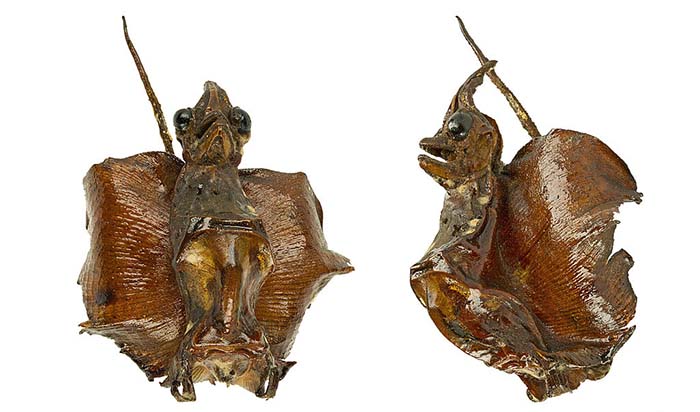 When you think of a mermaid, you think of a beautiful fish maiden with the head and upper body of a woman and a tail of a fish, but the original mermaid was in fact a grotesque creature very much unlike the mermaids of lore.

Known as Jenny Hanivers, the original fake mermaid dates back to the 16th century, when sailors would make these sea creatures and sell them for a bit of extra income. Jenny Hanivers were, in fact, the carcasses of a particular type of fish molded to resemble mermaids. The sailors would catch these flat cartilaginous fish — stingrays, skates, or guitarfish — and dry, carve, and varnish them to sell to tourists presumably as souvenirs.

Sailors preferred rays and skates because these bottom-dwellers can easily be obtained from a boat and, more importantly, they are anthropomorphic; that is, they have human characteristics. You can see how easy it would be to mold the fins to suggest wings and arms, adjust the nostrils to look like eyes, alter the claspers (extensions of the pelvic fins) to become hind legs, and twist the tail into a more ominous shape.

Origins of the Jenny Haniver name

The name is believed to have originated from the Belgian city of Antwerp, where these curios were manufactured and commonly sold. The name Jenny Haniver is thought to be British seafarers’ interpretation of the French phrase jeune d’Anvers (or “young person of Antwerp”). Interestingly, the original name wasn’t gendered. That might explain why in addition to mermaids, these creatures were sculpted to look like devils, demons, or dragons and were sometimes called “devil fish.” Needless to say, they weren’t for the faint of heart.

It wasn’t long before these “devil fish” were exposed as a sham. In 1558, a Swiss naturalist by the name of Conrad Gessner included these creatures in his published encyclopedia of animals, explaining that they were simply taxidermied, disfigured rays. But society’s yearning for the mythical and talismanic meant Jenny Hanivers remained popular till the 19th century.

Oddity collectors believe Jenny Hanivers inspired the legendary Fiji Mermaid, made famous by P.T. Barnum three centuries later. Yet another grotesque forgery, the Fiji Mermaid was simply a monkey torso grafted to the bottom half of a large fish. The allure for the odd and the grotesque, it seems, didn’t wane over the centuries.

Jenny Hanivers are still collected today, and you can find vintage specimens for sale in some parts of the world. Unfortunately, since they are often heavily varnished for preservation, it becomes difficult to date them accurately.

In addition, newer models are increasingly rare as the popular species used to create Jenny Hanivers are threatened. Skates and rays grow slowly, live long, and have few young. Some species are either endangered or blacklisted by prominent environmental groups because of overfishing or other irresponsible fishing or farming practices.

And though these seaside curiosities have long been revealed as a hoax, every once in a while their images make the rounds online and fool us once again, reason yielding to the power of myth and legend.