What is The Black Swallower Fish and Should You be Scared? 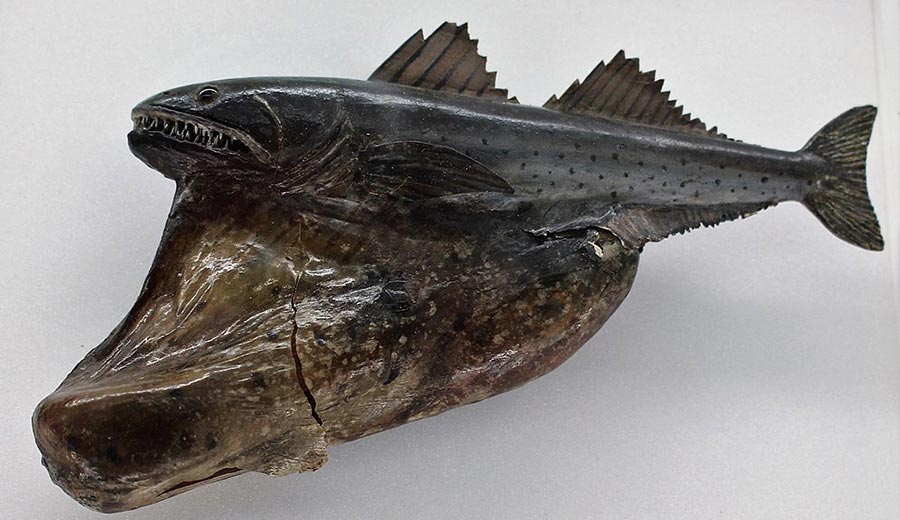 Many things in the sea potentially strike fear in your heart, sharks, giant octopuses, even the pufferfish can look pretty nasty. You may not have heard of the Black Swallower Fish before, but you certainly won’t forget this deep sea fish in a hurry!

The black swallower or Chiasmodon niger is considered part of the Chiasmodontidae family, also called swallowers or snaketooth fishes. This deep ocean fish lives approximately 2.7km below the ocean surface, in the mesopelagic and bathypelagic zones. The good news is that you’re unlikely to run into Chiasmodon niger while out for a swim. This small fish is only 25cm long with an abundance of sharp teeth. Once it’s got a grip on something, it won’t let go! Unsurprisingly, the Black Swallower is an excellent swallower. The hooked front teeth of the black swallower don’t just grip; they can push inward, allowing the Swallower fish to swallow its prey literally! However, this snake tooth fish is picky and prefers to dine on bony fish.

The genuinely terrifying fact is this fish can swallow fish ten times its size and twice its length! The mouth is surprisingly large, allowing it to swallow prey fish whole. It also benefits from a gut that stretches to accommodate the size of the meal. The skin will become transparent, and it’s possible to see the meal inside their stomach.

The black swallower is ideally suited for life in the deep ocean. Meals are hard to come by, which is why it has to make the most of any opportunity.

Although called a fish, it is more like a snake, it has no scales, a long head with a jaw that stretches forever, and it’s a distinctive black/brown color. The snout is blunt, and the eyes are a standard size, although perhaps not a huge benefit where it chooses to live.

The fact that these snake tooth fishes live 2.7km under the sea means you are generally not going to see them at the surface of the water. That’s good as they may try to get your arm or leg inside their stomach! Of course, you’ll have to ask whether a fish can still be alive in the stomach and look out through their translucent skin?

However, if the Black Swallower fish is too greedy, the prey fish will decompose inside their stomach before they’ve finished digesting it. In this instance, the gasses released by the target will overinflate the black swallower and cause the gut to burst, like a mini-underwater explosion.

The Black Swallower fish then floats to the surface of the water. It’s dead and provides the opportunity for scientists to discover what this fish has been eating.

The Black Swallower is Real!

You may mistake the fish for the Loch Ness monster, but it is a real fish and terrifying to any other sea creature at that depth. The black swallower attacks stealthily from behind, cleverly swallows the tail of its prey first, reducing their ability to escape.

It can then take its time sliding the prey down its throat and into its stomach, confident that it won’t need to eat again for some time. Of course, if its eyes are too big for its belly, then it could end up dead on the surface of the water.

It certainly gives you something to think about next time you’re considering that extra slice of pizza.

The Doubtful History of “Liar, Liar, Pants on Fire”