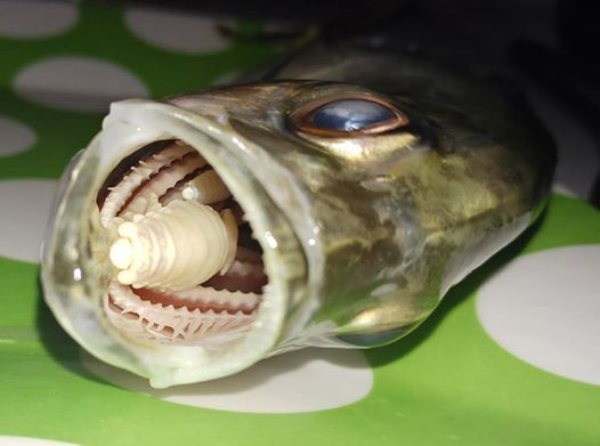 The tongue eating louse is a parasite that enters fish through the gills. It then attaches to the tongue and, as the name suggests, takes over the appendage, which drops off completely. (Photo: Wikimedia Commons/Elkin Fricke)

Isopods are your standard louse-like creatures, found scuttling around the workshop or in the back of a cupboard. Marine isopods, however, are a nightmarish crustacean that harbour parasitic tendencies. One example of such isopoda is the tongue eating louse, or Cymothoa exigua.

Like other parasitic marine isopods, this louse attaches to the gills of certain species of fish. It does not stop there, however: the parasitic process involves a sex change and the loss of an organ.

This species begins its life as a male and immediately seeks a host fish to attach itself to. Spending its masculine years as a gill parasite, the tongue eating louse then makes its way inside the fish’s mouth, where, as the name suggests, it attaches itself to the tongue, commandeers the blood vessels and grows strong as the organ atrophies over time.

Upon entering the fish’s body, the male tongue eating louse undergoes a sex change. It then settles into permanent residence and undergoes significant bodily changes. Adapting to a safe existence, the isopoda’s eyes grow smaller as they no longer need to be on the lookout for hosts or predators, the body expands significantly, and the legs stretch out and anchor it more securely.

The cycle continues and many more fish fall victim as hosts to these parasitic pests, but despite their unsightliness and the initial tongue expropriation, the tongue eating louse does not appear to cause any additional harm, fulfilling its role as a pseudo-tongue effectively for the remainder of the host fish’s life.

Wilkins Coffee Commercials and the Muppets You Never Knew