Crown Shyness: Even Trees Need Their Own Space

Written By Mike Baker
in Nature 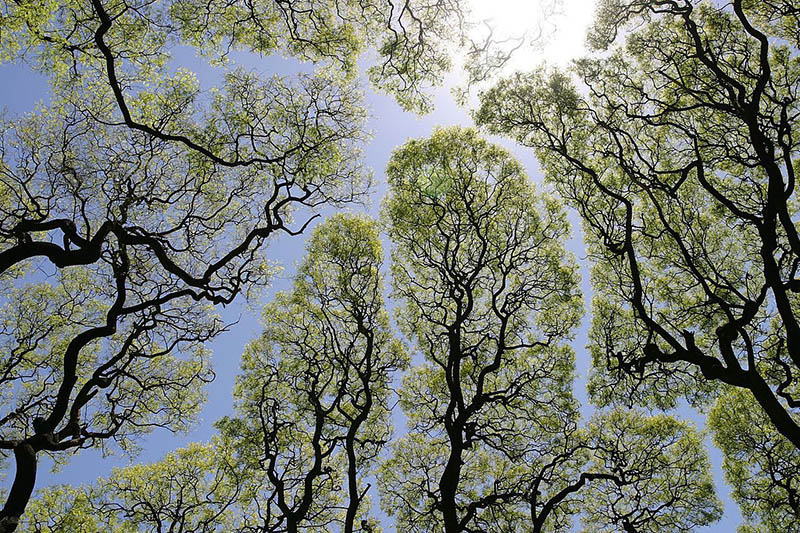 The unusual phenomenon of crown shyness has scientists stumped. Regardless, the wonderful patterns it creates can be breathtaking. (Photo: Wikimedia/Dag Peak)

Have you ever felt like you simply need a break from everyone? Let’s be real, we all do at some point (though perhaps not these days). Turns out we’re not the only species in need of personal space: some trees prefer to be alone too. In a phenomenon known as “crown shyness,” trees avoid touching another tree’s crowns, resulting in rupture-like patterns in the canopy that seem almost too perfect to be natural. Though the phenomenon commonly occurs among trees of the same species, it can occur also among trees of different species.

Read more: Snakes Have Friends and Can Be Choosy about Whom They Hangout with

Although they have been discussing it in scientific literature since the 1920s, scientists still don’t fully grasp the reason for “crown shyness”—which is also referred to as “canopy disengagement” or “intercrown spacing.” The variety of theories could suggest that different species have different mechanisms.

Some theories suggest that the cracks between the crowns could be caused by breakage of twigs and branches from violent collisions that happen during heavy weather. Experiments have shown that if trees are artificially prevented from colliding in the wind, their branches will gradually fill the empty space. Research has also shown that the trees don’t become “shy” until they grow large enough and start colliding with crowns from other trees.

Some scientists, on the other hand, suggest that trees avoid touching their neighbors to prevent leaf-eating insect larvae from spreading, while others believe that the growing tips are sensitive to light levels, which is why they stop growing when they get close to adjacent foliage.

In other words, we can’t be sure what exactly causes this phenomenon, but one thing is for sure—it’s a pretty amazing sight.

Luckily, you don’t have to travel to faraway places to witness this beautiful occurrence. The phenomenon has been spotted worldwide among several different tree species, such as the Dryobalanops, Pinus contorta, black mangrove, eucalyptus, Sitka spruce, and many more.