Written By Jo-Anne Bartley
in History 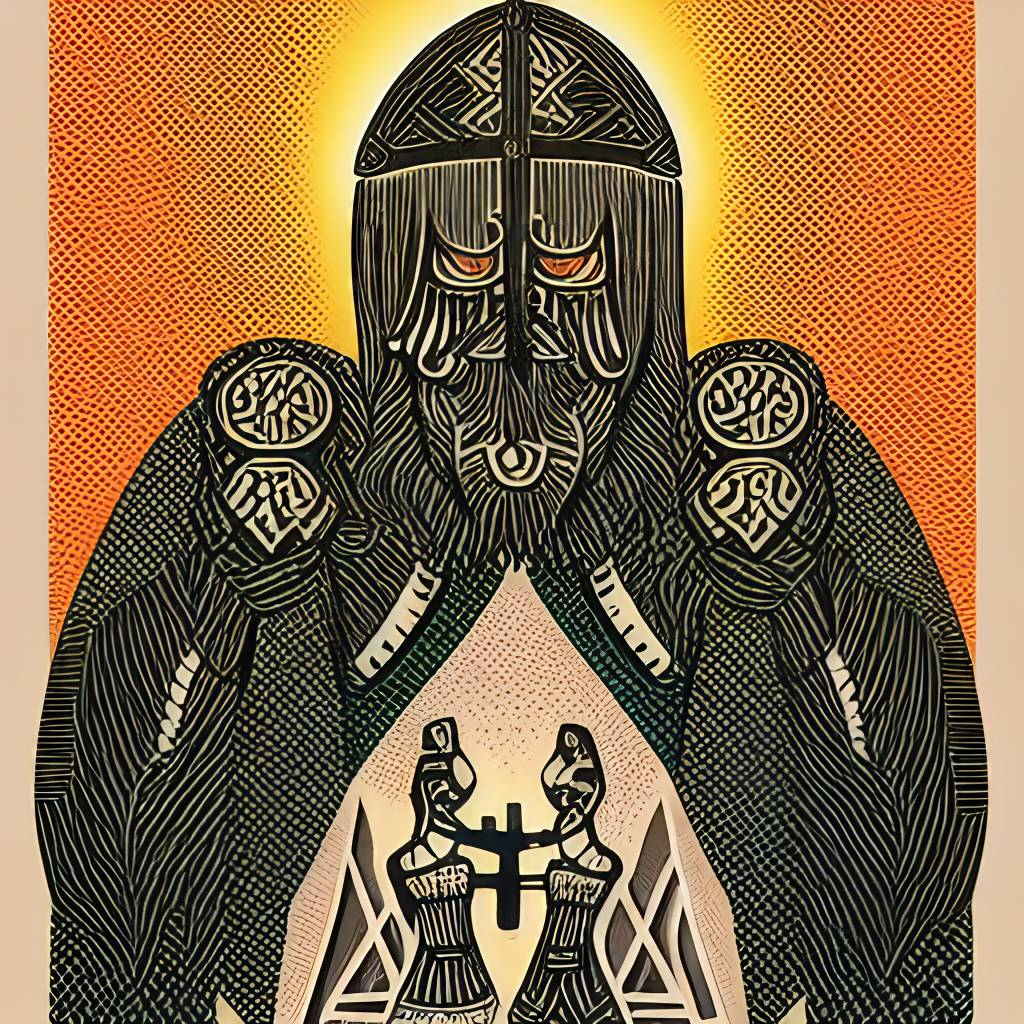 Abstract painting of a Viking wedding.

A Viking wedding was an elaborate and meticulously planned event, from the opening of financial negotiations to the ending bestowment of the morning-gift from the groom to his bride on the day following the Viking wedding ceremony.

Opening negotiations for a Viking wedding

The father of the girl had most likely taken his daughter with him to various fairs and markets, not only to cook for him but to make her availability for marriage known. Alliances between families were usually the motivating factor in a Viking marriage and seldom love. Love was expected to come later with a couple’s growing familiarity with one another. Even though, for the times, Viking women enjoyed relatively high degrees of social freedom—and could even ask for a divorce if not treated properly!—they had to accept their father’s choice for a husband; there was no room for objections.

Negotiations began with the potential groom and a delegation of influential men, arriving at the house of his chosen bride where three fees were agreed upon: the mundr or bride-price paid to the bride’s father for the transfer of her protection to the groom, the heiman fylgia or dowry, paid to the groom as the girl’s portion of her inheritance, and the morgedn-gifu or morning-gift paid to the bride by the groom on the day following the marriage.

Setting the date for a Viking wedding

As Frigga was the Norse goddess of marriage, custom made Friday (Frigga’s-Day) the most auspicious day to hold a Viking wedding ceremony. Other considerations were the weather, attaining the supplies needed to feed and lodge the many guests, and the time required for the preparation of the essential honey mead.

It was legally required that the bride and groom drink bridal ale at the wedding and throughout the month following, which meant that honey must be available to brew the mead for the “honey-moon.” As festivities usually lasted a week, it was important to fix the date after the harvest and before the snows began, as travel in winter was near impossible.

Due to the numerous factors that had to be considered before a date was set for a Viking wedding, there was usually a long waiting period between the initial financial negotiations amid the Viking families and the wedding day itself. In her book Women in Old Norse Society, Danish historian of medieval women Jenny Jochens remarks that even though the date of a Viking wedding—as laid down in the engagement contract—was normally fixed within a year, “a waiting period of three years was not unusual.”

During this interval, it was not uncommon for the groom to change his mind or, worse, die in a battle, thereby freeing the betrothed girl from her obligation to marry. Some scholars believe that therein lies the origin of the so-called “trial wedding” ritual, a popular practice in Neopaganism, in which a couple makes a temporary marriage commitment (usually lasting “a year and a day”) that can be afterward either broken off or renewed.

Before the wedding day, the bride was expected to spend time with her mother and other married female relatives. Her kransen, a circlet worn by girls over their unbound hair, would be removed to be held in trust for her future daughter. Following Viking wedding traditions, the kransen would be replaced with a bridal crown to be worn only during the marriage and the festivities. This crown was a family heirloom made of silver or elaborately woven wheat or straw. She would bathe and then be dressed in new clothing while receiving instruction on wifely and motherly duties from her attendants.

Much like his bride, the groom also underwent specific rituals—in the presence of his father, married brothers, and several of his married male friends. Archaeological evidence suggests that the groom participated in a symbolic sword ceremony which entailed his breaking into a grave to retrieve the family sword of an ancestor; this symbolized his entering death as a boy and emerging into life as a man. Just like his bride-to-be, he’d then take a bath and dress, and receive instructions on his new husbandly and fatherly duties.

The beginning of a Viking wedding ceremony

Even though Christian censorship has made it quite difficult for modern researchers to reconstruct the entirety of a Viking wedding ceremony, it’s very likely that most Viking weddings began with an animal sacrifice. Most often, Vikings would sacrifice a goat in honor of Thor, a sow in honor of Freyja, and a boar or a horse in honor of Freyr; unsurprisingly, all of these gods, in Norse mythology, were associated with fertility, rejuvenation, and prosperity. Once the animal was killed, his blood was collected in a bowl and then sprinkled over the couple with a bundle of fir twigs, in an act of symbolic bestowal of the blessings of the gods.

Next, it was finally time for the exchange of the dowry—the mundr and the heiman fylgia—followed by the exchanging of vows, in the form of specific marriage gifts. Viking wedding vows consisted of the groom presenting his newly retrieved ancestral sword to his bride; she was to hold it in trust for their future son. The bride then offered the groom a sword of her ancestors, symbolizing the transfer of her father’s protection to her new husband. The couple then exchanged wedding rings, which they offered to one another on the hilts of their new swords as a way to further seal their wedding vows. Despite a widespread belief that a Viking wedding wasn’t complete without a handfasting ceremony, there’s almost no evidence that this ritual was ever practiced among non-Christians—and certainly not in the form as it is practiced today.

Following the official part of the ceremony, feasting and merriment followed, lasting throughout the remainder of the week. Traditionally, the feast was organized at a different place, and the two families were expected to race each other to the new site. Perhaps one of the most famous Viking wedding traditions, this ritual was known around Scandinavia as either bruð-hlaup or brúðgumareið, that is to say, “bride-running” or “the bridegroom’s ride.” In accordance with the rules of the ritualized race, the losing party was later tasked with serving beer and honey mead to the winning family.

However, since this was more a symbolic custom than an actual race, it seems that it was prearranged for the groom’s family to come out on top. We know this because, in Christian times, not only was the race replaced with a simple walk, but it was also ceremonially followed by the ritualized blocking of the door. Having arrived first at the location of the feast, the groom was expected to use his sword to prevent her from entering inside without his help. Feigning helplessness, the bride was then supposed to ask her new husband for assistance, whereupon he’d lift her and try to cross the threshold without tripping. The act completed her symbolic transition from maidenhood to marriage, assisted by her husband.

Inside the feast hall

Inside the feast hall, the bride and groom were seated together, naturally at the head of the table. To legalize their marriage and make their union binding, they kicked things off by drinking some bridal ale. The first serving was presented by the bride to her husband in a guksi-like drinking cup which was known to Scandinavians as “the loving cup.” Before taking the first sip, the groom would toast Odin. Afterward, he would give the cup to his newlywed wife, who would make a toast to Freyja before getting a sip.

To ensure the bride’s fertility, the groom would then place a reproduction of Thor’s hammer, the Mjolnir, in her lap, as some of the guests would invoke the blessings of the goddess of marriage: “Bring the Hammer to bless the bride: on the maiden’s lap lay the Mjolnir; in Frigga’s name then consecrate our wedlock!” After this ceremony, the feast was set to begin. Most Viking weddings are known to have included massive feasts. Dancing, wrestling, and good-natured insult-contests provided entertainment for the guests.

One of the strangest Viking wedding ceremonies was the concluding wedding-night ritual. So as to ensure the validity of the marriage, at least six witnesses were selected—three from each family and sex—to escort the bride and groom, by torchlight, to their bridal bed, where they consummated their marriage. It is possible that in early pagan days, the witnesses were supposed to remain for the night to attest to the ritual defloration. However, this theory has never been confirmed due to lack of evidence: strangely enough, as direct the Vikings were about so many things, they seem to have been quite shy talking about sex.

The following morning, the newly married couple were once again parted. Her attendants assisted the bride in dressing, and her hair was braided or bound up in the fashion reserved for married women. She could now wear the hustrulinet, a snow-white, finely-pleated linen head-covering, as a badge of her new status as a wife. She was then escorted into the hall where, as the final legal requirement of the union, the husband paid his new wife the morning-gift before witnesses. The marriage was now complete, and to show her new authority as mistress of the household, he delivered into her keeping the keys to the locks of his house.