Written By Rae Osborn
in Nature 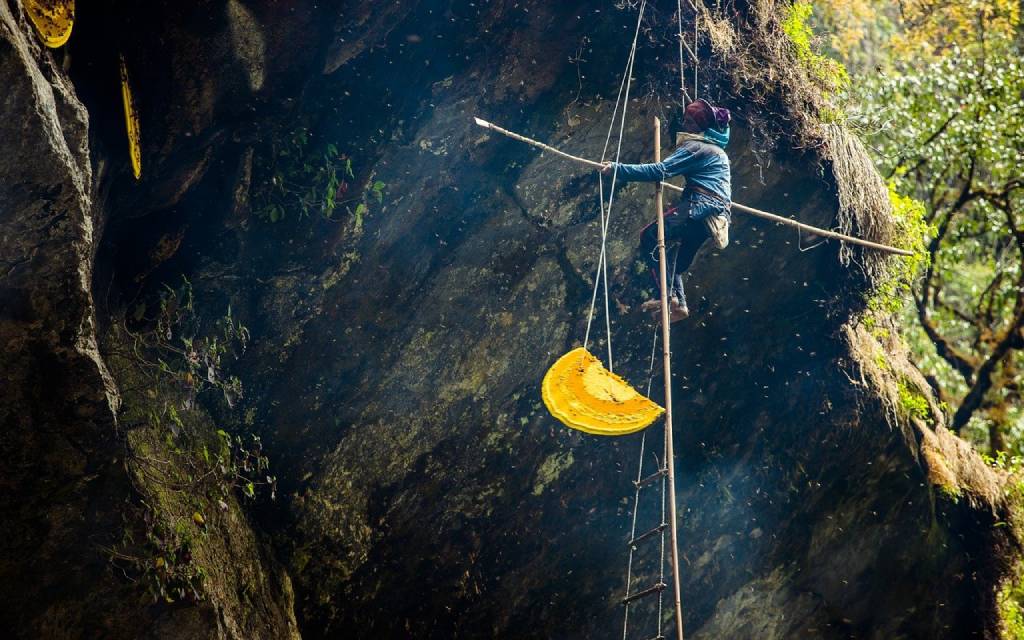 This hallucinogenic honey contains the substance grayanotoxin, which affects how our nerve cells work. While mad honey has been used in traditional medicine, there have been occasional cases of poisoning.

Mad honey is not easy to find compared with regular honey; it originates from only a few plants of the genus rhododendron.

How is mad honey produced?

Local honey comes from bees collecting nectar from vegetation grown locally. The type of honey made depends on the species of plants the bees visit.

Honey is generally considered a healthy foodstuff. Some bitter types of honey, have high antioxidant activity, keeping our cells strong and protecting us from disease.

Mad honey comes from bees that collect nectar from specific rhododendron flowers containing a substance called grayanotoxin. The toxin exists in the flowers and leaves of these rhododendrons and grows in mountainous areas of Nepal and Turkey.

Where is mad honey consumed?

Mad honey is extremely popular in Turkey, particularly common around the Black Sea region. This honey is also famous in the Lamjung mountains of Nepal, where particular rhododendron flowers grow.

In Nepal, Gurung honey hunters climb precarious cliffs to access the hives that contain the honey. Also referred to as red honey, it is a valuable export for the Nepalese Gurung people, selling for many times the price of normal honey.

In Nepal and the Black Sea region, one finds the most rhododendron species containing the compounds that bees use to make this type of honey. Rhododendron luteum is one such example. This plant grows at an elevation above sea level in the mountains of Turkey.

The honey made from rhododendrons is most potent in springtime when the plants produce the most toxin.

Mad honey is also called deli bal in Turkey. It does have psychoactive effects and is considered hallucinogenic honey. At low concentrations, the honey can make a person feel euphoric and also a bit lightheaded.

There are both pros and cons to using deli bal, and while some people find it to be a positive experience, others are poisoned. This is because this specific honey affects the sodium ion channels of nerve cells in the brain. It is the action of the toxin at the molecular level that impacts the nervous system and other organs of the body.

What are the benefits of mad honey?

There are medicinal benefits to mad honey if taken in low doses. The substance has been used as folk medicine to treat a range of ailments.

People have consumed the honey to treat conditions such as diabetes mellitus and high blood pressure. Researchers have reported cases of mad honey helping to decrease the pain associated with diabetes.

Some patients have also used mad honey to treat asthma or coughs. It has been touted as a digestive aid and used for stomach ulcers, heartburn, and gastric irritation. Others have also taken the honey to help improve sexual performance.

While there are some health benefits to taking mad honey, there have been therapeutic misadventures where people have overdosed on the substance.

Why mad honey leads to intoxication

The grayanotoxin in the mad honey is a neurotoxin that has intoxicating effects. Neurotoxic compounds are those which harm the nerve cells of the body. In other words, they cause changes in how our nerves work.

Specifically, deli bal can be harmful at high doses due to its effect on the sodium channel found on the nerve cell membrane.

The strength of the honey depends on the grayanotoxin concentration and can be harmful in large doses—for example, more than one teaspoon.

How does mad honey influence your nerves?

To understand how this honey works, you need some idea of how nerves transmit signals through the body. The fundamental way your nerves work involves proteins and the movement of ions. The proteins on your nerve cell membranes open and close to allow ions to move in and out of your cells.

These ions are calcium, sodium, and potassium. The proteins act as gates (ion channels) that open and close. This has to be done in a specific way so a nerve impulse can move down your nerves.

Grayanotoxin and the nerve impulse

The start of the impulse is the calcium influx; then, sodium ions start to move into the cell. The next step is that potassium ions move out of the cell. This all occurs across the membrane of the nerve cell. How easily substances move across the cell membrane is called membrane permeability.

Grayanotoxin attaches to the voltage-gated sodium channels while they are in the open state. This causes a lot of sodium ions to rush into the nerve cell. Thus, the permeability of the cell membrane is influenced by the toxin of the honey.

What is mad honey poisoning?

You can have too much of a good thing. Every year, there are cases of people suffering from mad honey poisoning, also sometimes known as mad honey disease. Poisoning victims are also often middle-aged men who commonly use mad honey to improve sexual performance.

There are even historical records of soldiers who showed signs of poisoning after eating the honey. Roman soldiers were poisoned in Asia minor when King Mithridates of Pontus used it as an ancient biological weapon. The Persian army intentionally left pots of mad honey for the Roman soldiers to find. The Romans ate the honey, fell ill, and reportedly one thousand died when the Persians later attacked.

Since the substance affects the sodium ion channels on nerve cells, it can be dangerous, although rarely fatal. If one consumes too much mad honey, then too many ions move through each sodium channel.

The freely flowing sodium ions cause a problem since the nerve cell cannot function properly. The poison also causes too much calcium influx, which additionally disrupts the nerves.

Symptoms of grayanotoxin poisoning can begin above 15 to 30 grams of honey. Eating as little as a teaspoon (4.2 grams) has been known to cause poisoning. A person may show signs they are poisoned in the same hour after they first eat the honey.

In extreme cases, victims can fall into a coma. Even higher doses of mad honey are dangerous since this can impact how the heart contracts.

How mad honey affects the heart

The heart is susceptible to neurotoxins. The reason is that our heart rhythm depends on a specific pathway of nerve impulses.

Muscles only contract because of the action of nerves. The heart is no exception, and disruption of the process occurs because of grayanotoxin in mad honey.

These are the two compounds that cause most of the symptoms of toxicity. Of the two, it is the grayanotoxin III that affects the heart the most.

Grayanotoxin III and the heart

Branch block is when the transmission of nerve impulses through the heart muscle is blocked. It is only at specific bundles of nerves where this happens. This causes rhythm disorders, such as nodal rhythm, making the heart pump inefficiently.

A bundle branch block can be seen on an ECG as a transient ST-segment elevation. An ECG is an electrocardiogram. It is a graph showing your heartbeat, which measures how electrical impulses move through sections of the heart.

An ECG shows how much electricity is passing through the muscles of the heart at a given time. The ST is one part of the heartbeat and is the time interval between when your lower heart chambers relax and contract.

Should you use mad honey?

Many may be tempted to try mad honey from Nepal or the Black Sea area of Turkey, but there is reason to be cautious.

Death from the grayanotoxin in the honey only happens in rare cases. However, one should be aware of the harmful effects when overeating.

It is illegal in some parts of the world, for example, South Korea. Where it is legal to buy mad honey, it is noticeably more expensive than regular honey; due to the difficulty in finding and harvesting the mad honey.

You can make up your own mind about mad honey. How much it takes to cause poisoning will vary from individual to individual. However, it is essential to remember that you can become ‘honey mad’ by eating too much.