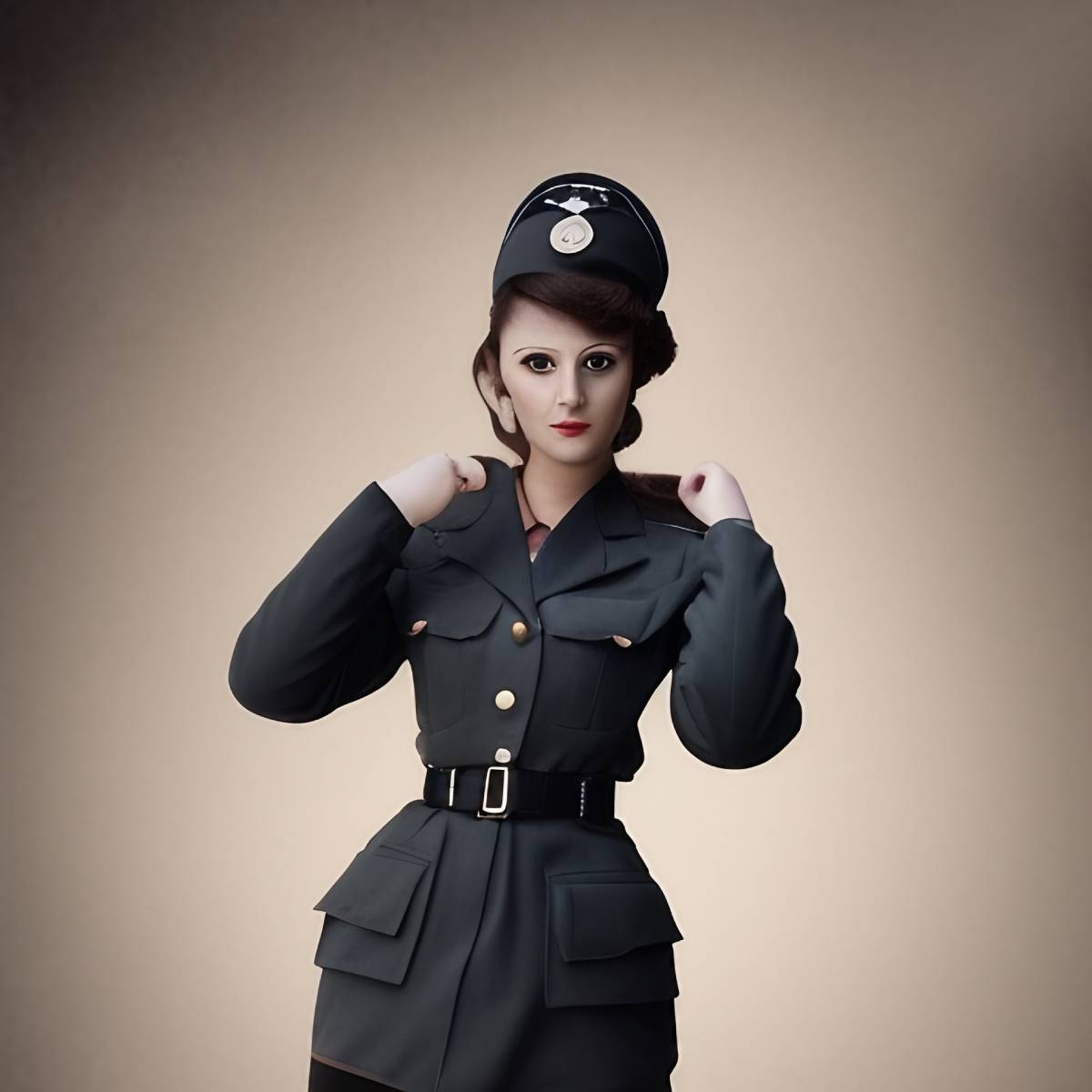 Hopefully, it’s not too deflating but (contrary to internet and media rumors) Adolf Hitler did not invent the blow-up sex doll. In fact, he likely played no part in its history at all, not even in its popularization.

However, that needn’t mean he won’t play a big part in our article. Call it a necessity by way of delusion, call it a variant of Godwin’s law, but any article on blow-up dolls, be it serious or satirical, will invariably bring up Adolf Hitler. We promise.

Also sailors. And Barbie too.

What are inflatable sex dolls?

The answer to this should be pretty self-explanatory, but while we’re here, let’s cover all bases.

Nowadays, you’re likely to see them being thrown around during a stag or hen night—as well as in 9 out of 10 coming-of-age sex comedies! But make no mistake: there is a growing market for sex dolls, and some of it includes hyper-advanced robotic dolls that are terrifyingly life-like!

Even though using a lifeless object for the gratification of one’s most intimate desires is a relatively new practice, the idea of sex dolls has been around for millennia.

After all, as Anthony Ferguson remarks in his enlightening book The Sex Doll: A History, the reason why blow-up dolls are a new invention is only that the technology for making them was not available until recently. Rubber, for example, was invented only as late as 1745, 94 years before inflatable objects came around, and almost two centuries before latex rubber cushioning became possible.

But that doesn’t mean that certain fetishes and desires, that involved the use of a life-like object, weren’t around even in ancient times. In fact, Ferguson rightly points to the ancient Greek myth of the sculptor Pygmalion, who fell in love with his own creation, as one of the earliest examples of an inanimate object becoming a source of sexual pleasure and companionship.

However, the actual history of the blow-up doll is much more recent, and it’s tied to a much less surprising source than ancient Greek mythology: sailors.

The modern blow-up doll, in the words of Ferguson,

…has its most direct antecedent in the cloth fornicatory dolls used by sailors on long voyages. The dame de voyage or dama de viaje was originated by French and Spanish sailors at the height of their respective naval empires in the seventeenth century. This was the beginning of the modern sex doll.

At the time, sailors would often spend years at sea. In their lengthy travels away from their wives at home and their mistresses in the ports, the sailors found solace and companionship in the form of life-sized cloth dolls.

These early sex dolls were crafted from all kinds of fabrics, and stuffed with straw and sawdust. They required of their user a lot of imagination, as well as high tolerance of unsanitary conditions, since it’s very likely they had to be shared between several people.

“Made of cotton and presumably held together by dried sperm,” writes Amy Wolf, “the dame de voyage was a hotbed of venereal diseases, and it’s perhaps fortunate that no specimens—or even images!—of such dolls exist today.”

“With my dolls there is never any blackmail, or jealousy, argument or illness. They are always ready, always compliant.” Thus says a character named Dr. P… to the main protagonist of René Schwaeblé’s 1904 novel, The Misfits of Paris, at the beginning of Chapter XXVI, quite appropriately titled “Homunculus.” The discussion is considered one of the earliest overt references to sex dolls in the modern era.

From the discussion, we learn that—sometime at the turn of the century—on the Rue Chaptal in Paris, a man could buy himself a lifelike and inflatable rubber doll for 3,000 francs (about $15,000 today), or even just 1,000 francs ($5,000) if he was comfortable with the lower half only. We also learn that both replicating human figures for sex and buying them for use were considered blasphemous acts, severely punishable by law—which explains why we know so little about how the dame de voyage evolved to become a proper blow-up doll.

But we do know that throughout the entire first half of the 20th century, famous men from all over the world, from artists to scientists, took the risk of procuring such dolls. For example, Austrian Expressionist Oskar Kokoschka commissioned the construction of a life-sized doll of Alma Mahler, Gustav Mahler’s widowed wife, to keep him company after Alma refused his marriage proposal.

Inspired by this act, Hans Bellmer—the man indirectly responsible for one of Beatles’ most controversial album covers—developed an obsession with crafting “uncanny, eroticized dolls” in the early 1930s. Rather than being mere frozen Charlottes, these dolls had movable ball joints, reversible hips/torso, white socks, and girlish shoes—and, in the words of Ferguson, “differed from the functional sex doll only in that they lacked the necessary orifices for penetration.”

In Bellmer’s case, the impetus for creating such dolls was his unrequited—and unrequitable—love for a 15-year-old cousin named Ursula. It is of such forbidden desires that the original dream of the sex doll might have sprung up; in many ways, modern blow-up dolls are the birthchildren of obsessive and desperate love.

Even though we don’t really know who built the first inflatable sex dolls, Hans Bellmer is justly considered “the father figure” of the modern blow-up doll. So, what does Hitler have to do with it? The story is just too fascinating not to be told.

It starts with Heinrich Himmler, the highest-ranking SS officer, sending Hitler a discreet memo regarding a sensitive matter: the psychological welfare of the German troops in invaded France. In the note, Himmler supposedly expressed his concern about the debilitating effect syphilis and other sexually-transmitted diseases were having on Nazi soldiers, remarking that the greatest danger in Paris wasn’t the Resistance movement, but “the widespread and uncontrolled presence of whores”.

If the story is to be believed, Hitler agreed to Himmler’s assessment, and thus the Borghild Project was born. Rumors claim that soon after this, Adolf Hitler ordered that “a traveling army of gynoids” be sent to the front lines “to follow the conquering Wehrmacht across the battlefields of Europe” and prevent soldiers from risking their health on a “quick adventure.”

Franz Tschackert, an expert in synthetic materials, was given the role of the project’s supervisor, and the German Hygiene Museum in Dresden was chosen as the research and development facility. The project was closely guarded and kept secret, and supposedly lasted from June 1940 to January 1942, However, merely a week after placing the first order, Himmler put the project on hold. It’s here that the narrative starts falling apart.

A Nazi Deflategate: the evidence that never was

At a casual glance, the story of these unlikely “Nazi Sex Dolls” reads fairly well, name-dropping several high-ranking members of Germany’s Nazi party, and using some verifiable evidence in the form of Himmler’s memo. But despite all of this, there is no proof that the Nazis were ever interested in using sex dolls, in or around the front lines.

Conveniently, any remains of the blow-up doll project was supposedly destroyed in allied attacks, and the main supporting evidence for the theory relies on two photographs rescued from a trash can in the museum’s laboratory by Arthur Rink, a sculptor involved in the project. These photographs, however, were later dismissed as fakes, putting an end to the idea that Adolf Hitler invented blow-up dolls.

Moreover, the German Hygiene Museum, which was supposedly the manufacturing site, has no record of the Borghild Project ever taking place, and no surviving employee has heard any credible evidence the story is true.

Uncovering the truth behind the Hitler/Sex Doll Hypothesis

The odd thing about the Hitler/sex doll theory is that it was probably never even meant to fool anyone. It’s just that it inadvertently succeeded because, well, it’s a great movie-worthy story! However, as it became more widespread and accepted among the general public (which, as a rule, never delves deep enough) myth-debunking website Snopes got involved.

They did some digging and managed to trace the viral roots of the story to a 2016 blog post published on a horror-genre blog, the 13th Floor. In it, the anonymous author openly admitted the absence of evidence for his theory, while acknowledging his debt to a certain journalist Norbert Lenz, and his undated article, “The Borghild Project—a Discreet Matter of the Third Reich.”

The problem is that Lenz has published nothing other than this article throughout his entire career! Moreover, his article is the only one which mentions the sculptor Arthur Rink. Unsurprisingly, Rink has proved to be an extremely hard man to find even a quote from, which hasn’t stopped several large news outlets (like the Daily Mail, for example) to have reported the claim Adolf Hitler invented blowup dolls as accurate.

The Aryan dream that was Bild Lilli, the original sex doll

OK, Borghild may have never existed, but Bild Lilli did—and she was everything her fictitious Nazi cousin is concocted to have been: a buxom Aryan beauty, with pursed lips, blue eyes and blonde hair, pure though flirtatious, innocent while racy. The creation of an artist named Reinhard Beuthin, Bild Lilli was (according to Ferguson) “the first sex doll marketed as such,” and also—the direct inspiration behind Barbie.

Before Bild Lilli became a 11.5-inch plastic figurine, she was a flirtatious, gold-digging cartoon character, often found in provocative positions and wearing revealing outfits. The doll’s success was due in part to its risqué nature, as well as its affordability. Soon after it debuted as a sex doll in 1955, an American businesswoman by the name of Ruth Handler saw it in a German shopwindow and brought the concept back to the US.

She then created a slightly different version of Lilli, and named her Barbie, short for Barbara. Released in March 1959, Barbie became an instant success. Handler’s company Mattel eventually bought the rights to Bild Lilli’s design, turning the first sex doll in history into the most celebrated children’s toy. The Bild Lilli doll is largely forgotten today, but her legacy lives on in Barbie. For better or for worse.

So, to recap, Hitler didn’t really invent the inflatable sex doll, even though who actually did—is a mystery. The original inventor has been lost to history, but it’s likely he was a lonely and sexually frustrated European sailor, or a turn-of-the-century bohemian in love with one of his relatives.

We’ve come a long way since then. Rather than bundles of cloth or plastic figurines, we have hyperrealistic (and hyperexpensive) sex dolls, boasting synthetic flesh, differing hair colors, realistic bodily fluids, and AI-based verbal responses. Those old European sailors missed out on all the fun, didn’t they?…

Castrato Singers: Young Boys Mutilated in the Name of Art