Written By John McKenzie
in Culture 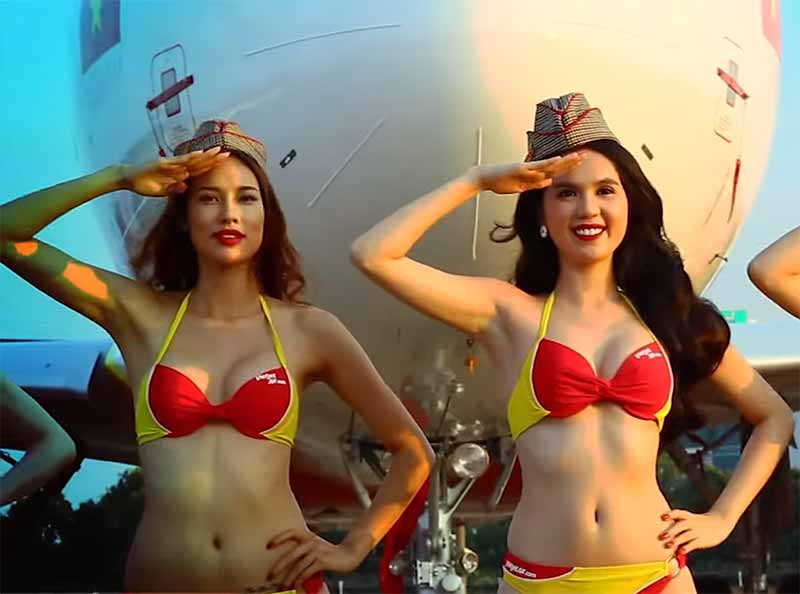 With a market capitalization of over $1billion Vietjet's distinctive marketing has reaped huge dividends. (Photo: Youtube/VietJet)

If you’ve ever been a passenger on a commercial airline you’ll have noticed certain established norms; like safety drills no one pays attention to, ropey in-flight meals and fully clothed flight attendants. Budget Vietnamese carrier, VietJet, who launched in 2011, has been happily usurping one of the above traditions since day one. In fact we’re fairly certain that corporate bikinis were never really ‘a thing’. Not until attendants in VietJet bikinis sashayed onto the flightdeck and started dispensing ‘itsy bitsy teeny weeny’ sachets of cashew nuts.

Yes, those wiley Vietnamese airline moguls bet the house on a backwards PR strategy straight from the book of ‘Anything Marketed Before 1980’. Guess what, it worked, like billion-dollar-worked. Six years later VietJet has surpassed the market capitalization of it’s fiercest rival, Vietnam Airlines and is now Vietnam’s biggest airline carrier. Earlier this year the budget airline went public with a $167m IPO on the Ho Chi Minh City Stock Exchange. Initially valued at a shade over $1bn, it’s trading debut saw shares jump 20% in value.

In the above promotion scantily clad women are adorned in wet shirts and VietJet bikinis. The Beatles split in 1970. We’re guessing this is roughly the same time that the concept and storyboards for this advertising campaign were sealed in a time capsule.

So what’s fueling all these VietJet bikini-related shenanigans? Well, a swift rise in Vietnamese living standards has seen demand for travel and flights increase. VietJet’s market focus is working class Vietnamese who have an increasing amount of disposable income. With passenger numbers set to rise 30% from 15 million in 2016 the company looks to be on an upward trajectory.

All good then? Well yeah, apart from the dodgy, male-centric, 1970’s marketing. Let’s face it, a similar approach from the CEO of a western transport behemoth would have them ousted in a New York minute. Travis Kalanick, we’re kinda takin’ a sidelong glance at you. So, perhaps the biggest surprise here is that the controversial ViaJet bikinis marketing strategy has been masterminded by a woman!

Nguyen Thi Phuong Thao is the founder, CEO and majority shareholder of VietJet. At 47 she is now a billionaire after taking the airline public earlier this year. Not only is she a billionaire, she is Vietnam’s very first self-made billionaire and one of the most powerful women in Asia.

So why are they hitting the headlines now? Well, VietJet have opened a new route to Jakarta, Indonesia, a country with wildly different standards for airborne dress code. Bureaucrats in the majority Muslim country were concerned that VietJet business practices would conflict with religious observances in the conservative Muslim nation. Or, mainly, they were worried that VietJet employees might strip half-ass naked at 30,000 feet.

Of course this is not the first time that VietJet has courted controversy. Back in 2012, there was a throw-down over an impromptu bikini dance on one of it’s flights. Celebrating a newly opened route to the tourist resort of Nha Trang the company hired five local beauty pageant contestants who gyrated, shoogled and wiggled their way through 3 Hawaiian themed songs. Of course, all five women were resplendent in their VietJet bikinis. This happened in Vietnamese airspace and without permission from the national aviation authority. The aviation bosses were furious, and after much harrumphing, VietJet were fined $880. So, if you’re going to gyrate and shoogle over Vietnam, invite the top brass, or be prepared to pay for it.

Thankfully an international incident has been avoided in this latest VietJet drama. The airline’s deputy director for commercial affairs Jay L Lingeswara smoothed things over in a manner that’d have Petyr ‘Littlefinger’ Baelish positively purring.  Lingesarw stated “We strongly believe and are committed to offering the best and suitable services to the Indonesian market,” and also, we’ll make sure they wear clothes and not prance around in VietJet bikinis.