Written By Jade Emmons
in Tech 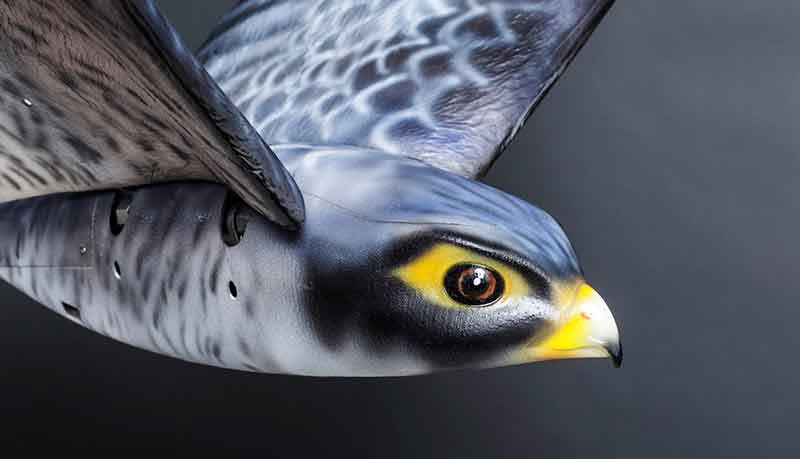 The robird drone will keep Edmonton airport safe by mimicking a raptor and scaring the absolute bejesus out of other birds (Photo: Clearflight Solutions)

We’ve got a new hero flying our skies, Robird, and it’s taken inspiration from the most unlikely of places – Flappy Bird, a mobile game that went viral in early 2014. Flappy Bird may no longer have legions of fans feverishly saving it from crashing into pipes, but its legacy still flies high. The Robird drone now works to prevent disasters like the 2009 Hudson River crash. For those who need a reminder, that’s the one that turned into the 2016 Hollywood blockbuster Sully.

In the 2009 incident a large flock of Canadian Geese flew into the US Airways plane’s engines, causing catastrophic engine failure. It was a wake up call for the aviation industry. Up until then, the idea that birds could cause such monumental damage hadn’t really been considered.

To prevent a similar accident from happening in the future, Clear Flight Solutions created a bird-like drone with the sole purpose of flying around airport buildings wildly flapping its wings. Dubbed Robird, the drone establishes a territory that keeps real-life birds well away.

Before Robird, the traditional way to keep birds off airport premises was to hire a skilled falconer. The Robird drone does the same thing as a falcon, but without the added responsibility of feeding, training and having to wear a silly hat.

The reason why Robird drone works so well is it uses a bird’s natural behavior to its advantage. Birds of prey are very territorial, so if a falcon-like creature is flying around, other birds aren’t likely to hang around. When birds see Robird, they sense danger and stay far away from the drone and the airports that it protects.

Ever been called a bird brain? Well it turns out that there’s some truth to that insult. Birds are forgetful creatures and after a long period of time, they tend to venture back into the areas they once thought dangerous. Luckily for Clear Flight Solutions, this means Robird has a constant and steady stream of business.

Robird has the appearance (and weight) of a falcon or eagle. Falcons are the most widespread bird of prey, whilst eagles are top of the pecking order. This realistic looking drone flaps its wings and steers with its tail fins, hence the similarities with Flappy Bird. Robert Jonker, the Operations Manager at Clear Flight Solutions, even claims that Robird can be used to steer other birds in specific directions, just like a sheep dog.

The drone has been tested several times and according to Robert, has worked incredibly well in all its tests.

Robird has taken 15 years to totally perfect, and its now ready to spread its wings across the world.

But it’s not cheep!

One downside to Robird is the cost of hiring the drone. Clear Flight Solutions doesn’t sell Robird as a product, instead selling its services for anywhere between $1000 to $1500 each visit. That said, the price of keeping our planes safe should be priceless.

Robird was developed and tested in the Netherlands. A further issue could arise as the drone begins to work internationally. Up until now, Robird has only had to service the relatively small area of the Netherlands (at 16,000 square miles). The real challenge for Robird will come when it moves into the US – at 3,800,000 square miles, Robird is going to have a lot more ground to cover.