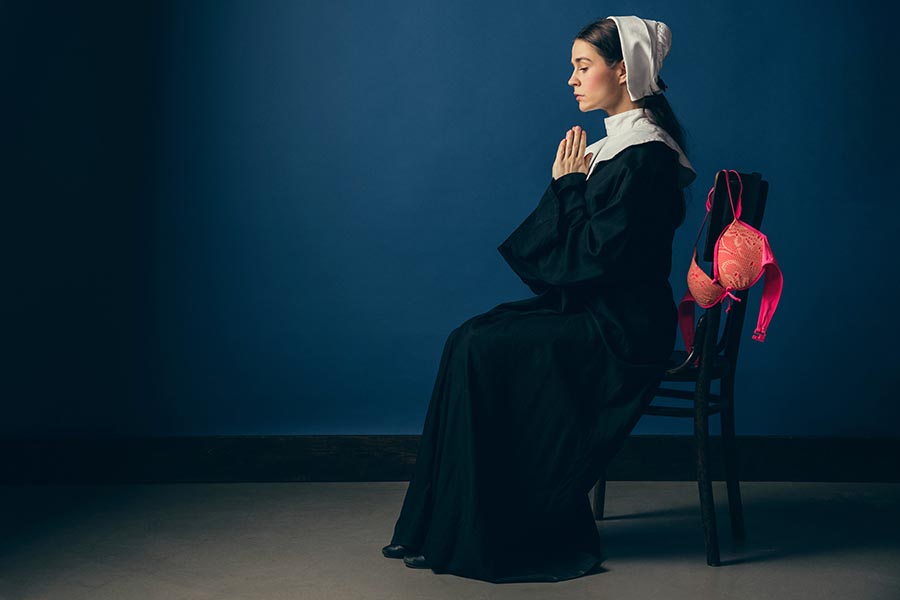 Though textile and fashion historians have a relatively good idea of what citizens wore from the 18th century onwards, the centuries before are less clear. (Photo: Shutterstock)

In modern times, underwear is a complicated issue and seen as more than just clothing. What is there to primarily provide protection from the elements and to preserve modesty has come to mean so much more. Though medieval underwear was a little bit different, the type of underwear you wear, and, indeed, how you wear it, today is perceived as a mark of class, taste, comfort, and even emotion. It is a choice to be considered depending on what the day ahead holds. Important interview? Everyone has a pair of lucky pants. Hot date? Time to bring out the best, and yes (gasp), even ironed underwear. Choose your weapon wisely.

Particularly since the rise of mass advertising in the 1950s, the humble undergarment has surpassed its use of protective covering. For many, underwear has become something to be coveted, admired, taken off, and even matched to the clothes that cover them. Each bra promises to provide more support than its predecessor, while elasticized boxer shorts roll off factory lines, promising to transform the average joe who buys them into a sultry underwear model.

Indeed, the prevalence of underwear and lingerie in today’s society means that the fashion historians of the future will have a field day with the sheer amount of physical and visual sources they can study and scrutinize. However, when it comes to learning about the medieval underwear our ancestors wore, present historians have not been quite as fortunate.

Though textile and fashion historians have a relatively good idea of what citizens wore from the 18th century onwards, the centuries before are less clear. This historical gap has to do with poor preservation of organic materials (which include leather and textiles) and the lack of visual sources from that time. Who, after all, wants to be painted or memorialized in their underwear? Though medieval underwear remains somewhat of a mystery, we do have some idea what underwear citizens, particularly men, wore in the Middle Ages.

Using a collection of sources, including paintings, woodcuts, and illustrations, historians have been able to ascertain that the medieval underwear men wore was shirts and braies. In illustrations of both sacred and secular themes, men are depicted as wearing a small piece of cloth covering both the pubic area and the buttocks that was fastened in a bow at the hips.

Interestingly, though men of this era are thought to have worn tights, that was not the case. What men actually had on their legs were long socks which stretched from foot to hip, creating the look of pants. These were held up by fasteners at the waist, and when it became fashionable for men’s doublets (the main upper body garment for men) to extend past the waist, codpieces became a necessary addition. Deriving from the medieval word “cod” (meaning “bag”), these items were produced in an array of colours, drawing attention to the male pubic region.

Men’s underwear is far more prominent in historical sources than women’s. This is believed to be because the depiction of men in their undergarments was perceived as humorous, rather than crass. Indeed, the baring of buttocks was a source of hilarity for a medieval audience. In Antapodosis, a literary satire of the kings in the first half of the 10th century, historian, diplomat, and bishop Liutprand of Cremona writes about the time when a man who committed treason was brought to the king and flung at the monarch’s feet. According to the record, the unfortunate man’s tunic was too short, which exposed his genitals much to the amusement of the captivated crowd. This comical portrayal is a stark contrast to that of women who were drawn or shown in their smalls, where generally they were seen as trying to usurp a male’s authority or as having loose, wayward morals.

The lack of visual and physical sources has made trying to confirm what medieval woman wore beneath their bodices and flowing skirts more difficult. This gap has led to a widespread belief that women wore nothing other than a loose-fitting smock, where the fabric it was created from was dependent on your financial situation. Much like today, where the poorer of us choose high street and the wealthier go for designer, poorer people in the Medieval Period resigned themselves to smocks fashioned in plain cloth, whereas wealthier classes with disposable income opted for silk. While modern-day underwear is designed to create the desired body shape and complement the outer garments of its wearer, the shapeless smocks favoured by medieval woman contrasted the clothes worn over them. Specifically, the fashion of the Medieval Period favored tight-fitting clothes, especially on the upper half of the body. This style can be seen particularly towards the latter half of the 14th century, where women sought the appearance of a long waist and used a corset to achieve this.

However, though it has been suggested that woman wore no medieval underwear whatsoever, we need to consider that women in the Medieval Period (just as now) had to deal with a monthly inconvenience: specifically, menstruation. Two particular historical sources, both penned by men, suggest something similar to medieval underwear were worn by women—at least for certain periods of time. Two translations of the bible, the Douay–Rheims Bible (Old Testament published 1609–1610) and the King James Bible (published in 1611), both make references to “rags of a menstruous woman” and a “menstruous cloth.” And medieval underwear would’ve been needed to keep those cloths in place.

Generally, however, there is little information on menstruation in the Medieval Period that could give us more insight as to what role underwear played in it. As the historian Irina Metzler notes in Disability in Medieval Europe: Physical Impairment in the High Middle Ages, c. 1100–c. 1400, menstruation was regarded as “unclean” by some medieval authorities and other men, so it may have been a matter that they did not want to draw attention to. Another historian, Barbara A. Hanawalt, in her book Growing Up in Medieval London: The Experience of Childhood in History, suggests the limited primary sources on this topic are due to the topic not being greatly significant for women, and that because medieval medical experts did not know about fertility cycles, women had no reason to keep charts of their menstrual periods in relation to conception.

It has been considered then that the medieval underwear women might have been “drawers” similar to those of their male counterparts. These are known and referred to in Latin as femoralia. Elizabeth I, for example, was depicted in her 1603 funeral effigy in a traditional-style corset and drawers. Much like how someone today may see their partner wearing a particular underwear a telltale sign of their having an affair, the famous 17th century diarist Samuel Pepys, when contemplating the possibility of his wife having an affair, wrote: “But I am ashamed to think what a course I did take by lying to see whether my wife did wear drawers today as she used to, and other things to raise my suspicion of her but I found no true cause of doing it.”

What women wore on their top halves as medieval underwear had also, until recently, remained uncertain. However, archaeological findings in Lengberg Castle, in East-Tyrol, Austria, have given us more information. During the 2008 reconstruction of the castle, a vault was found hidden beneath the floorboards of a room on the second storey, believed to have been placed there during the 15th century. Whereas wood, leather, and textiles tend to deteriorate after hundreds of years, desiccation occurring as a result of the dry conditions within the vault meant that the found items were extremely well preserved. Four of the linen fragments that were unearthed resembled bras as we know them today, defined by the presence of distinct cups for the breasts.

Two of the bras found had these cups; however, only one cup on each remains preserved.  A third bra bears more resemblance to a modern bra, with two shoulder straps and an indication of a back strap. It is decorated with needle-lace and finger-loop braided laces, suggesting that it was designed with aesthetics in mind just as much as practicality.  Certain details hint that this medieval underwear was worn for aesthetic reasons in addition to practicality. The fourth and final bra found bears similarity to the longline bra popular in the mid-twentieth century. With narrow shoulder straps and cups fashioned from two bits of linen, the bra includes fabric that extends to the ribcage and finished with a row of six eyelets for fastening with accompanying lace. The findings from this 12th-century Austrian castle are therefore extremely useful and important, as they are few of the only tangible sources that give historians an indication and understanding of the medieval underwear some women might have worn in the Middle Ages.

So next time you catch yourself complaining about underwear that doesn’t match with your clothes or that feels slightly uncomfortable, just be thankful that the styles, shapes, and comfort levels available to us have evolved substantially since the times of our ancestors.

Why Are Clouds White?

The Grotesque Answer to How Do Starfish Eat?