Why Are Clouds White? 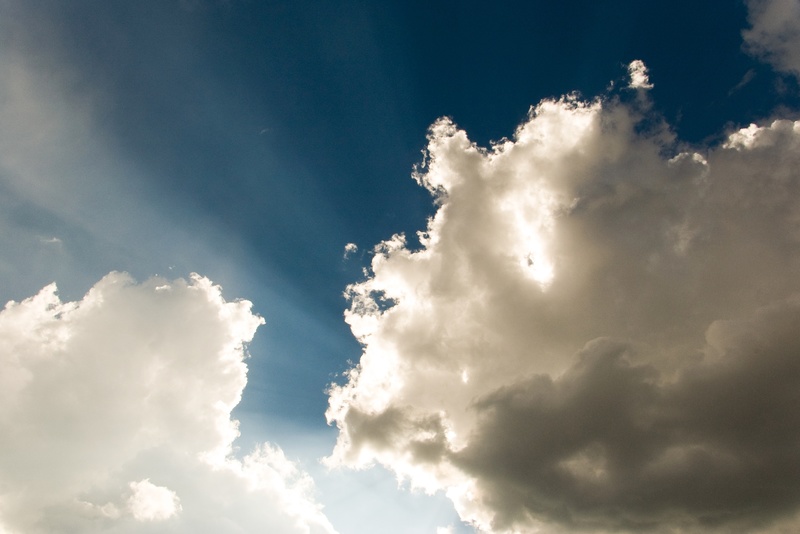 Clouds are made up of air and water. When light passes through a cloud, the water droplets scatter the light reflected from the sun. (Photo: PxHere)

Providing the sole contrast to our pale blue sky, we tend to take the white color of clouds for granted. That is, at least until they darken. But why are clouds white? The answer has its origins in sunlight.

Human vision can detect electromagnetic radiation with wavelengths between about 400 and 700 nanometers. Eyes “see” color based on what wavelength of light is being reflected off objects and into our retina, which contains light-sensitive cells. The color we perceive as blue has the shortest wavelength, whereas red has the longest. Sunlight is a form of white light, which means that it contains every color in the visible spectrum.

If you can recall high school science class, you know that in order to split up white light, it has to pass through an object capable of separating it into its constituent colors, equivalent to a rainbow. Most objects absorb all colors except for one, which is reflected into our eyes and perceived as the color of the object. Particles floating around in the sky are great at absorbing all wavelengths of light except for blue, which is why the sky appears blue.

Water droplets, on the other hand, are not very good at absorbing light. Smaller particles are better at scattering shorter wavelengths, while larger particles scatter all light relatively equally. The former, known as Mie scattering, is the reason why the sky is blue, while the latter, known as Rayleigh scattering, is responsible for the white color of clouds. The water droplets in clouds are usually much larger than the wavelength of visible light, so the white light from the sun is fully reflected. In addition, the colors that are scattered by smaller droplets all blend together before reaching our eyes. Both then contribute to the answer to the question “Why are clouds white?”

Clouds are formed when water vapor condenses on small particles that are floating around in the lower atmosphere. Smaller clouds have a roughly equal distribution of water molecules throughout, which is why they appear uniformly white. But as they grow larger and taller, the heavy water droplets sink to the base of the cloud, making it harder for light to penetrate. This difference is why some clouds are white all around except for their darker base.

As the water droplets within clouds grow in size, they start to absorb more light as well. When most of the cloud is composed of these large droplets, the cloud turns dark in color because little to no light is reflected into our eyes. These droplets typically grow heavy enough that they fall to the earth as rain.

The plethora of colors seen at sunrise or sunset is also the result of particles scattering light. As the sun sets, or rises, light has to travel much farther to reach the surface of the earth than if it were overhead. Because air particles are more efficient at scattering light with a smaller wavelength, all that is left when a light from a sunset reaches our eyes are the longer wavelength hues, most commonly red and orange.