Ferric Fantasies: The Strange Saga of Popeye, Spinach and Strength

Written By Christine Bradley
in Culture 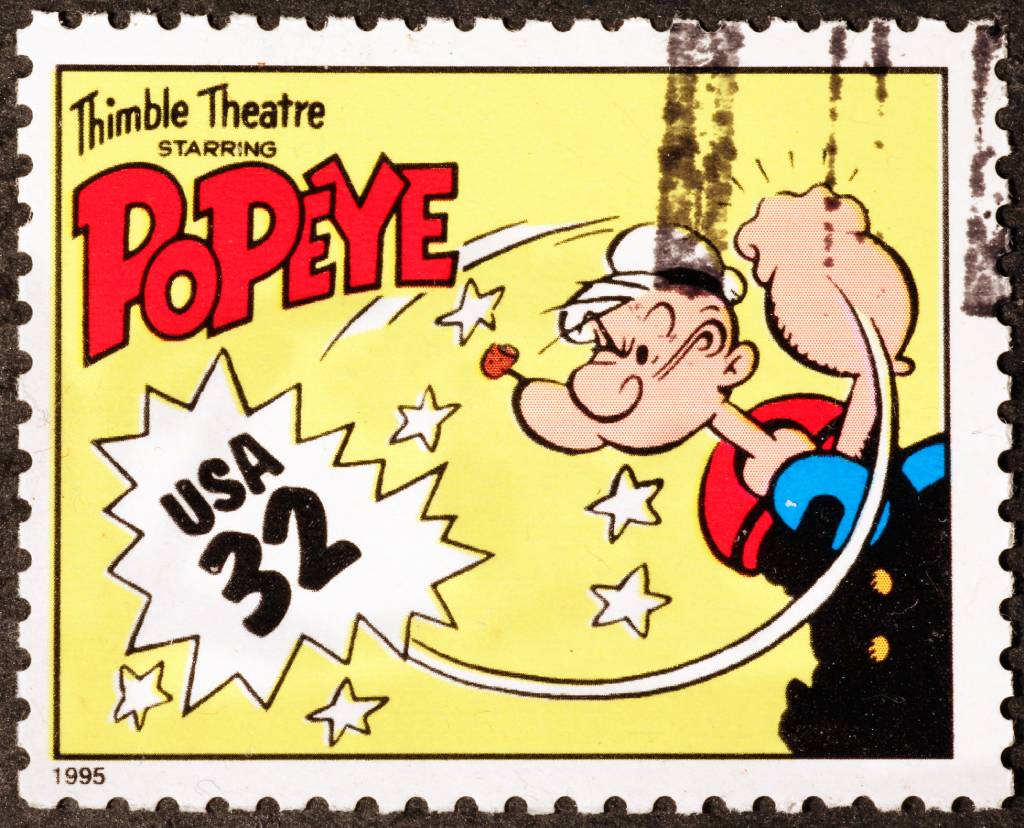 Almost a century after his first appearance, the spinach-loving Popeye cartoon character remains a surprisingly active source of myth and misunderstanding.

Has the diet of any other fictional character been as over-examined and misrepresented as that of Elzie Crisler Segar’s Popeye, the one-eyed sailor man? Over 90 years of error and exaggeration have created and spread a series of dubious science legends that somehow never entirely die.

Here’s how the story goes

While Winnie the Pooh is forever associated with honey, Bugs Bunny with carrots, and Wallace and Gromit with Wensleydale cheese, none of these foods were ever as much in need of an image makeover as plain, ordinary spinach.

In 1929, the humble spinach plants’ fortunes changed as cartoonist Elzie Segar introduced his new character, Popeye, the sailor man. Eternally in pursuit of his beloved Olive Oyl or a fight with the dastardly villain Bluto, Popeye’s larger-than-life adventures were powered by one surprising substance: spinach.

Squeezing open cans of spinach with a single hand and gulping the contents down his throat, Popeye would go on to perform amazing feats of strength and agility. Children loved him, and Popeye soon became synonymous with both spinach and power in the public eye. The high iron content of spinach was widely credited as the source of his superpowers.

Around this time, people began to buy more spinach. Popeye was credited with increasing American consumption of spinach (then seen more as animal feed in some places) more than a third by 1936. Recognizing the dollars rolling in for its farmers, the spinach-growing town of Crystal City, Texas, even decided to erect a statue in his honor.

In the meantime, Popeye’s fame spread around the world. For generations, many parents have used Popeye films, cartoons, videos, etc., to persuade their children to eat spinach, get their iron and grow strong.

Eventually, the public misperception of spinach’s iron content came to be explained by the story of a German chemist. Dr. Erich von Wolff was said to have misplaced a decimal point in the analysis of spinach nutritional chemistry in 1871, wrongly showing an iron level ten times its actual value.

The alleged von Wolff decimal point mistake gave life to further stories. Other chemists variously corrected this error, reprinted in 1920s German textbooks with no check, believed by US scientists until the 1930s, and then debunked, caused by iron from the spinach container.

There was only one problem with the Popeye story and the scientific sequels it spawned and spread. From beginning to end, much of it probably isn’t true.

Per 100g, spinach contains 2.7mg of iron, around the same as dried apricots or beef, and considerably less than lentils (6.5mg/100g) or cashew nuts (6.6mg/100g). On top of this, the iron which is present in spinach is difficult for humans to absorb.

Unless you’re suffering anemia related weakness, a hefty dose of iron is unlikely to confer greater strength. As a serving member of the coastguard and later the navy, presumably with access to a diet full of iron-rich seafood, Popeye isn’t an obvious candidate for anemia.

Popeye and his creator never made a single reference connecting iron and spinach.

Sagar attributed the strength-giving nature of Popeye’s spinach to vitamin A, as opposed to iron. A 1932 cartoon strip shows Popeye downing his favorite vegetable while declaring that “spinach is full of vitamin A an’ tha’s what makes hoomans strong and hefty.”

There is no hard evidence that Erich von Wolff made a decimal point error for iron in an analysis of spinach or that this informed public Popeye beliefs.

While it’s a nice twist that wraps the whole Popeye/spinach story up neatly, the tale of the 19th-century German chemist who miscalculated the iron content of spinach appears to be apocryphal.

This branch of the narrative made its first appearance in 1972. After the story was stated publicly by highly respected academics, journalists and other scientists were less inclined to question it or search for its origins. Along with other elements of the Popeye story, it was eventually investigated and convincingly debunked by Dr. Mike Sutton in 2010.

Regardless, the Popeye and von Wolff decimal point error story has continued to appear in books, media articles, and online sites, ironically often quoted as a warning against accepting evidence on trust without checking the facts.

The truth about spinach

Still, don’t let the confusion put you off your vegetables just yet. Let’s take a little look at the reality of what spinach can and can’t do for you.

Stories of historical error aside, spinach contains a respectable 2.7 mg/100g of iron. Unfortunately, even if someone eats this amount of spinach, not all of this iron will be absorbed.

There are two forms of iron in the foods we eat. The first is “heme” iron, which is found in meat and seafood and is easier for the body to absorb. The other form is “non-heme” iron, which is discovered in plants including spinach and is less readily absorbed.

Spinach contains oxalic acid, which inhibits the uptake of iron in the human body. Even if someone eats a reasonable dose of iron from spinach, oxalic acid prevents total absorption.

Read more: Wojtek the Bear: The Syrian Brown Bear Who Inspired an Army

Spinach contains 469mcg of vitamin A and 5626 mcg / 100g of beta carotene, a vitamin A precursor converted by the human body. Vitamin A is used for protein synthesis, is essential for building muscle, and therefore, is linked to strength.

Spinach is a good source of plant protein, with 2.9g per 100g. Protein is vital for building muscles and is linked to physical strength.

Over the years, the Popeye-linked spinach saga has evolved into a meta-level illustration of how a good story may steamroller over facts in pursuit of coherence or humor. But one kernel of truth remains at the heart of it all – spinach is good for you. Eat your greens, kids!

The Imperfect Hue: What Color is a Mirror?