Written By Brittany Muldoon
in Nature 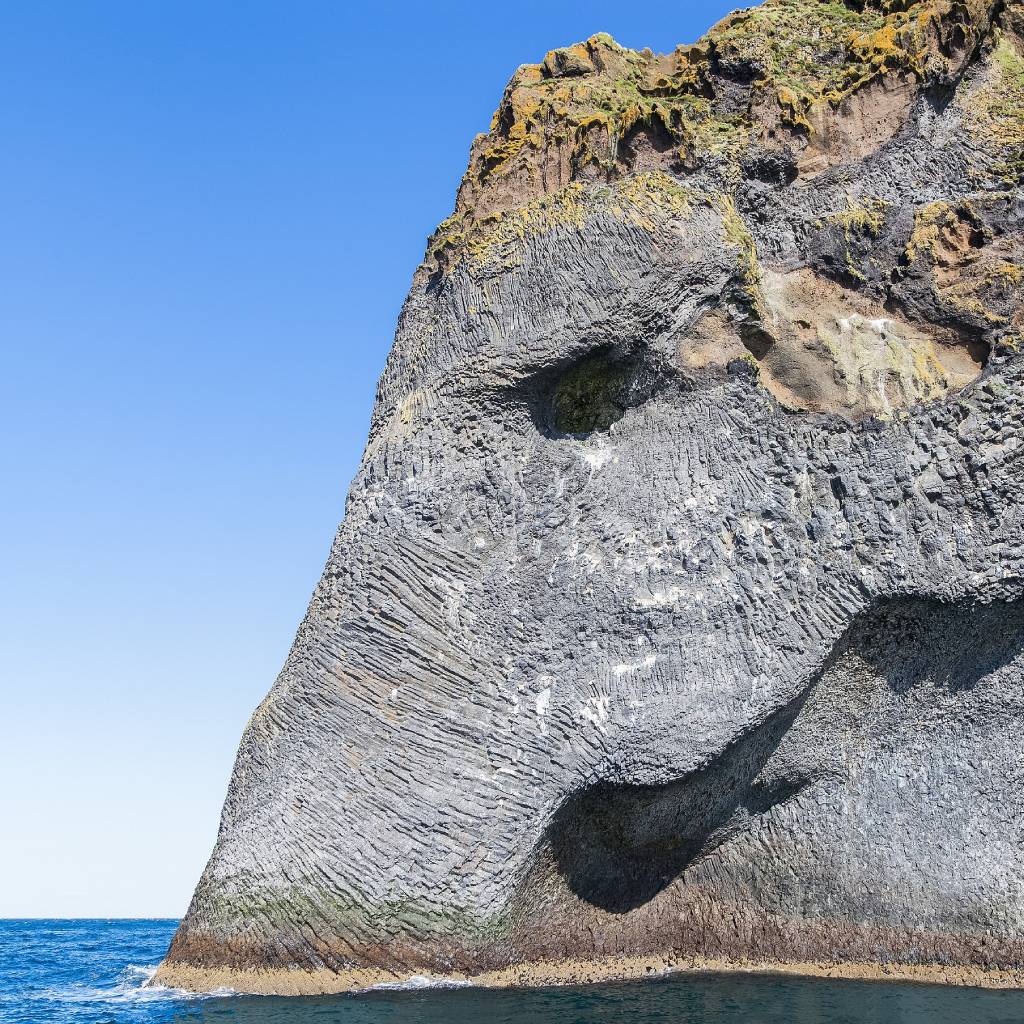 Iceland is a popular tourist destination for countless reasons. It’s the home of the famous Blue Lagoon geothermal spa; you can see the Northern Lights and explore the beautiful natural landscape. But part of that landscape is a bit unusual: ever heard of Elephant Rock? We didn’t think so. Regardless, this strange formation should be at the top of your list when visiting Iceland.

Well, what is it? An elephant? A rock?

Iceland’s Elephant Rock is a rock that looks like—you guessed it—an elephant. Part of the Westman Islands (Vestmannaeyjar) archipelago off the southern coast of Iceland, Elephant Rock is one of the area’s main attractions. This giant natural rock formation looks exactly like a large elephant sticking its trunk into the water. This enormous petrified rock elephant has astounded visitors worldwide with its realistic appearance.

How did Elephant Rock form?

There are many legends surrounding Elephant Rock in Iceland. The gray color and uneven rock texture make the look even more realistic, resembling actual elephant skin. Many Icelanders joke that an elephant decided to stop to rest and fell asleep. In the meantime, it got too much sun and transformed into stone and has stayed there ever since.

Others say that humans intervened, and someone carved this shape into the rock.

Surprisingly, many prominent online sources are completely inaccurate regarding the creation of Elephant Rock. But more on that later.

It may not be easy to believe, but it came about entirely naturally. To understand how you need the backstory of this gigantic rock off of Iceland’s south coast.

Elephant Rock is located on Heimaey (Home Island in English), an island in the Vestmannaeyjar, or Westman Islands. Elephant Rock is found on the island’s western coast on Mountain Dalfjall.

Heimaey has the most enormous land mass of them all and is also the only inhabited island in the archipelago. This is surprising, as it’s not common for a place with volcanic activity to have a permanent human population.

At 200 meters above sea level with a surface area of 13.4 square kilometers, this island is a permanent settlement. It’s worth noting, however, that after the evacuation during the 1973 eruption, the population has never reached its previous levels. Even though it lost a few residents, the eruption added a few kilometers to the island’s volcano-formed coast.

Iceland is home to volcanoes galore, so it may come as no surprise that that’s how this rock got its shape.

The Westman Islands have a volcanic past. The archipelago is home to several volcanic islands that are still active today. Eldfell Volcano, a 200-meter high cinder cone volcano, on the island of Heimaey, is one of them.

Eldfell (Hill of Fire in Icelandic) was formed in a volcanic eruption that began suddenly on 23 January 1973 and did not finish until June of the same year.  Whilst not as violent as the loudest sound ever, it did have a lasting effect on the local community, and population levels have never returned to pre-eruption levels. While Elephant Rock pre-dates the formation of Eldfell, its origins are most definitely volcanic. More precisely, it developed into this shape due to the rapid cooling of lava rich in iron and magnesium after a voluminous volcanic eruption.

Elephant Rock, or Elephant Stone, is a famous basalt rock structure formed by this dramatic cooling operation in the middle of the Atlantic Ocean.

Of course, these historic eruptions caused other rock formations, but this is perhaps the most incredible.

Did the Eldfell eruption of 1973 create Elephant Rock?

It may not be a tropical island, but it’s still worth visiting. First, you have to get to the Westman Islands. There are two ways to accomplish this: car or plane.

There are daily flights from Reykjavik airport to the Vestmannaeyjar airport if you don’t have a car.

Can you climb Elephant Rock?

You’ll hike up to the Blatindur summit, the second-highest peak on the island, standing 273 meters above sea level. You’ll enjoy panoramic views of the sea cliffs and other rock formations on a clear day. These include Mount Hekla and Eyjafjallajökull glacier, which are both active volcanoes. You’ll be hooked up to safety lines to ensure your security when you approach the summit.

You’ll hike along the ridge to the west toward the Halldórsskora slope from the summit. This part is challenging but is made easier by manmade ridges on the route down to Elephant Rock.

The final destination and the hike’s highlight is the top of the giant elephant! The view is breathtaking. The dramatic landscapes of the western part of this volcanically-active island are some of the most picturesque you’ll ever see. You’ll have your photo taken, and you can take your time exploring the top of the elephant’s head. If you visit between May and August, you may even spot some puffins around their burrows.

What else is there to do around Elephant Rock in Iceland?

The rock phenomena may be the main attraction, but there’s plenty to do once you’re done hiking this troll-like elephant.

If you want to learn more about the island’s volcanic past, head to the Eldheimar Volcano Museum. Here, you’ll learn the incredible tale of one of the country’s most significant natural disasters. In 1973, when Mt. Eldfell began erupting in the middle of the night, it caused over 5000 residents to evacuate. The island was covered in thick ash, but you’ll still see the remains of some houses preserved perfectly in the modern era underneath.

You may also want to visit Skansinn Church, a small black turf church built in the original Viking style by the Norwegians. It was given to Iceland as a gift to celebrate 1000 years of Christianity in the country.

If you’re looking for a taste of authentic Icelandic culture, then you’ll have to try some quality Icelandic local cuisine! Head to one of the many local restaurants to try dishes made of locally-grown ingredients. You’ll also want to whet your whistle at Brothers Brewery, where all the local beer lovers hang out.

If you can, try to visit during Þjóðhátíð, a huge festival celebrating the history and heritage of the Westman Islands. You’ll enjoy performances and musical acts bringing visitors from across the country and the world to the island.

If you’re looking to expand your outdoor Arctic adventures, check out one of the many celebrated golf courses, Seljalandsfoss waterfall, and more.

There’s no doubt that Elephant Rock in Iceland is a special place. Located on the only island with a permanent settlement, it draws locals and visitors worldwide. Seeing the rock with your own eyes is one thing, but climbing it is a whole other adventure. Put your adventure shoes on and get out there!

Alexandre Villaplane: A Tarnished Legacy in the History of French Football