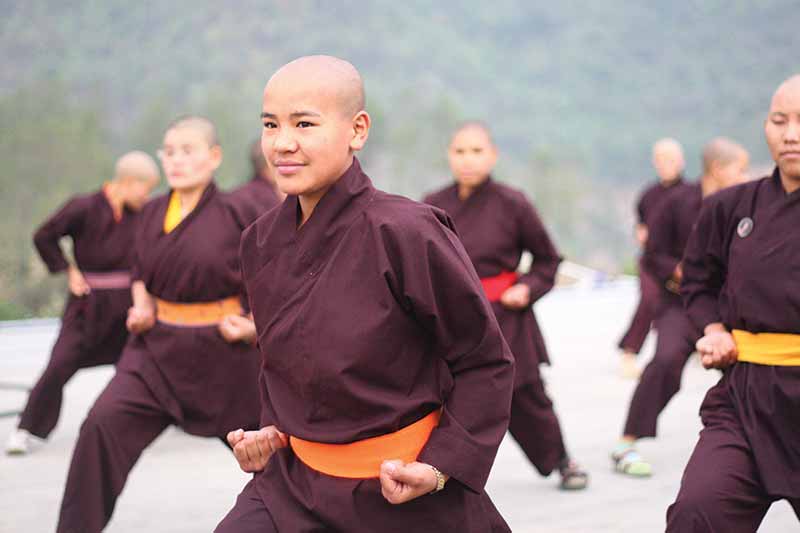 In the mountains of Ladakh, a remote Buddhist community nestles in the Indian Himalayas bordering Tibet. Here, it would seem, exists a world untouched by the passage of time. The chant of monks can be heard from an ancient monastery, and in picturesque temples, Ladakh’s age-old Tibetan Buddhist way of life continues uninterrupted. Well, sort of. There’s also 500 Kung Fu nuns. But apart from that it’s business as usual.

Predictably, the quaint and traditional scene is shattered by the energetic cries of young women, wearing sweatpants and trainers. Gathered in front of a beautiful white temple, they launch themselves into a dizzying array of exercises; stretching, jumping, kicking, and punching on the orders of nuns, dressed in traditional maroon robes modified in the style of karate uniforms. These are the renowned Drupka Kung Fu nuns, they are not quaint and they are not traditional.

The Kung Fu nuns belong to an age-old Buddhist sect, and use their expertise in martial arts to teach women self-defense. Why? Sexual assault is a common problem in India.

“Most people think nuns just sit and pray, but we do more,” says 19-year-old Jigme Wangchuk Lhamo, one of the Kung Fu Nuns. She says they decided to teach self-defense after hearing about multiple cases of rape and molestation. “Kung Fu will make the girls stronger and more confident,” she adds.

Jigme Wangchuk is one of around 500 nuns that belong to the Drukpa Order, the only female order in the patriarchal Buddhist monastic system where nuns are equal to monks.

Traditionally, nuns are expected to serve only – they have to cook, clean, and are not allowed to exercise. However, this changed almost a decade ago when His Holiness Gyalwang Drukpa, the leader of the 1,000-year-old sect, encouraged the nuns to learn Kung Fu. The tedious chores were replaced by a more proactive lifestyle when Drukpa came back from Vietnam in 2008, where he witnessed nuns receiving combat training.

Partly inspired by his own mother, Gyalwang Drupka wanted to promote gender equality and empower the young women, who mostly come from poverty-stricken areas in India and Tibet. He gave nuns leadership roles and taught them practical skills, making it possible for them to even become electricians and plumbers.

The kung fu nuns are active in their communities, primarily Nepal and India, where they care for sick animals and organize eye care camps for villagers.

Read More: The Rise And Fall Of The Victorian Super Drug

Nothing stops them from visiting and helping the less fortunate – even in April 2015, when a massive earthquake shook Nepal, they refused to leave but trekked to villages to clear pathways and distribute food to survivors.

Carrie Lee, president of Live to Love International, a charity which works with the Drukpa nuns to support marginalized Himalayan communities, is thrilled with the nuns’ work: “The Kung Fu Nuns are heroes of the Himalayas.”

Saying they are heroes is an understatement. The Kung Fu Nuns have taken on one of the biggest threats facing women in India today – sexual assault.

Parliamentarians claim these numbers are far below the true number of actual instances of rape and sexual assault. Many women don’t report cases as they are afraid of retaliation, blame and shame by the traditional Indian community.

A wave of public protests after a fatal gang rape of a woman on a Delhi bus in 2012 snapped many out of apathy, forcing the government to enact stiffer penalties on gender crimes. Since then, different government campaigns and civil society programs have increased public awareness of women’s rights and encouraged victims to report abuses.

Concerned about women’s safety in the region, the Drukpa saw an opportunity to help in the fight against sexual predators.

The Drupka Kung Fu nun course includes numerous useful techniques that the women can turn to if they find themselves in vulnerable situations, such as handling being attacked from behind and moves such as takedowns and strikes. The training also includes discussions and role-play of possible sexual assault scenarios. This training and discussion helps the women to overcome the taboo and stigma still associated with rape and sexual assault.

One of the participants, Tsering Yangchen, a 23-year-old student, feels like the nuns’ training has been helpful to her in many ways. “I am often uncomfortable going to the market as there are boys standing around looking, whistling, and cat-calling. I was always hesitant to say anything, but now I feel much more confident to speak out and even protect myself if I have to.”

The Drukpa Order is adept at finding imaginative ways to highlight problems that are commonly avoided in traditional society. Last year 500 kung fu nuns completed a 4,000 km bicycle trek from Nepal’s Kathmandu to the northern city of Leh in India to raise awareness about human trafficking in the region. Many locals were surprised when they realized that the people clad in black sweatpants, red jackets, and white helmets were women, not only that, they were nuns!

“When we were doing relief work in Nepal after the earthquakes last year, we heard how girls from poor families were being sold because their parents could not afford to keep them anymore,” said the 22-year-old nun Jigme Konchok Lhamo, one of the participants of the ‘Tour de Himalayas’.

“We wanted to do something to change this attitude that girls are less than boys and that it’s okay to sell them,” she said, adding that their bicycle trek showed that women can be equally as strong and as powerful as men.

Recent natural disasters have stricken Nepal and left the poor vulnerable. Thousands of families have been left homeless and without any means of income, which in turn has led to an increase in children and women being trafficked.

The Drukpa nuns said that the 2015 earthquakes were a turning point in their understanding of human trafficking, and they felt a need to do something more than simply travel to disaster-hit villages with rice on their backs.

“People think that because we are nuns, we are supposed to stay in the temples and pray all the time. But praying is not enough. His Holiness teaches us that we have to go out and act on the words that we pray. After all, actions speak louder than words,” said Jigme Konchok Lhamo.

The Drukpa nuns believe they are helping to change attitudes in a region that has doggedly clung on to the traditions of the past. Their core message of equality for all, tolerance and peaceful co-existence is gradually spreading and being acknowledged.

12 years ago the Drupka Order numbered only 30. Today 500 kung fu nuns have rallied to the cause championed by their progressive and enlightened leader, Gyalwang Drukpa.

The Real Life PAW Patrol Saving The Streets Of Bangkok