Written By David McLemore
in Featured 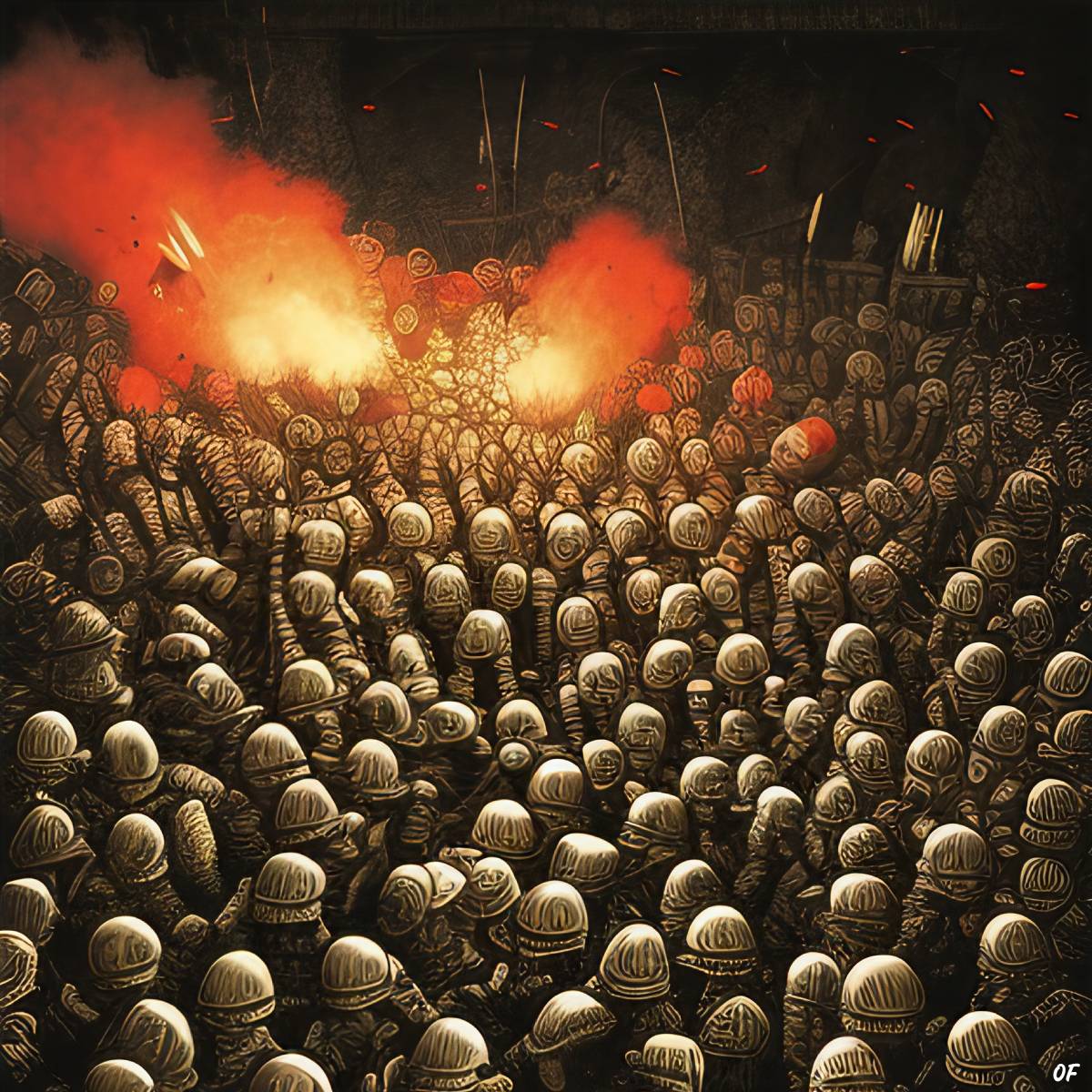 The War of the Bucket by Odd Feed (© Odd Feed)

You’ve heard the phrase “Wars have been fought for less,” but you would be hard put to find a lesser example than the “War of the Bucket.” Yes, it really did occur (in 14th-century northern Italy), and yes, a bucket was indeed involved—but we’ll get into the finer points of that a bit later.

First, we need to give you a good idea of the players involved and the events that led up to this unusual conflict.

When emperors and popes clash

The War of the Bucket wouldn’t happen until 1325, but if we travel back 170 years to 1155, we find ourselves in the middle of another dispute, the one that started it all.

Meet Frederick Barbarossa, one of the greatest rulers of medieval Europe. Crowned King of Germany in 1152, he dreams of restoring the glory of the Holy Roman Empire, and for that, he needs Pope Adrian IV on his side. Ever since Charlemagne and Otto the Great, no Roman Emperor can consider himself “holy” lest he receives the blessing of the Pope.

However, the Pope isn’t easily won over. Adrian IV is a stubborn man who has his own ambitions. He sees Frederick as a potential rival, not an ally. Frederick, in turn, is not one to beg for something he can get on his own, so in the first few months of 1155, he sets off on a military campaign to put things right.

Frederick’s army sweeps through northern Italy, crushing all resistance, and conquering Milan, Tortona, and Pavia along the way. In Pavia, he receives the Iron Crown, and declares himself King of Italy, on April 24. Just two months later, he enters Rome, and Pope Adrian IV—alarmed and unprepared—has no choice but to crown him Holy Roman Emperor, on June 18, 1155.

The crowning of Frederick Barbarossa didn’t end the dispute between the papacy and the Holy Roman Emperor; on the contrary, it merely aggravated it. In one way or another, this conflict would go on to define the next two centuries of European history, particularly on the Apennine Peninsula.

You see, even after receiving the crown, Frederick wasn’t happy with sharing his power with the Pope. So, when Adrian IV died in 1159, he saw an opportunity to take full control of the papacy. He did so by installing three successive antipopes: Victor IV, Paschal III, and Callixtus III.

In response, Pope Alexander III—Adrian’s legitimate successor—excommunicated Frederick from the Catholic Church, and blessed the formation of the Lombard League, a coalition of northern Italian city-states that rose up in rebellion against Frederick. The two would clash several times over the next few years.

The Lombard League eventually defeated Frederick (at the Battle of Legnano in 1176), forcing him to recognize the authority of Pope Alexander III, and the traditional autonomy of northern Italian cities. However, no compromise between the two could ever stop subsequent popes and emperors from continuing their squabble over control of northern Italy.

This resulted in the formation of two warring factions on the peninsula: the Guelphs, who supported the papacy, and the Ghibellines, who backed the Holy Roman Emperor. The factions often came into conflict, leading to a number of intercity wars.

One of these wars was the War of the Oaken Bucket, fought between the cities of Bologna and Modena. Bologna was Guelph; Modena was Ghibelline. The political difference merely exacerbated their natural disagreements over border territories.

Azzo VIII d’Este and the war before the war

Until 1296, the frazioni of Bazzano and Savigno belonged to Modena. And then, the city of Bologna seized both, and it did so with the blessing of Pope Boniface VIII himself.

At that time, the ruler of Modena was Azzo VIII d’Este, who was also the lord of Ferrara and Reggio. A man of violent temper and ambitious tastes, he wasn’t at all interested in losing land—but in acquiring more. So, he decided to attack Bologna.

The ensuing war lasted three years (1296-1298). Azzo VIII’s intention was to become lord of Bologna, and also to take away Bologna’s undisputed political and economic dominion over the entire region. If not in the former, he certainly succeeded in the latter.

His elected successor, Rinaldo “Passerino” Bonacolsi, was determined to finish what Azzo VIII had started.

By 1309, Rinaldo “Passerino” Bonacolsi had become the ruler of four regions—Mantua, Modena, Parma, and Reggio—and he was slowly gaining ground (literally and figuratively) around the territory of Bologna too. A committed agent of Emperor Louis IV of Bavaria, it wasn’t long before he became a thorn in the side of the then-pope, one John XXII.

John XXII didn’t waste too much time in declaring Passerino an enemy of the Church, offering indulgences (that is, spiritual concessions such as grace and absolution of mortal sins) to anyone who could make his life difficult or, better yet, dramatically shorter. The result was a rapid intensification of the border clashes.

It must have been a nice bucket!

In July 1325, in an attempt to put “the fear of the pope” in Passerino, the Bolognese sent a large force to Modena. The following month, they successfully entered Modenese territory and spent at least two weeks marauding the lands. The Modenese refused to give in, and by the end of the summer, they managed to repulse the Bolognese, pursuing them back to their city.

It was reportedly during this counteroffensive that a few Modenese soldiers snuck into Bologna’s town square, and took with them, as a war trophy, a wooden bucket from the municipal well. As if that were not enough, they filled the bucket with other stolen items from Bologna and put it on display in Modena’s city hall.

Unsurprisingly, Bolognese officials took the offense quite personally. After the request for an immediate return of the bucket was refused, Bologna declared war on Modena. The war lasted no more than a few hours, ending after a single battle.

The only battle to be fought during the War of the Bucket, the Battle of Zappolino, was one of the largest clashes in medieval Europe, involving more troops than were present at the 1066 Battle of Hastings!

It took place on November 15, 1325, either toward sunset or at half past three in the afternoon, and saw about 30,000 foot soldiers and 2,500 horsemen on the Bolognese side, pitted against some 5,000 Modenese infantrymen, and about 2,800 horsemen, many of them military-trained German knights. The difference in competence ultimately decided the outcome of the battle. Spoiler alert: Modena won.

The Bolognese leaders did not have much time to organize the troops, having recalled them in a hurry from Bazzano and Ponte Sant’Ambrogio. Moreover, Passerino Bonacolsi used a clever stratagem—feigning a river crossing—to further distract part of the Bolognese forces. Under Passerino’s orders, with the professional Modenese soldiers storming against the disorganized front lines of their enemy, his cavalry attacked the Bolognese forces on their flanks.

The ensuing battle was very short, about a couple of hours, and ended with a terrible defeat of the Bolognese army. Despite their numerical superiority, the Bolognese troops—probably taken by surprise by the lateral attack—fled the field, many taking refuge inside their city’s castles. The retreat turned the battle into a rout.

Buoyed by the retreat of the Bolognese, the Modenese pushed on to Bologna, where they destroyed one Bolognese castle after another (Anzola, Castelfranco, Crespellano, Piumazzo, Samoggia, and Zola). For good measure, they also destroyed the sluice which the Bolognese used to divert water to their city.

You’d think that at this time, the Modenese army would decide to sack Bologna and be done with it completely. Instead of doing that, however, they opted for something less cruel, but equally insulting: to hold a parade outside the gates of Bologna, reenacting the capture of the oaken bucket.

After the parade, they held an athletic contest—or a palio as they are known there—which they dedicated “to the eternal shame of Bologna, and the eternal memory of those sent out on the Bolognese expedition.”

Finally, before leaving, the Modenese took 26 Bolognese hostages with them, and from a well just outside Porta San Felice—wait for it…—yet another bucket!

Yes, there really was a wooden bucket!

OK, only the story of this second bucket is definitely true! The story of the first bucket—the one that started the war—was probably merely inspired by it.

Indeed, most contemporary accounts claim that the War of the Bucket was declared because Modena had captured Monteveglio, a strategically important Bolognese castle. However, once the story of the bucket got out, it was just too good a story to be spoilt by concerns for historical accuracy.

Nonetheless, the bucket taken as a war trophy has an interesting story of its own to tell. Believe it or not, that bucket remains intact to this day and is housed at the Camerino dei Confirmati, Modena’s town hall.

At least until 1911, it was on display in the Torre della Ghirlandina, the Cathedral of Modena bell tower, where modern visitors can still see a faithful replica of the original.

Most Modenese can still quote from memory the epic’s opening verses, which—as translated by James Atkinson into English—read as follows:

Fain would I sing that direful wrath which swayed
Men’s bosoms for a bucket, spoil renowned!
Stolen from Bologna, and in pomp displayed
By hostile Modenese with conquest crowned…