Written By Becka Keeley
in History 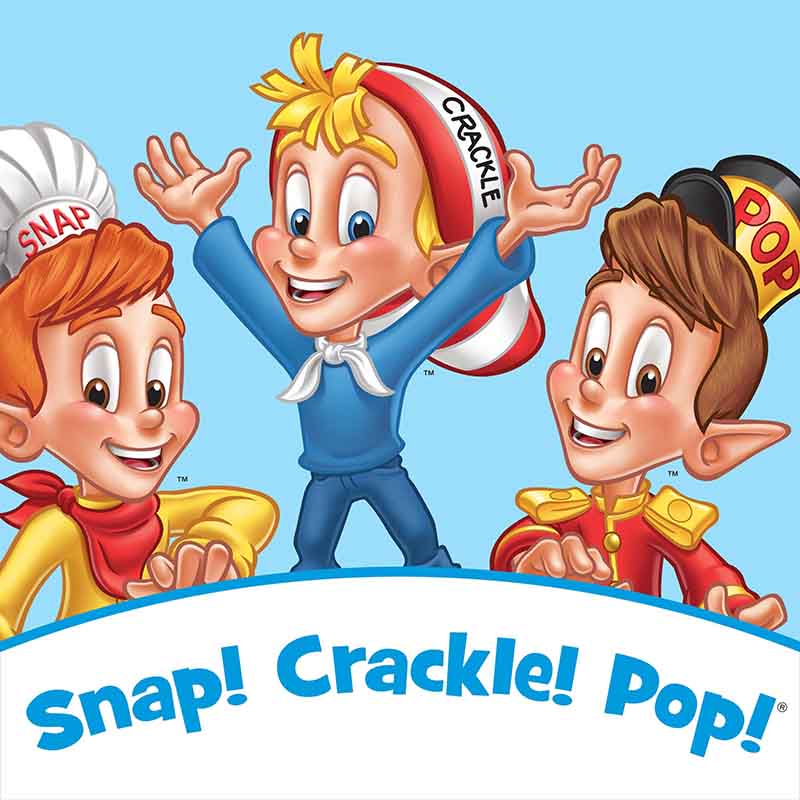 In the history of famous threesomes in brand products, none come more readily to mind as Snap, Crackle, and Pop. The characters behind Kellogg’s Rice Krispies cereal have stood the test of time and continue to promote the cereal to new consumers. And for a product that really has only one main ingredient in it, that’s pretty remarkable.

But did you ever wonder where and how these characters got their name?

Kellogg’s Rice Krispies was first introduced to the American public in 1928. Marketing executives (and the discerning public) soon noticed the cereal made a particular sound when added to milk. The sound was used as a selling point for the first time in 1932, in a radio ad developed by the U.S. ad agency N.W. Ayer. The radio ad aired during a program called The Singing Lady—unsurprisingly, sponsored by the Kellogg Company—thought to be America’s first radio program for children. The ad enticed young listeners with the line “If you’ve never heard food talking, now is your chance.” What child wouldn’t want to hear their food talk?

Sadly, the copywriter who initially coined the line “Snap! Crackle! Pop!” remains unknown to this day.

The words “Snap! Crackle! Pop!” first appeared in the product’s artwork later the same year. The following year, in 1933, the first character made its debut: Snap, wearing the now-familiar baker’s hat and holding a wooden spoon. The small illustrated gnome was soon joined by Crackle and Pop. The Snap, Crackle and Pop gnomes, drawn by illustrator Vernon Grant, were initially used in ads and posters but soon started to appear on the side and back panels of the cereal box.

It was Grant who approached the Kellogg’s ad agency, N.W. Ayer, in 1933, with his illustration of three gnomes—Mr. Snap, Mr. Crackle, and Mr. Pop—to market Rice Krispies. His idea was immediately approved, and his talents were used up to 1941. (And, in case you were wondering, he was paid handsomely for his work: up to $250 thousand.) In addition to drawing the characters, Grant illustrated nursery rhyme stories, which were added to the cereal packaging. These stories were so successful in marketing the product that the company decided to add coupons to the cereal box, which families could cut out and mail in to receive full-color detailed story and song booklets, stickers, prints, “stuffy dolls,” and more, all of which were illustrated—yes, you guessed it—by Grant. And so began the tradition of cereal box giveaways and promotional merchandise (regretfully, not as common today).

From Gnomes to Elves

Snap, Crackle, and Pop were initially drawn as elderly gnomes, with large noses, ears, and hats. In 1949, the characters received their first major makeover: they became younger, they had smaller hats, and their large features were minimized (though they kept the long ears!). Since then the characters have been redrawn by a number of commercial artists including Don Margolis and Ted Carr.

Though the three characters we know and love today have undergone other makeovers over the years, they are immediately recognizable: no doubt a child growing up in the 50s would recognize the characters as they appear today. Snap (the original, and therfore the oldest brother) always wears a baker’s hat and a red scarf around his neck. Crackle (the middle brother) always has a red-and-white striped cap, and Pop (the youngest) wears a shako or military hat. And in case you forget, you can always read the names emblazoned on their hats.

In case you thought the characters were “just another pretty face,” they can sing too! Since making their television debut in 1959, Snap, Crackle, and Pop have sung jingles in both black-and-white and color animated TV ads.

In the 1950s, the famous trio were joined by a fourth character named Pow, short for “power.” Appearing in only two TV commercials, Pow—unlike Snap, Crackle, and Pop—didn’t represent one of the sounds coming from the cereal: his purpose was to promote the nutritional value of the whole grain rice. Also unlike the three brothers, he wears a spacesuit and flies on a hovering spaceship–like aircraft. According to the ad: “Pow doesn’t say much, he just does things.” His brawny form (he is taller than the other three) lends credence to this claim.

The astronaut-elf appeared at the start of the space craze, during an increasing preoccupation with space exploration and technology. Though the world’s fascination with space and technology didn’t end, Pow’s time with Snap, Crackle, and Pop, sadly, did. But perhaps Kellogg’s wasn’t wrong to cut him out of the family picture: after all, “Snap, Crackle, Pop, and Pow” just doesn’t have the same ring to it.

Snap, Crackle, and Pop Around the World

If you think these three sprites—who even have their own Wikipedia page—are famous only in North America, then you are mistaken. In fact, their popularity extends beyond English-speaking audiences.When the snap, crackle, pop cereal was marketed to other countries, naturally, the company wanted to keep these loveable characters and the sounds they symbolize. But direct translations of “Snap! Crackle! Pop!” aren’t always satisfying: in German, it would be “Zerbrechen! Knistern! Aufplatzen!” and in Spanish, “Chasquido! Crepitar! Taponazo!” Not exactly jingle material.

So when the cereal was sold in foreign markets, Kellogg’s opted for onomatopoeic sounds for the snap crackle pop slogan that made sense for that country, rather than direct translations. And, I’m sure you’ll agree, they’re just as satisfying to say out loud as “Snap! Crackle! Pop!”:

But How Exactly Does Rice Krispies Make That Sound?

Grains of rice don’t “snap, crackle, and pop” on their own, but during the manufacturing process, the grains are steamed and then oven-popped (much like popcorn), expanding the rice and creating air pockets or tunnels inside each grain. Adding milk to the puffed rice puts pressure on the air inside the pockets, resulting in the distinctive sound. The longer the cereal stays in the milk of course, the soggier it gets, which—much to the chagrin of children everywhere—leads to the sound discontinuing after a while.

Though over 85 years old, Snap, Crackle, and Pop have retained their boyish looks and don’t seem to be going away anytime soon.

They continue to be featured in TV ads and other promotional material introducing both the cereal and the elves to new generations of children.