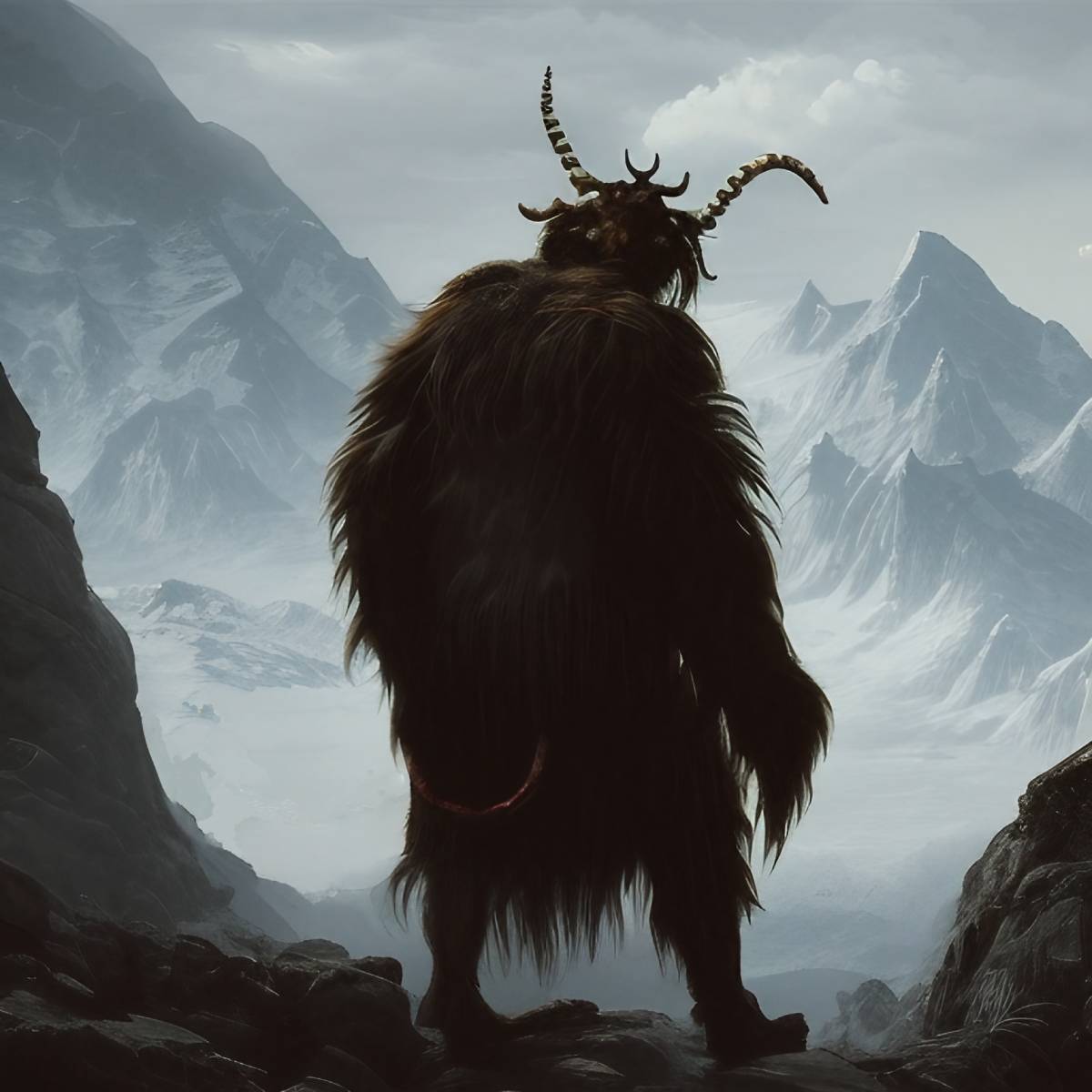 A painting of Krampus with the Alpine mountains in the background. For hundreds of years, just before they are visited by Santa, children in the Alpine regions of Germany, Austria, the Czech Republic and Slovenia have to ride out the coming of his dark companion—a long-tongued goat-like demon from Hell known as Krampus. (© Odd Feed)

The Alpine Region of Central Europe is well known around the world for its cozy, magical Christmases. Snowy landscapes, little nativity scenes, Glühwein and Christmas Markets: every year thousands of tourists flock to Germany, Austria, the Czech Republic and Slovenia to experience the true meaning of Christmas.

But taking place in early December, before the bulk of the tourists arrive, is an altogether more ancient and sinister tradition. December 5th belongs not to Santa or the Baby Jesus, but to a bizarre-looking creature called Krampus—an evil demon who punishes naughty children by beating them with birch sticks before whisking them off to Hell.

This is his fascinating story.

Krampus, the pagan gift-bringer who punishes naughty children on Christmas

The story of Krampus has its roots in pagan mythology, and is probably older than Christmas itself. In fact, originally, Krampus was probably just another midwinter gift-bringer with dual nature, both benevolent and malicious. Zwarte Piet in the Low Countries, La Befana in Italy, Père Fouettard in France, and the Yule Cat in Iceland are just a few of the numerous similar mythological figures quite prevalent in European folklore.

However, after the Christianization of Europe—as the Catholic Saint Nicholas of Myra became the principal all-benign Christmas gift-bringer—Krampus’ malicious side got emphasized. But rather than disappearing altogether from the collective imagination of Central Europe, he got associated with the festive period and became the last thing anyone would expect: Santa’s dark companion.

Saint Nicholas and his partner from Hell

Half-goat, half-demon—and sometimes associated with the Christian devil—Krampus arrives on Earth on the night of the 5th of December, wearing bells and chains, and carrying a bundle of birch sticks. He is usually drawn with cloven hooves, sharp, curling horns and wild, dark hair, and may also have fangs and a long lolled-out tongue. His name comes from the German word Krampen, meaning “claw.”

Though there is a misconception in North America that Krampus is Santa’s archnemesis, the two are actually associates, with Krampus acting as Santa’s foil. Put otherwise, whereas Santa’s role is to reward the good children, Krampus’ job is to punish the naughty ones for their wrongdoings, by beating them with his birch branches.

Together, the two make up a kind of good cop-bad cop duo, making sure that Alpine children have just enough motivation to stay off the naughty list. The logic seems sane enough: if the promise of a gift doesn’t do it, the fear of the birch just might! However, in some versions of the legend, Krampus takes things a step further: he puts the naughty kids in his bag and takes them away with him to Hell.

Though the character of Krampus is incredibly old and has been celebrated in Alpine towns for hundreds of years, his popularity began to expand in the late 19th century thanks to the phenomenon of Krampuskarten, Krampus cards. Though Christmas cards today usually feature nothing more frightening than a snowman or a robin, in fin de siècle Austria, it seems like their goal was to leave recipients with an uneasy feeling of fear, disgust or confusion. (Not that Victorian England was any different.)

Krampus became such a common motif on Christmas cards at the turn of the 20th century that Krampus Cards became a genre of their own. These festive images of the demon punishing evil children by beating them with sticks, chaining them together in lines or throwing them in a sack to be taken to the underworld brought the character of Krampus out of the mountains and down into the German cities, from whence word would eventually spread across the world.

Krampusnacht: the night of the demon

Krampus has his time to shine on Krampusnacht, or Krampus Night, which falls on December 5th. Traditionally, on this night children leave one of their shoes on the windowsill to be filled with small gifts of candy from Saint Nicholas. Children will often prepare for the visit by cleaning their room and polishing their shoes. Their parents might also encourage them to do a few extra chores during the day in order to prove to Krampus how good they’ve been year-round.

However, if this isn’t enough, misbehaving children will receive a beating from Krampus and a birch branch in their shoe instead of a festive treat. If the kids survive the evening of December 5th, they are then allowed to celebrate Nikolaustag, or Nicholas’ day, on December 6th, when they get to enjoy the present that has been brought to them by Saint Nick.

Krampuslauf: where the Krampus runs

Though kids in Germany and Austria today still receive gifts from Saint Nicholas on December 6th, Krampusnacht is now generally celebrated more by adults than children. Krampuslaufen—or The Krampus Run—has become a popular annual tradition among young adults, and, like Mardi Gras or Halloween, is often used by young men and women as an excuse to dress up and party.

During the Krampus Run, young men dress up in masks and costumes and carry birch branches and chains to embody the devilish entity from folklore. They form a parade: running and screaming and dancing through the streets. The festival atmosphere of the Krampus Run brings a lot of spectators, and many towns bring out food and drink stalls, so both runners and onlookers alike can indulge in the excesses of the Christmas season.

Despite its current name, the Krampuslauf may have originally had nothing to do with Krampus. Historians trace its origins to the widely practiced pagan tradition of chasing away the ghosts of winter. Dressed up in masks and costumes, revelers would come down from the mountains before the start of winter to do harm to the townsfolk; then, they would be ritually driven out by them. In Austria, the practice of scaring away winter ghosts by wearing terrifying costumes goes back over 1500 years!

Krampus probably entered Catholic Christmas traditions by way of new converts who wanted to retain some of their pre-Christian culture. This was achieved despite the best efforts of the Catholic church to ban Krampus celebrations as devil worship.

Another more successful attempt to eliminate Krampus from German Christmases took place a few centuries later, when the Protestant Church began to take hold in Northern and Central Germany, where though less common, Krampusnacht celebrations were still sometimes observed. Martin Luther himself discouraged German Protestants from celebrating both Saint Nicholas and Krampus, arguing that it should be the Baby Jesus who delivered gifts to the kids. This tradition stuck, and Baby Jesus—or the Christkind—is still the equivalent of Santa Claus in some areas of Central Europe.

The final attempt to ban Krampus was undertaken by the Nazis in the 1930s and 40s. They disapproved of the character, arguing that he was Catholic, Pagan and Communist all at the same time. So outraged was Hitler by Krampusnacht festivities, that anyone seen dressing up as said demon on the 5th of December was at risk of being arrested and executed.

Despite the attempts of two different Christian denominations and the Nazi party itself to do away with the Krampus spirit, the figure has continued to be a recognizable part of Alpine Christmas traditions, and has even experienced a revival in popularity in recent years. This is due to a renewed interest in folk traditions in Germany and Austria, and a slew of festive horror movies made all over the world which feature Krampus as the main villain.

Since the late 20th century, Krampus has become incredibly well known across North America due to his prevalence in pop culture. He was brought to the attention of the American masses when designer Monte Beauchamp published a collection of Krampus cards with his own highly dramatic version of the Krampus story. And then, Krampus Runs began to take place all across the United States, with Chicago proclaiming itself America’s Krampus Capital.

It’s not only books and Krampuslaufen that have made the figure popular abroad. He is now known for his appearances on screen in horror movies such as Krampus and Krampus Unleashed. Like centuries of bad children in the Alps, the naughty children of America may now learn to fear Krampus too, either from a festive Scooby-Doo episode, or via Dwight from The Office, dressing up as Belsnickel—a Krampus-inspired monster from South Germany celebrated among the Amish as well.

With modern Krampus having achieved such fame, some argue that he has become too commercialized. Additionally, some Central Europeans don’t like seeing American versions of Krampus on the big screen, as they think it trivializes their centuries-old tradition.

That may as well be true. It cannot be denied that Krampus has gone a long way over the years. Beginning in German pagan celebrations of the winter solstice, he was turned into a cautionary tale to bad children by Roman Catholicism, and has now become an American horror movie trope, as well as an excuse for teenage partying. It remains to be seen whether Krampus will be a long-lasting feature of American Christmases. In the meantime, he will likely continue to terrify naughty Alpine Children, just as he has done for thousands of years.