Cheer or Fear, Belsnickel is here! 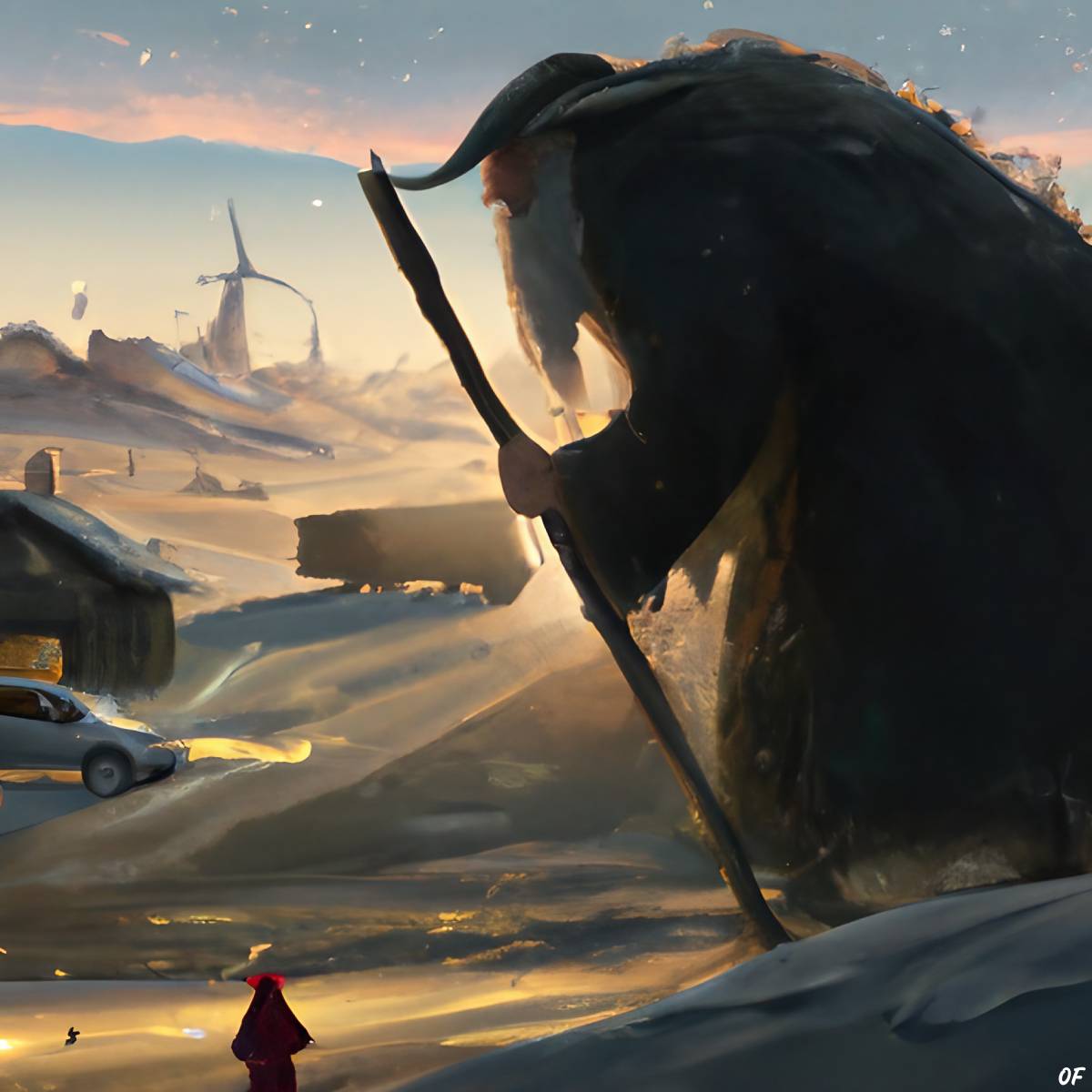 It’s Western Germany in the 19th century, and the snow is falling steadily outside. It’s nearly Christmas, and the children are squirming by the fire with a mix of fear and excitement as they await a visit from Belsnickel. He comes at night on December 5th, dressed in ragged furs, and raps on the window with his cane. If the children can prove that they’ve been good, there’ll be sweets and nuts for their reward. If not… well, then they better hide!

“Belsnickel!?” I hear you shout. “You mean from that episode of The Office?” Well, yes, but of course the TV show didn’t invent Belsnickel! Originating in medieval German folklore, he has a long and fascinating history, and has recently found new fame in the United States as a celebrated part of Pennsylvania’s Dutch Christmas tradition.

The Many Faces of the Anti-Santa, Saint Nicholas’ Faithful European Sidekick

When we look at Christmas traditions across Europe, we quickly find that it’s not all sugar, spice, and everything nice. While naughty children today might worry about not getting any presents from Santa Claus, it seems that parents in previous centuries were much—much!—more creative with their threats to keep their kids on the strait and narrow.

Take Iceland, for example. Rather than Santa, they have Jólakötturinn, a monstrous cat who eats children who don’t have new clothes at Christmas. In France, there’s Père Fouettard, a spiteful old man who whips mischievous children into submission with a stick in one corner of the room, while Saint Nicholas rewards the good ones in the other.

In Germany, Santa’s most faithful companion is a figure called Knecht Ruprecht whose job is to find out whether children have been good or bad by asking them to recite their prayers. If the children cannot recite the prayers, Knecht Ruprecht punishes them by hitting them with a stick—or even his heavy sack of ashes!

Little to the south, in the Alpine regions of Central Europe, you might run into another of Saint Nicholas’ singular sidekicks: Krampus, an evil half-goat half-demon creature who carries misbehaving children away in his sack. Finally, in Italy, there’s a coal-sharing, broom-whacking Christmas witch named La Befana—who, in all fairness, is mainly a benevolent witch, but is a witch nonetheless!

Belsnickel has a lot in common with all of these festive boogeymen, conjured up to scare children into behaving well. But don’t let his looks fool you: he also has a softer side, one that differentiates him amply from Jólakötturinn and Krampus, and makes him more analogous to La Befana.

First of all, as opposed to being an evil supercreature, Belsnickel is very much an ordinary human being, though a particularly ragged one, dressed in dirty clothes and tattered furs. To add an element of creepy mysticism, Belsnickel is often portrayed wearing a mask or deer antlers on his head, much like a wendigo in pop-culture representations.

He is sometimes even said to have a monstrously long tongue, suggesting that there may be something about him that is not quite human. In one hand, he carries a long hazel switch or cane, which he uses to beat naughty kids into changing their behavior, while in the other, he carries a sack of candies, cakes, and nuts with which he rewards their kinder peers.

Belsnickel Night falls a few weeks before Christmas, usually on December 5th. The disheveled man dressed in furs passes through the village until he reaches a house where jittery children impatiently anticipate his visit. He taps on the window with his cane and is invited in by one of the parents. Now it’s time for the kids to prove they’ve been good, hoping to receive presents from this crotchety Anti-Santa.

At this point, Belsnickel Night can differ from house to house. In some sources, it’s suggested that Belsnickel has been watching the children all year long, and already knows who’s been good or bad (think: “he sees you when you’re sleeping, he knows when you’re awake…”) In other households, the children are called upon to tell Belsnickel the good deeds they’ve done throughout the year and attempt to justify the times when they misbehaved.

Another common element of Belsnickel night is the visitor throwing candy and nuts on the kitchen floor and telling the delighted children to wait before picking them up. All the greedy children who can’t help themselves from diving in to stuff their faces are punished by Belsnickel’s cane, whereas their patient brothers and sisters are allowed to pick them up when the old man is satisfied with their self-restraint, and sure that they’ve been good.

What’s in a name: the etymological origins of Belsnickel

The legend of Belsnickel originated in the Palatinate region of Southwestern Germany. While his precise origins are unknown, most scholars believe that Belsnickel may have been conceived as a combination between an older, more pagan variant of Santa (such as Krampus or Knecht Ruprecht) and the Christian Saint Nicolas. This notion isn’t far-fetched at all, and can be attested in the etymology of his very name.

Namely, Belsnickel translates quite straightforwardly to “Fur-Clad Nick,” with Nickel being a diminutive of the name Nicholas, and Bels probably an American corruption of the more authentic Pelz, the German word for “fur,” or “pelt.” Indeed, in Germany, Belsnickel is more commonly known as Pelsnichol or Pelzmärtel, wherein “Märtel” is a Franconian form of the name Martin, and refers to yet another European Santa Saint, one who brings gifts as early as November.

However, Bels needn’t be a linguistic novelty, as it may derive from the Western Middle German verb belzen, which roughly translates to “to beat, to whip, to flog.” In fact, this is almost just as likely, as Belsnickel is traditionally known for his strictness and for punishing naughty children. If that’s the correct etymology, then another connection becomes obvious—that between Belsnickel and Père Fouettard!

The evolution of Belsnickel and his dual nature

The two etymologies of Belsnickel seem to complement each other quite well, thereby painting a vivid portrait of the original Belsnickel: a frightening pelt-clad figure who pelts naughty children. But as the folklore and traditions surrounding him evolved over time, so did Belsnickel himself.

It’s very likely that he may have been, for some period, the all-evil associate of the all-good Saint Nick, just like, say, Krampus. An 1853 article in Notes and Queries makes the similarity between the two quite obvious. Writes the pseudonymous author,

If the children have not been good during the year previous, instead of finding sugar-plums and other presents in their stockings on Christmas morning, they discover therein a birch-rod. This is said to have been placed there by Pelsnichol, or Nicholas with the fur, alluding to the dress of skins in which he is said to be clad. Some make Pelsnichol identical with Krishkinkle, but the more general opinion is that they are two personages, one the rewarder of the good, the other the punisher of the bad.

In time, however, Belsnickel (very much unlike Krampus) became a gift-bringer too. For a while, his dual nature may have been mirrored in his uniform too, as he seems to have had a much more androgynous look at the end of the 19th century, being usually portrayed by a male villager dressed up in female clothes. For that reason, he was sometimes known as the “Christmas Woman”!

Nowadays, however, he is almost exclusively a man, and kind of an obvious cross between Saint Nicholas and Krampus—a dual-natured character that can be both menacing and generous. He may still carry a stick and a bag of coal, but now he also brings treats, such as candy and small toys. He may even give out apples and oranges as presents, for the good kids of course. And all this has a lot to do with the fact that Belsnickel, well, immigrated.

From Germany to America

As you might have already guessed, Belsnickel isn’t widely celebrated in Germany in the 21st century, but that’s not to say that his legend isn’t alive and well. On the contrary!

By the time of his decline in the Palatinate in the late 1800s, Belsnickel had already moved overseas, to the United States, together with thousands of minority religious believers from German-speaking Europe. This group would later go on to become the Pennsylvania Dutch. They have kept the character of Belsnickel alive to this day.

Today, this is the community with which Belsnickel is primarily associated. As the Pennsylvania Dutch have become more interested in celebrating and reviving aspects of their German heritage, Belsnickel too has had somewhat of a revival in recent decades.

Every year, this notoriously reclusive society opens its festive celebrations for one day, as the Pennsylvania German Culture and Heritage Center hosts a Christmas on the Farm in Kutztown. Belsnickel never fails to make an appearance! After having him almost to themselves for over 100 years, the Pennsylvania Dutch now share Belsnickel with the rest of the world.

I already knew all of this, I’ve seen “Dwight Christmas”!

Of course, you might have already been familiar with Belsnickel if you’ve seen part two of Netflix’s The Christmas Chronicles, in which—spoiler alert—Belsnickel is the main antagonist, embarking on an “anti-Claus vendetta” against Kurt Russell’s Santa and Christmas itself. Beware, though—other than his name, this Belsnickel has very little in common with the original one!

What about that iconic episode of The Office, “Dwight Christmas,” in which Dwight Shrute dresses up as the character for his “authentic” Pennsylvania Dutch office Christmas party? Well, we’re happy to say that Robert Padnick, who wrote the episode, truly nailed Belsnickel’s look! Dwight looks great with his fur coat, dirty face, and hat covered in leaves and twine!

Unfortunately, though, some artistic liberties were taken here too. We’re sad to report that there isn’t any evidence that Dwight’s catchphrase “Cheer or Fear, Belsnickel is here!” has any genuine precedent, and neither do the labels “impish or admirable”—though we’re sure those wouldn’t be the things your children would complain about the most if you decided to stir up this holiday season by dressing up as Belsnickel, and bringing a little bit of the Christmas spirit of old Europe to your modern day Christmas celebrations!