Written By Bethany Trigg
in Culture 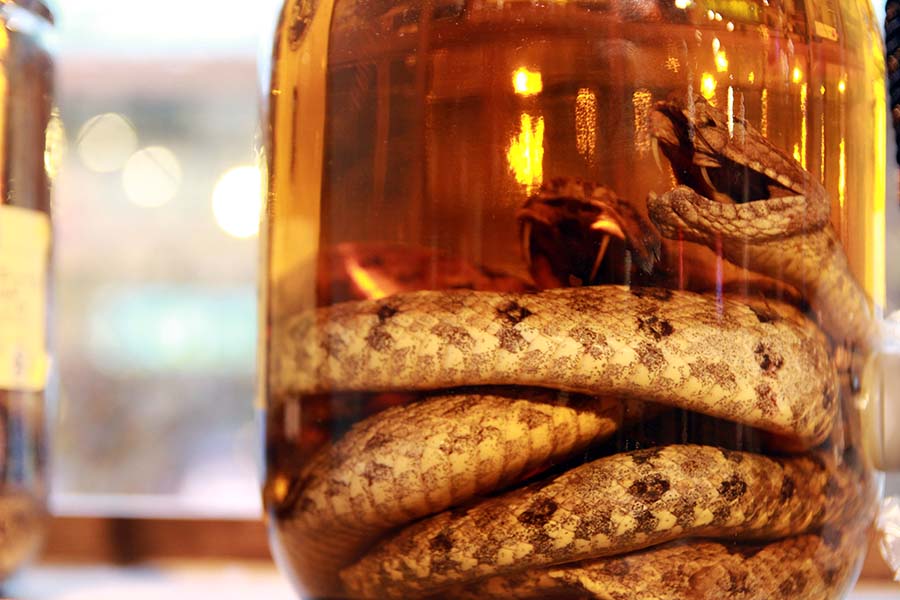 Are you afraid of snakes? Well, if you are, you may want to give this Japanese spirit a miss.

What is Habu Sake?

Habu sake, also known as habushu and Okinawan Snake Wine, is an alcoholic beverage originating from Okinawa in Japan. However, what sets it apart from regular spirits is that a snake is submerged inside the bottle.

The snake inside the Habushu is called Protobothrops flavoviridis – also known as the pit viper snake or the habu snake.

How is Habu sake made?

The process of making Habushu requires putting the habu snake into a bottle full of alcohol. There are two main production methods – both of them extremely cruel, unfortunately.

The first of the production methods involve the snake being put into the bottle of alcohol while it is alive. This drowns the snake, and then the rest of the distillation process occurs.

The second method is a bit more gruesome. The snake is essentially knocked out by being put on ice for a few hours. It is then cut open, its internal organs removed, and then sewn back up and put into the bottle of alcohol. Yep, it is still alive while all of this is happening. The snakes wake up when they are in the liquor bottle; they begin to strike aggressively but die quickly. Most producers are looking for the snake to do this, as it dies in a more interesting pose and makes the bottle of Habushu look more appealing. Another reason why producers of Habushu will take out the intestines of the snake is to prevent the beverage from having quite a bad smell, which is what can happen if the snake is drowned in the bottle without being gutted.

Some Habushu producers do not sell their alcohol with the habu snake inside; however, this is not common.

After the habu snake is inside the bottle, it soaks in a pure ethanol bath for a month. This process completely preserves the snake, turns it white, and renders the snake’s venom harmless. After a month of soaking, the snake is put into a mixture of 59% alcohol for forty days and then put into a mix of 35% awamori. Note that Habu sake is yellow because honey and herbs are added. The addition of honey also makes the liquid taste slightly sweet.

Awamori is a type of spirit made only in the Japanese prefecture of Okinawa. It is the oldest distilled alcohol beverage in Japan, at over six hundred years old, and since the Ryuku Kingdom in 1429, it has been Okinawa’s official beverage.

Like other Japanese alcoholic beverages like sake and shochu, awamori uses rice. Awamori distillation uses a similar process to shochu. Awamori is made of black rice mold, and a specific type of long grain rice called Indica rice. Indica rice demand is so high in Okinawa that the prefecture cannot grow enough to meet demand. Indica rice is imported from Thailand to meet production needs.

Awamori only requires one fermentation; the flavor is mellowed and enhanced by being aged in traditional clay pots. This means that the taste of awamori is slightly sweet.

How do you drink Habu sake?

Awamori can be served in a variety of ways. Traditionally it is served in Okinawan restaurants with ice and water and should be mixed with water at a ratio of three parts alcohol, seven parts water. Lemon can also be added to enhance the natural taste of the beverage. When served straight, awamori is put into a karakara, a small serving bowl, and then poured into a choku, a small cup.

Despite its scary appearance, Habushu is as safe to drink as any other alcoholic beverage. There is no snake venom in the drink because when the habu snake soaks in ethanol, all venom is destroyed. If there were any venom in Habushu, it would be a rather terrible experience for the drinker. The pit viper venom causes problems that range from milder nausea and stomach upsets to hypotension and death.

Read more: The Deadliest Caterpillar On The Planet – Lonomia obliqua

You may be wondering why anyone would want to drink something that looks so terrifying. Habushu is thought by many in Japan and other countries such as China, the Philippines, and South Korea to have medicinal properties, chiefly that it will help increase a lagging libido. Habu snakes have rather intense mating sessions, sometimes lasting over twenty-four hours. Superstition says that the snake’s sexual prowess is transferred into the Habushu and then into whoever drinks it.

Can you buy Habu sake outside of Japan?

If you want to indulge in some habushu, your best chance of getting some is in Okinawa itself. The alcohol can be found listed on places like Amazon but tends to sell out quite quickly. Getting the spirit into other countries can be a bit difficult as well. For example, suppose you want to bring some habushu to the United States. In that case, you will find it is subject to U.S. Fish and Wildlife Service regulations, and therefore needs to be inspected – possibly meaning it is detained – before you are allowed to take it home with you.