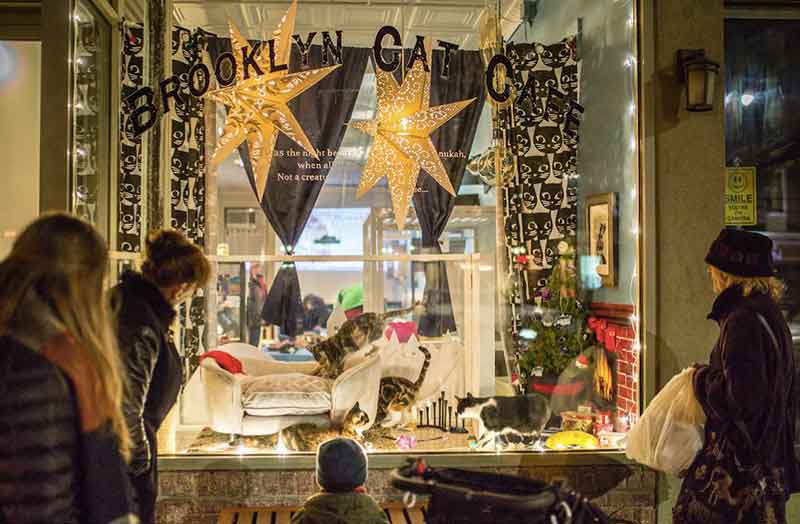 The Brooklyn Cat Cafe is a peculiar cat rescue organization in New York City where orphaned kittens are cared for by rats. (Photo: theodysseyonline)

Ever heard of the expression ‘when the cat’s away, the mice will play’? Well, it definitely doesn’t apply to the incredible coexistence of caring rats and helpless kittens happening at the Brooklyn Cat Cafe, an unusual cat rescue facility in New York City.

The Brooklyn Cat Cafe is the only café and feline adoption centre in Brooklyn Heights, run by the non-profit Brooklyn Bridge Animal Welfare Coalition, where cat enthusiasts can come to play with and adopt some of the kittens or cats that live there.

But how did it all start? Well, two years ago, Ebony, an orphaned 4-week-old kitten was diagnosed with feline leukemia. Since staff didn’t want Ebony to infect other cats, but didn’t want her to spend her life alone either, they found a white rat who needed home and could keep her company without getting the disease.The two developed a special bond that would last until she died at 4 months old. Her life might have been short, but it was so much richer thanks to Ivory. Ivory went on caring for other poor kittens until he died of old age a few months ago. 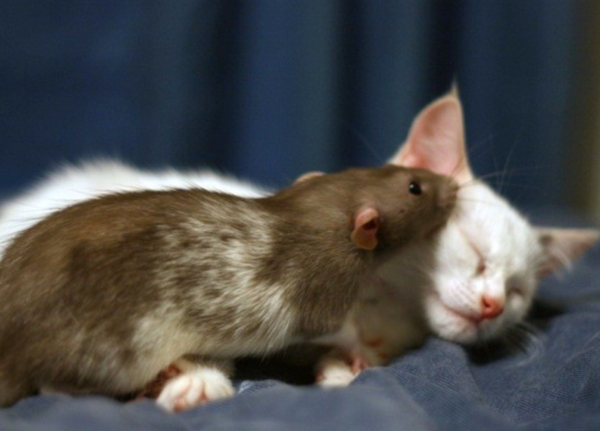 The café’s website says only the best of Ivory: “He had always shown such kindness to all creatures – kittens (however obnoxious) and humans. He’s been a role model for all of us – practicing tolerance and love of all creatures.”

Inspired by this beautiful experience, the cat café adopted Remy and Emile from the small animal rescue group Helping All Little Things. The rats spend time with small kittens, younger than 8 weeks old, who are separated from other cats until they can be vaccinated.

Since they are exposed to smallballs of fur from their young age, the rats aren’t afraid of kittens who don’t hunt them, because they are both too small and well fed. The cats are, however, not always aware that the rat tails are not something that’s there for them to play with, but Remy and Emile are okay with this as long as the kittens are as gentle with them as they are with the kittens. If the kittens have a mother, the rats are allowed to play with them only under close supervision, but if they are orphaned, Remy and Emile are more than happy to step in and help raise the little ones.

Read more: The Deadliest Caterpillar On The Planet

This setup not only benefits the kittens, but also shows visitors that rats don’t always have to be the bad guys.

“People don’t realize how smart and sweet [rats] are”, says Anne Levin, BBAWC Executive Director. “Emile rolls on his back and I can tickle his tummy. They make a purring/clicking sound when I rub their face and nose and they love to cuddle and know when it’s evening time and they get their snacks and cuddles.”

Like to lend a paw? The Brooklyn Cat Cafe have a donation page detailing how you can help them continue their work.