The History Behind the Pan African Flag

The Pan African Flag with its red, black, and green bands was created by the members of the Universal Negro Improvement Association founded by Marcus Garvey in 1920. (Photo: Wikimedia Commons)

With the Black Lives Matter movement and its demonstrations making the news, it is easy to forget that Black nationalism and pride has been around for decades. One example of this is the Pan African Flag. Created a century ago, the flag is still as relevant today as it was back then.

Origin of the Pan African Flag

You may ask, How can there be a Pan African Flag when Africa isn’t a country? The idea of a Pan African Flag originated with Marcus Garvey. He first considered the concept after hearing a 1900 song which mocked the lack of a flag unifying Black people. The offensive song was titled “Every Race Has a Flag But the C**n.”

Born in Jamaica in 1887, Marcus Garvey was a political activist who helped shape the civil rights movement in the US. He founded a branch of the Universal Negro Improvement Association (UNIA) in New York and fought to end the European colonization of Africa. He wanted greater unity between Africans and people of African descent: he was an advocate of the Back-to-Africa Movement, which many civil rights activists found alienating.

Garvey felt that a shared flag would help give African people, and all people of African descent, a unity and pride they currently lacked. In August 1920, during a UNIA meeting led by Garvey, a Pan African Flag was created.

Read more: What Is Juneteenth?

Colors and other names of the Pan African Flag

The UNIA members chose red, black, and green arranged in a tricolour horizontal banner. These specific colours were chosen as each represented a different aspect of what it means to be African. Red was chosen to represent the ancestry Africans share through their blood. Black represents Black people. Green was used to represent the wealth of Africa’s natural resources.

Created a century ago, the flag still has importance today. The flag has assumed many names since its creation, including the Black Nationalist Flag, Black Liberation Flag, and Afro-American Flag. During the US civil rights movement in the 1960s, the flag gained in popularity. The flag symbolized pride in having African ancestry, something that was viewed by society as a hindrance.

Modern uses of the flag

The flag has played a big part in modern protests. It was most noticeable during the 2014 protests against the fatal shooting of Michael Brown by police. The flag has also been used in modern media, playing a strong part in the design of the 2018 superhero film Black Panther. Many of the costumes use colors from the Pan African Flag. The character of T’Challa, the Black Panther, is often seen wearing black. His royal guard wears a uniform of predominantly red, whereas the River Tribe are given costumes of green. 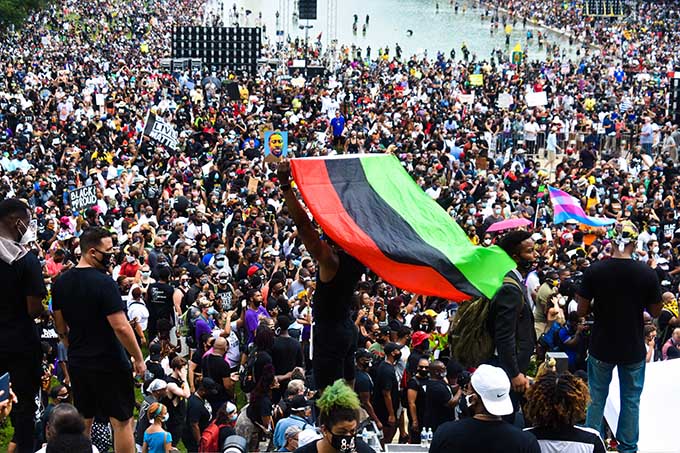 Although the 1900 song mocked the African nations for lacking a unifying flag, a century later they, in fact, have two. The first flag was created by Marcus Garvey. The second was inspired by the Ethiopian flag. Ethiopia is held as a symbol of strength on the African continent. It is one of only two countries that preserved its sovereignty during Europe’s colonization period in the late 19th and early 20th centuries.

Italy did attempt to colonize the nation in 1894. Despite sending a sizable army of 20,000 men, Italy was no match for the 200,000-strong Ethiopian army. However, Ethiopia was briefly occupied by Italy during World War II.

Many African countries celebrated Ethiopia’s legacy when they created their flags after gaining independence. Ghana was the first to adopt the colors of Ethiopia’s flag when it gained independence in 1957. The Ethiopian color scheme of red, gold, and green were used. Almost all sub-Saharan African countries have also adopted this color scheme, including Cameroon, Mali, Senegal, and Benin.

The idea of a Pan African Flag as a cry of unity is still a strong symbol in the world today. Walk through any African-American neighbourhood and most likely you will see a Pan African Flag proudly on display. For many, the flag represents an identity that goes beyond their “Americanness.” The Pan African flag allows Black people to feel proud of their ancestry and heritage, necessary especially in a country founded on the enslavement and exploitation of their ancestors.

Lethologica: The Word That’s on the Tip of Your Tongue