Written By Lianda Martin
in Life 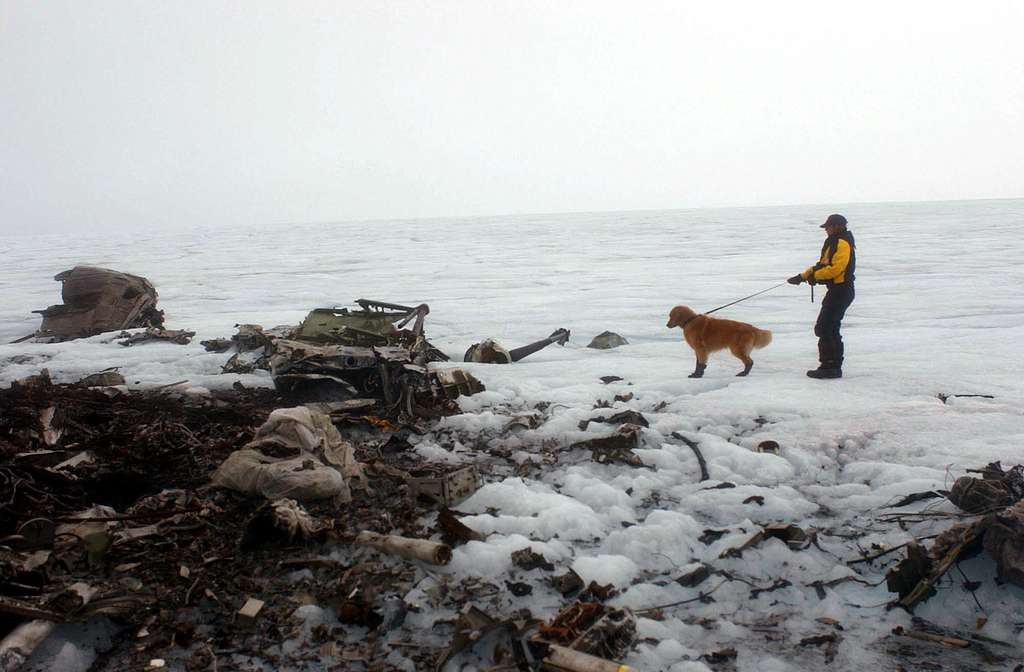 A volunteer from Bucks County Search and Rescue, and cadaver dog Tucker, search the wreckage of a Navy P-2V Neptune aircraft that crashed over Greenland in 1962. (Photo: Picryl/US Navy)

It started with the wolf

Canines have been our natural companions since the beginning of human civilization. The date when the wolf was domesticated, and exactly how it happened, is still disputed.

By 11,000 BCE, one could distinguish several dog lineages in the Near East, New Guinea, the Americas, and Northern Europe that later became individual breeds from Teacup Poodles to German Shepherds.

By 6,000 BCE, they were such an essential part of the lives of hunter-gatherers that they were often buried with their owners. We now had companion animals as co-conspirators to hunt, feast, live, and die beside.

Through human selection, each breed eventually bore specialized traits. Some became shepherds, others pest control or hunters, but nearly all excelled at tracking by following different scents.

The canine nose is hundreds of thousands of times more sensitive and, through air scenting, is far more adept at tracking targets than even the keenest hunter. They can detect a whole range of scents from mere scant traces of their objective, whether that is prey in nature or lost humans.

So it should come as no surprise that trackers in the modern era frequently bring dogs into the field. They helped to track down evidence, escaped criminals, a missing person, or in some instances, actual dead bodies.

Today, most dogs are unlikely to be chasing anything but a squirrel or a tennis ball at the park. However, the working dog remains a part of our continuing intertwined story of life and death.

The quintessential tracking dog, the Bloodhound, was said to have come to Britain with William the Conqueror during the Norman Conquest. There were gothic horror stories of their deployment on such high profile heroes as Robert the Bruce in 1307 and William Wallace in 1395. Henry VIII bestowed 400 Mastiffs upon Charles V of Spain to use against the French in 1518.

It also was the colonists’ chosen weapon to herd or control people in the cotton, sugar, and tobacco plantations in the Americas and the Caribbean.

They maintained this barbaric association into the Victorian age, but attitudes towards their use and slavery in general changed. These dogs then became focused on law enforcement (first pioneered in the British Empire) to help prevent felon escapes, find human remains, and track down thieves.

Even Sherlock Holmes introduced us to his “sleuth hound … an ugly, long-haired lop-eared creature, half spaniel and half lurcher”. Through this widely circulated fiction, people learned that dogs could sniff out a lost scent and solve a mystery for good, not evil (long before Saturday morning cartoons re-enforced the idea).

The first formally trained dogs for formal police work began in 1899 in the British and German Empires. Frieda Schmidt made the first serious effort to understand how dogs used odor to track humans in 1900. By the 1930s, Israel was also using Dobermans for forensic tracking.

Public attitudes to tracking dogs continued to change positively through the two world wars. There are even reports of people being found or rescued by their own dogs in the aftermath of bombings. After the War, these service dogs were even used to locate war graves and identify hundreds of those previously missing in action (MIA).

Ask anyone who has lost someone they love and not been able to grieve over that person’s body. The grieving families have no chance of “moving on” until a cause of death can be determined. This was particularly acute amongst families of those MIA after the great wars.

Finding loved ones in peacetime

When it’s time to break down the door and get the bad guy, I want Jack on the attack. When my canoe capsizes, and I’m the only one, not a drowned victim, Rover can come over. When a dead child’s body is found by a Human Remains Dog (HRD) the day before the release of a suspect for lack of evidence, the parents will have Sadie by their side.

One of the first cadaver dogs in action was in Hebron in 1938. James Starkey, the eminent archaeologist, was murdered outside by bandits during the Arab Revolt. An HRD team led the police from the crime scene, through 22 km of mountainous terrain to Kharoes, and the murder weapon concealed in a wall revealing the perpetrators.

On the ground cadaver dog training

Ideal cadaver dogs are typically breeds with long noses and large nasal cavities like German Shepherds, Belgian Malinois, Labrador Retrievers, Springer Spaniels, and Border Collies and Dachshunds. Once the best candidate with physical traits is chosen, they are then tested for the temperament (relative to their breed) needed for each task.

Selected HRD dog recruits will usually train with one specified cadaver dog handler. The cadaver dogs must display a high play, food, reward drive, and intent focus. They will work together and bond for 18 months to four years before achieving certification.

During this time, they are cross-trained for successful tracking (following ground disturbance odor), trailing (following specific human scents), and search and rescue tasks. They must be agile, accurate and, full of stamina, often searching 1.32 square km (3212 ac) for days on end in search of decomposing human flesh. Finally, with the help of training aids to protect recruits, they learn to handle dangerous situations.

These super dogs go through so much more than just basic training. The dogs are trained on keeping both the dog handlers and themselves safe in times of peril. Handling stresses from crawling into confined spaces to navigating unstable surfaces in smoke-filled locations and more.

The dogs must be able to discriminate between human and animal remains. This may be more information than you need, but deceased humans pass through five stages as decomposing bodies. These include recently dead, inflation, deflation, disintegration, and skeletonization, each a step in human decomposition.

Each stage produces a characteristic mix of 480 different volatile compounds, each with its unique scent, which the dog is trained to pick up. When the dog locates scents related to the objective, he gives an alert.

Depending on how each dog was trained, they may sit, stand, or lie down with their nose pointing to the target. They might otherwise bark or just look at their handler.

All of which are signs that the dog can detect human remains nearby. Once he has mastered these feats, he can be deployed into service to do the real thing after about 1,000 hours of training.

The importance of the passive alert

There might be more evidence hiding in that leaf pile at the crime scene or lightly tread footprints in the sand that must not be disturbed. Each of the dogs must be trained to give a passive alert. This ensures cadaver dogs don’t disturb search areas or prematurely forewarn suspects.

All of this training is completed through positive reinforcement. This might include verbal praise, playing fetch, petting, and occasionally even treating good behaviour.

How do they learn the scent of human remains?

Procuring actual blood, bone, and muscle tissue plays a vital part in dog training. Unfortunately, getting corpses ethically has always historically been a problem. Every attempt to recreate the scent of human remains artificially has been unsatisfactory.

Several nations have created outdoor forensic decomposition laboratories specifically for cadaver dog training to alleviate this issue. With family consent, they use an extensive area to bury the body parts of willing participants at different stages of disintegration.

The Oak Ridge National Laboratory in Tennessee, USA, has gone one step further. They’ve even created a model scent library from these remains to maximize their utility across institutions.

The vanguard of cadaver dogs

Skilled handlers with exceptionally talented dogs will go to advanced training. This can include underwater detection and detecting cremated remains.

In 2016, six partying youngsters capsized in an overloaded canoe on Elliot Lake, Ontario. One lass drowned, and dive teams worked for 12 days without locating her body. Days later, handler Kim Cooper and three water-qualified dogs went to the search area and found her within 15 minutes.

The relationship between dogs and humans has evolved over time becoming, ever closer. In the modern era, service dogs assist the disabled, work in search and rescue, and even solve mysteries as part of the CSI team.

Today we recognize their efforts beyond throwing a few scraps of leftovers from the fire. Statues, television shows, and humble articles are a mere salute to their heroic efforts.

The Moon is Rusting and it Might be Earth’s Fault