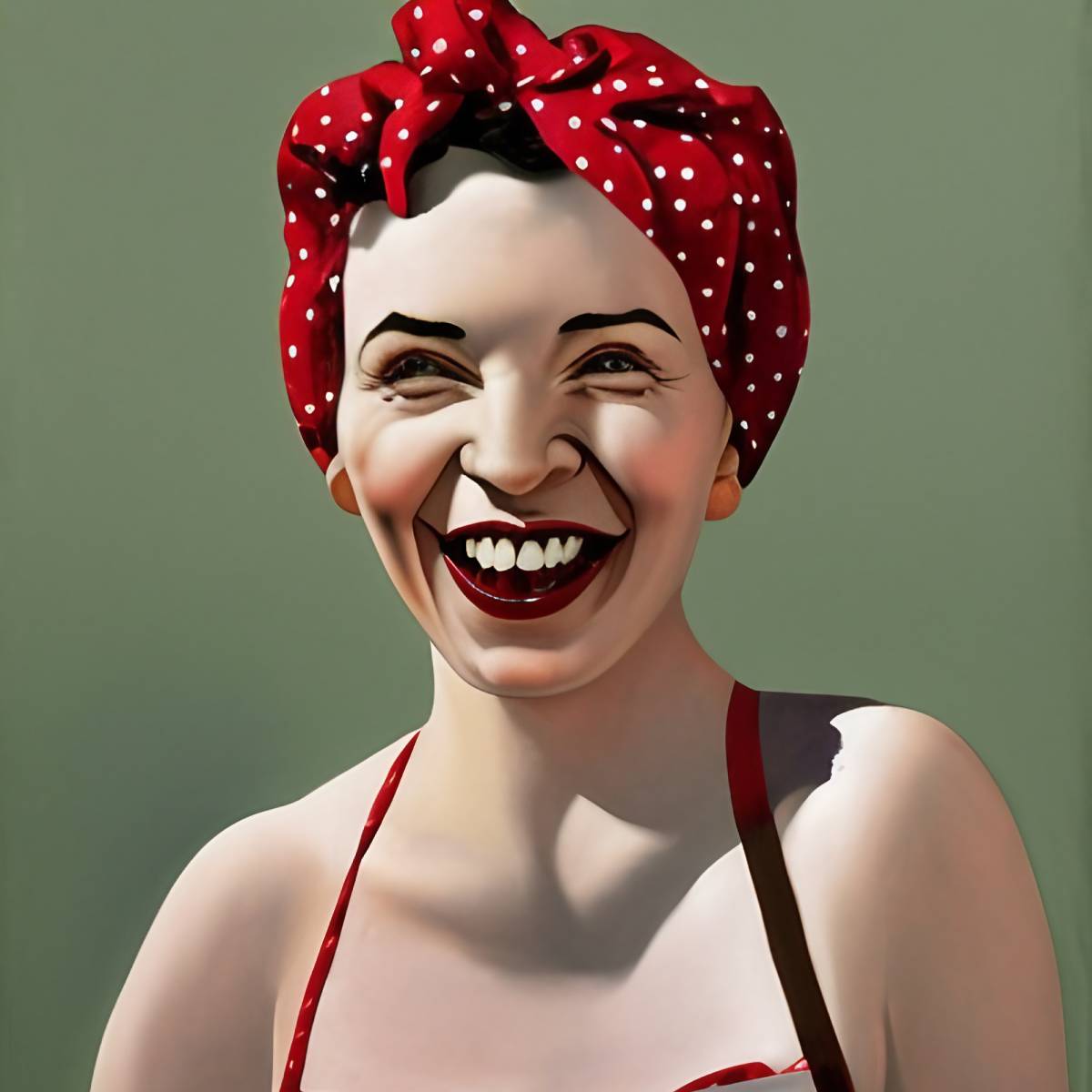 A portrait of Rosie the Riveter laughing. (© Odd Feed)

In the 1940s, with millions of American men away at war, women stepped into the breach to keep the nation’s factories and industries running. They became known as Rosie the Riveter, after the main character in a popular song of the time.

For many women, taking on war work was a chance to earn good money and to play their part in the war effort. But it was also a chance to prove themselves in what had previously been a man’s world. In the years after the war, as the men came home and the women were expected to return to their traditional roles, many found it hard to adjust; because for some, the experience of war work had opened up new opportunities and a new way of life.

But how did Rosie the Riveter get her name? Who was she? Was she based on anyone in particular? What kind of an effect did she have on the US economy, and on the tacit arrangements between the sexes? Was modern feminism born in World War II-era United States? Read ahead to find out!

American women in World War I

The origins of Rosie the Riveter can be traced back to the First World War. As millions of American men were conscripted en masse to travel to Europe to participate in the closing stages of World War I, women were asked to help at the factories. The pervasive nature of the effort meant there were simply not enough men remaining in the labor force to supply the enormous US army.

This, in turn, meant that women accepted roles that previously would have been male-dominated, such as working on the factory floor, in lumber and steel mills, in heavy construction and other industrial jobs. However, just as soon as World War I ended, women began to filter back out of the job market, as government propaganda urged a “return to normalcy.”

The “We Can Do It” poster

Just two decades after World War I ended, World War II began. Female workers were once again needed to replace conscripted men in jobs that had long been a male monopoly. And they needed a push. That’s when Rosie the Riveter was born.

In retrospect, her first appearance was probably on a poster—the now-famous “We Can Do It” poster. It wasn’t as famous at the time. Originally created in 1942 by Pittsburgh artist J. Howard Miller as part of an advertising campaign for Westinghouse Electric, it was printed in no more than 1,800 copies and wasn’t connected to the Riveter campaign until decades after World War II, more precisely the 1960s, when it was rediscovered and reinterpreted by first-wave feminists.

Even so, the “We Can Do It” poster perfectly captures the zeitgeist of the times. The bandana-clad, bicep-curling woman with rolled up sleeves and a dogged gaze wasn’t just the (literal!) poster child for work in the trades industry; she was also an indication of what was to come. When the women were asked to help America, they pulled the country up by its bootstraps; afterward, they came for what was rightly theirs, what had been unjustly taken away from them centuries before.

Not long after J. Howard Miller created the “We Can Do It” poster, songwriters Redd Evans and John Jacob Loeb composed a song titled “Rosie the Riveter,” and dedicated to all the American women serving the country on the home front during World War II. The popular song is often credited with giving Rosie her name, and being the reason behind an unprecedented number of applications for work at various factories and facilities after 1942.

Rosie the Riveter wasn’t just a face anymore—she was a faithful patriotic woman with a background and a mission. She was working overtime on the riveting machine, and she wasn’t doing it for the money, but to help her boyfriend Charlie, a Nazi-fighting marine. Though tender and frail, Rosie was said to be able to do “more than any male will ever do.” Whether at the assembly line or on the fuselage, she was “making history, working for victory—Rosie the Riveter.”

Rosie as a biblical prophet

Recorded by Kay Kyser and the Four Vagabonds, “Rosie the Riveter” quickly became a national hit. Inspired by its popularity, and only a few months after the release of the song, American illustrator Norman Rockwell drew his version of Rosie for the cover of the May 29, 1943 issue of The Saturday Evening Post.

His drawing—inspired by Michelangelo’s vision of Isaiah on the Sistine Chapel ceiling—depicted her as a young, muscular woman in denim overalls, flexing her bicep with one hand while holding, with the other, a lunch box, her name scribbled on it in white letters. In the background, there’s the American flag, unfurled; in her lap lays a rivet gun; and under her feet—a crushed copy of Adolf Hitler’s Mein Kampf .

Just like the song, Rockwell’s drawing became an instant hit, and Rosie the Riveter consolidated her place in the collective memory of a nation at war, becoming a staple of American popular culture. In the 1990s, this iconic image was repurposed in the 1990s by the US Postal Service, as a stamp with her likeness on it.

Who was the real Rosie?

There is some debate over the identity of Rosie the Riveter, and no definitive answer to the question who she was. Until recently, the most commonly cited possibility was Geraldine Hoff (later Doyle), who worked at a Michigan Navy machine shop during World War II. In 1984, Hoff saw the 1942 Pittsburgh Press photo rumored to be the inspiration for the “We Can Do It” poster, and thought she recognized herself on it. Her claim remained unchallenged for years.

But then, in 2010, Seton Hall University professor James J. Kimble got interested in the matter. After some painstaking research work, he discovered that the photo was actually taken at the Alameda Naval Air Station in California, and that the bandana-clad girl bent over an industrial machine it depicted was none other than Naomi Parker (later Fraley). Parker, who died in 2018 at the age of 96, is nowadays widely considered the strongest candidate (if not the only) for the inspiration behind the “We Can Do It” riveter, the original Rosie.

Unlike Parker, the Rosie from the Redd/Loeb song was an actual Rosie and an actual riveter as well! Her name was Rosalind P. Walter, she lived in Long Island, New York, and worked as a riveter on Corsair fighter planes during World War II. Later she became a well-known philanthropist and humanities advocate. Finally, the model Rockwell used for his 1943 drawing was Mary Doyle Keefe from Vermont, then a 19-year-old telephone operator. She wasn’t really satisfied with the final result. In fact, Rockwell had to phone her later to apologize for depicting her as a much larger woman, “a sort of a giant.”

“Rosie the Riveter” remains, to this day, one of the most successful propaganda campaigns in American history. By the end of World War II—roused by the powerful images, the catchy slogans and the immediate needs of their country—almost 20 million women had taken participation in the war, in one way or another. Most of them filled out the home front industrial labor force; but there were also some in the armed forces, albeit primarily in auxiliary roles due to army rules and legal restrictions.

The home front: the contribution of women workers to the war effort

Unsurprisingly, women made up a significant portion of the industrial labor force during the war years. In January 1942, just after the Pearl Harbor attack, Mary Anderson, director of the Women’s Bureau, reported that there were almost 3 million women “engaged in war work” and that their numbers were “expected to double by the end of the year.” Her expectations proved to be more than realistic—according to the Bureau of the Census, there were 19,304,000 women workers in the United States in 1945, about 30% of the total workforce!

Most of the these women worked in factories and office buildings. They manufactured military equipment, produced ammunition, assembled bombers and trains, and worked all kinds of industrial jobs to provide war supplies to the front lines. They also helped as nurses, secretaries, and in other support roles. Nearly a million “government girls” were recruited for war work. In addition, millions more female volunteers aided the war effort by planting victory gardens, canning produce, selling war bonds, donating blood, salvaging needed commodities, and sending out care packages.

In the military: WACs, WASPs, and WAVES

Working women weren’t making the difference only at home—a significant number joined the military as well. By 1945, it is estimated that some 350,000 American women had heeded to the call to serve their country as part of the Armed Services, working in over 200 different non-combatant jobs.

Most of them were enlisted in the newly-formed Women’s Army Corps (WAC). By 1945, there were more than 100,000 WACs—6,000 of whom were female officers—primarily trained to serve as switchboard operators, mechanics and bakers. Another 100,000 women joined the Navy, as part of the Women Accepted for Volunteer Emergency Service program (WAVES); many of them performed jobs as critical as parachute rigging, cryptography, and even military intelligence.

Last but not least, more than 1,000 women joined the Women’s Airforce Service Pilots (WASPs), thereby becoming the first women to fly American military aircraft. Their main job was to transport cargo from factories to bases, but they also sometimes participated in simulation strafing and target missions. Even though 38 of them lost their lives during World War II, the WASPs service went unrecognized until 2010, when they were awarded the Congressional Gold Medal, one of the highest civilian honors in the United States.

A glimpse of a new reality

The experience of women during World War II was very different from that of their mothers and grandmothers. For the first time, women were working outside the home in large numbers. They were doing jobs that had traditionally been done by men. And they were being paid for their work.

This new reality challenged the traditional ideas about women’s roles in society. The overall share of women in the workforce increased by almost 10% during the war. Women were no longer just wives and mothers. They were also breadwinners and vital members of the workforce.

Customarily restricted to the confines of their homes, married women worked in unprecedented numbers during World War II, becoming a significant part of the workforce for the first time in American history. By the end of the war, nearly one in every four married women was employed.

Moreover, African American women also played a vital role in the war effort, working in a variety of jobs that had previously been closed to them due to the color of their skin. Known as “Black Rosies,” they worked tirelessly and in large numbers, simultaneously fighting authoritarianism abroad and racism at home. Quite inadvertently, World War II brought about a greater degree of equality for women of all kinds and races, giving a glimpse of a new, more beautiful reality.

Rosie the Riveter and female empowerment

The changes that women experienced during World War II would lay the groundwork for the feminist movement of the 1960s and 1970s. Women would continue to fight for equality in the workplace and in society as a whole. And they would never go back to being just homemakers, wives and mothers.

Nobody could expect such a shift in 1942, when J. Howard Miller and Norman Rockwell invented Rosie the Riveter. Essentially, she was supposed to be just a temporary vision with a temporary mission—to encourage women to war jobs so that the men could triumph over Nazism.

But Rosie the Riveter became so much more—an emblem of female empowerment. More than any other fictional creation, she changed the course of American history, and the mindset of an entire country—for the better!