Written By Christine Bradley
in Science 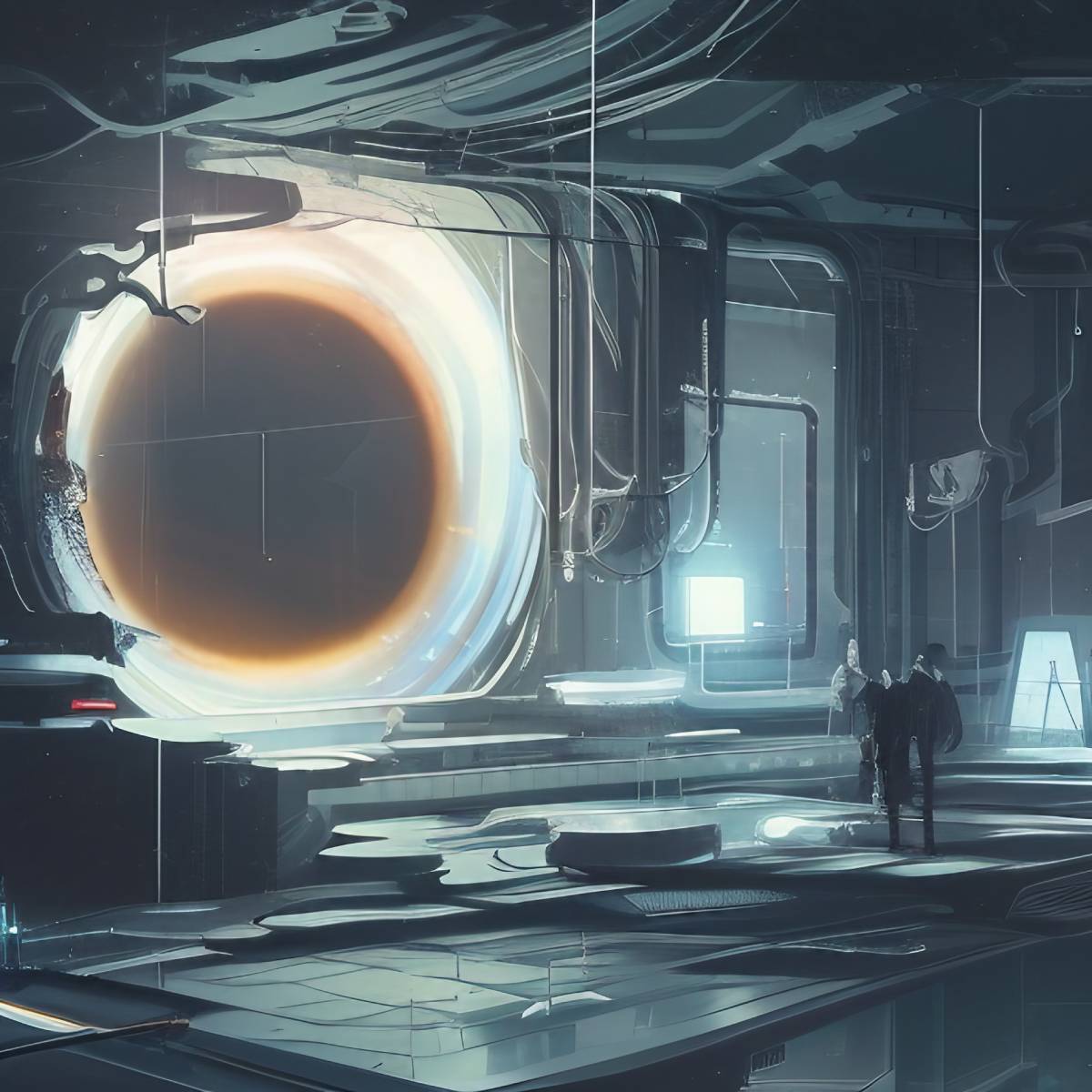 A futuristic science lab .In 1974, British theoretical physicist Stephen Hawking predicted that, owing to quantum effects, black holes must constantly emit a small amount of radiation, which should eventually cause them to evaporate—entirely! It turns out he was right. (© Odd Feed)

As any children’s book on space or Astronomy 101 course will probably tell you, a black hole is an astronomical entity with a gravitational pull so strong that nothing can escape from it, not even light itself.

But that’s how we see things, isn’t it? Wouldn’t this mean that it’s impossible to see a black hole, pretty much by definition? Then, how do we know anything about its nature and properties? How can we be sure that they even exist?

Well, that’s where lab-grown black holes have recently come in handy. And unlike Dyson spheres or O’Neill cylinders, they may not be just hypothetical. But we’ve got some ground to cover before we eventually get to them. So, let’s dive in.

Describing an actual black hole is quite tricky, partly because we can’t observe them directly. As well as tending to be very, very far away from our planet, the total absence of light in their vicinity makes them hard to detect. So, the only way that we can understand a black hole at all is via its impact on the space that surrounds it, as observed through powerful telescopes such as Hubble.

For example, when a star gets too close to a black hole, its matter gets caught in the intense gravity, and it starts emitting characteristic X-rays. By detecting these rays, scientists can theorize the existence and location of a black hole. An even better clue may be a star speedily orbiting an area of apparently empty space. As a matter of fact, this was how researchers came to identify Cygnus X-1, the first astronomical object—or better yet, galactic X-ray source—to be widely accepted as a black hole back in the 1970s.

Possibly the most common way to study the behavior of a black hole is by paying close attention to the so-called event horizons. Simply defined, an event horizon is a boundary in spacetime beyond which events cannot be observed. The term is often used to describe the boundary of a black hole: beyond it, nothing can escape the black hole’s gravitational pull.

Hawking radiation, or why black holes are neither black nor holes

By now, it should be clear that a black hole is actually neither a hole nor any kind of empty space. In fact, it’s pretty much the opposite—a huge amount of matter packed into a tiny area of spacetime. Think of a giant star compressed to the size of a single keyboard button. The resulting density is such that it creates an immensely powerful gravitational field, from which nothing can escape, not even electromagnetic radiation such as light.

Hence, black holes are black… or at least we thought they were until a few decades ago. And then, in 1974, British theoretical physicist Stephen Hawking theorized that even black holes must emit a small amount of radiation, which is now known as Hawking radiation. This is because of quantum effects causing virtual particles to pop into existence near the event horizon.

These virtual particles are usually particle-antiparticle pairs which, under normal conditions, should annihilate each other. However, if one member of the pair falls beyond the black hole’s event horizon, the other—having no partner with which to annihilate—will then be emitted from the black hole as Hawking radiation, causing the black hole to lose mass.

Even though all black holes feed themselves constantly with the cosmic background radiation left from the Big Bang, smaller black holes may not be able to make up for what they lose due to the Hawking radiation. With time—Stephen Hawking suggested—this should theoretically cause the black hole to shrink and ultimately even evaporate.

Ever since it was first hypothesized, the Hawking radiation was seen as an immensely important contribution to the field of quantum gravity. It was the first theory to propose that black holes could leak energy and completely disappear, the latter questioning a basic precept of physics—that information cannot be irretrievably lost. It was also the first theory to suggest that black holes aren’t black at all: even if faintly, they glow in the dark.

Where do black holes come from?

There are four types of naturally occurring black holes, each of which is hypothesized to be formed in a different way. Ever since recently, there’s also another, fifth type: a black hole analog, that is to say, a black hole artificially created by scientists in a lab. But first, let’s take a look at the other four.

First predicted by Albert Einstein in his theory of general relativity, this is believed to be the most common type of black hole. It is created by the death of a large star—ten to 20 times the size of the Sun—after a supernova explosion.

Bigger stars have greater mass and therefore more gravity than regular stars. As a result, their constituent elements are pulled inwardly with more tremendous power, causing the stars to burn faster, with hotter, denser cores.

As a result of the more intense and accelerated reactions, larger stars use up their core fuel more quickly, with nuclear fusion converting lighter elements, such as hydrogen, into heavier ones, such as helium. Over time, a star will fuse increasingly heavier elements, until it eventually fuses iron.

Once a star fuses iron, it can no longer produce energy through fusion, and it collapses in on itself, leading to a spectacular supernova explosion, the energy and light waves of which can be readily detected. The remaining mass and energy of the star condenses into one tiny point, the singularity; what remains is a stellar black hole.

A supermassive black hole is the largest type of black hole, containing a mass of at least a million times that of the Sun. These black holes are thought to be at the center of most, if not all, galaxies.

SMBHs are extremely dense. Scientists believe that they are formed when smaller black holes merge together. The first black hole of this kind to be discovered was M87*, at the center of Messier 87, one of the largest and most massive galaxies in the local universe. Its existence was confirmed as recently as 2019.

Not long after that—more precisely in May 2022—scientists released the first image of Sagittarius A*, the SMBH at the Galactic Center of the Milky Way, our very own galaxy.

It is believed that IMBHs are formed by way of a chain reaction of SBH collisions in compact galaxies. IMBHs may in turn collide with each other to form a bigger object—that is, a SMBH. Even so, the very existence of intermediate black holes challenges current models of black hole growth and evolution, so there’s a lot to explore there.

These black holes are so small that they have a mass comparable to that of an atom. Although very small, they are extremely dense and have a very strong gravitational force. If one were to come in contact with a micro black hole, they would still be pulled in and crushed by the immense pressure.

Proposed by Stephen Hawking in 1971, micro black holes are believed to have come into existence soon after the Big Bang, around 13.7 billion years ago—and then evaporated speedily into thin air. So, scientists are not even sure that they exist. Yet, this hasn’t stopped them from attempting to recreate them. Which brings us to the main topic of this article.

Making your own lab-grown black hole

Some years ago, newspapers were filled with headlines suggesting that the experiments done at the Large Hadron Collider at CERN might produce stable microscopic black holes which could then lead to cataclysmic events, including (but not limited to) the end of the world. As usual, it was all just pure sensationalism.

In reality, the risk of creating a black hole at CERN is still incredibly small. And even if a micro black hole were to be created, it would be incredibly tiny and would quickly evaporate. The CERN collider poses no danger to the public—or the planet—for the simple reason that what happens inside it, happens in nature all the time: high-energy particle collisions, involving pairs of protons.

However, these hypothetical black holes are not the artificial ones which interest us at the moment. The ones that do lead us to physicist Jeff Steinhauer, of the Technion Israel Institute of Technology, who spent seven years of his life developing a way to artificially form microscopic black holes in a laboratory environment. He published his results in 2016. Needless to say, they were mind-blowing.

To create his black holes—yes, that phrase is suddenly both possible and meaningful—Jeff Steinhauer used a process governed by quantum mechanics, first proposed as a theory back in the 1980s, but not attempted in practice until 2009. By Steinhauer, of course. This is how the process went.

Rubidium atoms were first supercooled to a temperature of almost absolute zero. At this temperature, the particles entered a state of quantum entanglement, practically becoming clones of each other, and clumping together to form a “super particle” known as Bose-Einstein condensate (BEC). A laser beam was then used to force the atoms to move at supersonic speeds, resulting in the entrapment of sound waves inside the quantum fluids.

In line with Stephen Hawking’s 1974 theory, pairs of phonons—that is, pairs of sound energy packets—appeared spontaneously at the event horizon, with one of the phonons falling back into the hole, and the other one being thrown out of it, in the form of Hawking radiation. This is precisely what Stephen Hawking predicted would happen. His theory was proved, once and for all. Well…

Despite Jeff Steinhauer’s impressive achievement, his sonic black holes didn’t win Stephen Hawking a Nobel Prize. On the contrary, there are still doubts that what Steinhauer generated wasn’t in fact a credible black hole analog, and it’s difficult to cast such doubts away, even by way of thousands of replications.

But it’s highly unlikely this will happen in our lifetimes—if ever. As a result, black holes will probably remain to be what they have been ever since first conjectured: one of the most mysterious and fascinating phenomena of outer space.