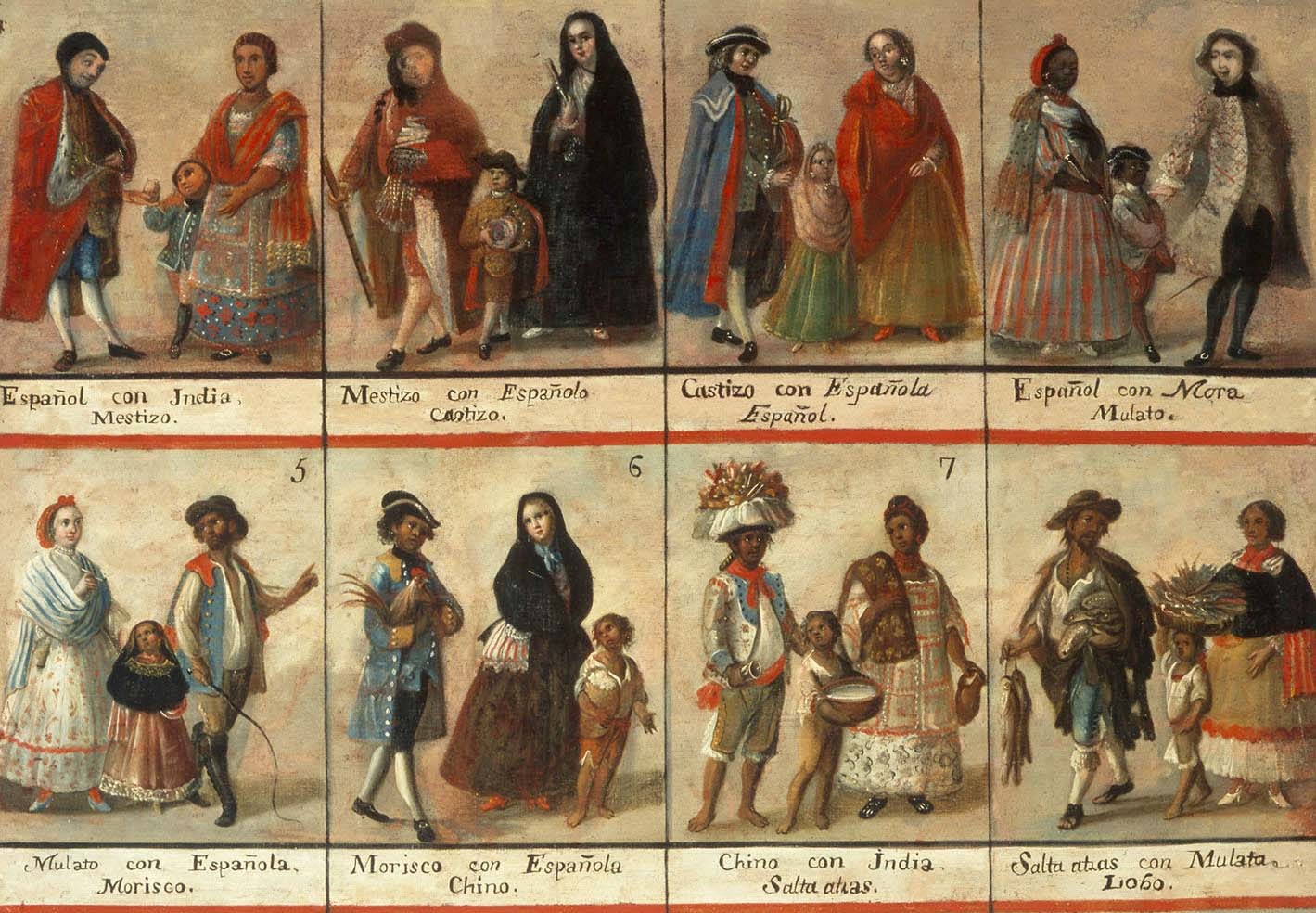 Originating in mid-15th-century Iberian Peninsula, limpieza de sangre—meaning, “purity of blood”—was a complex (Harry Potter-like!) caste system, rooted in the pseudoconviction that it was the duty of post-Reconquista Spaniards and Portuguese to preserve for posterity the existence of an elite Christian social class whose bloodline had never been “contaminated” with the blood of non-Christians (Jews and Muslims).

Even though the biased belief of “pure bloodedness” can be observed amongst many different cultures throughout history—and especially in royal circles (for example, it was one of the fundamental tenets of the Habsburg intermarriage system)—in 16th and 17th-century Spain, it became an obsessive concern and the object of a particularly intense discourse. Blood purity was seen as vital to the success of the Spanish monarchy, and hence it was regarded with great concern by the Spanish crown. In fact, it was one of the main issues behind the outbreak of the War of the Spanish Succession, which was fought to determine who would succeed the last Habsburg king of Spain, Charles II.

But we’re getting ahead of ourselves.

How blood became an issue: a brief prehistory of the limpieza statutes

It all began in 711, when the Moors, under the leadership of Umayyad commander Tariq ibn Ziyad, crossed the Strait of Gibraltar and penetrated Iberia, a land already rich in Visigothic, Christian Roman, and Jewish legacy. Within two decades, the Moors had conquered most of the peninsula, except for a small area in the north, the Basque Country. This area continued to be ruled by Christians, who—over the next few centuries—slowly began to reconquer the old lands. However, it was not until 1492 that the Christians finally won back the entire peninsula, thereby completing the so-called Reconquista.

Even before the Reconquista was complete, the Christian rulers of Spain, newly empowered, faced the issue of what they were to do with those they had conquered, most of them primarily of Moorish or Jewish ancestry. Ferrand Martinez, el Archdeacon of Écija, gave them a most horrendous idea. Beginning in 1378—and going against the advice and will of King John I of Castille—he began preaching sermons against the Jews, blaming them for every Christian misfortune in history, from the death of Christ onward. His invectives resulted in the mass murder of hundreds of Jewish people, and the destruction of the Jewish synagogue in Seville, alongside countless other killings in Córdoba, Valencia and Barcelona.

Things only got worse over the following years. Due to constant religious persecution and violent mob pogroms, by the mid-15th century, over half of Spain’s 300,000 Jews had decided to convert to Catholicism. Unfortunately, that wasn’t the end of it—not by a long shot! On October 19, 1469, in the city of Valladolid, King Ferdinand II of Aragon married Queen Isabella I of Castile. The event, famously, marked the de facto unification of Spain; infamously, it also marked the beginning of a new era of interreligious discrimination in Spain—the era of legalized religious violence and enforced racial purity.

The first blood purity statute was enacted, somewhat arbitrarily, two decades before the marriage of Isabella I and Ferdinand II, after a 1449 Christian riot turned violent in Toledo, the capital of what was then the kingdom of Castile. The statute, titled Sentencia Estatuto de Toledo, banned Jewish and Muslim converts to Christianity—known as conversos and Moriscos, respectively—from entry into public office and any official positions in the Castilian government. However, the document seems to have been of local character only, as it was publicly condemned by both the monarchy and the Catholic Church.

Unfortunately, it wasn’t long before the Catholic monarchs of Spain—as Isabella I and Ferdinand II were jointly called—decided that new converts should indeed have less rights than Old Christian settlers. It didn’t help that some of these converts had been discovered practicing Judaism and Islam in secret. So, with papal blessing (and the common goal of securing Spanish and Christian hegemony over the peninsula) the Iberian rulers resolved to make all the New Christians morally inadequate to be part of many civil and ecclesiastical institutions. And thus, los estatutos de limpieza were born.

After 1449, statutes of limpieza began to spread rapidly throughout the Iberian peninsula. In practice, their enactment was ensured—with ruthless efficiency—by one of the most infamous tribunals of modern history: the Spanish Inquisition (which, let’s be honest, nobody expected to appear here). Established in 1478 by the Spanish monarchs, the Inquisition was originally created to maintain Catholic orthodoxy and identify potential heretics. However, it quickly became the infernal apparatus by which the Iberian monarchs, methodically and quickly, “catholicized” the peninsula.

Since Catholicism did not allow for forced baptisms, the Inquisitors had to get a bit creative at the beginning. So, instead of “coercing” the infidels and non-Christians to convert by forcing their heads into holy water, they began “encouraging” them into conversion, by way of such, well, little things as threatening them with death or torture lest they willingly accept Catholicism as their new faith. The process culminated with the royal decrees of 1492 and 1502, which ordered Jews and Muslims to either convert to Catholicism or leave Spain.

Nowhere to go, nowhere to come back to

On March 31, 1492, the Catholic monarchs of Spain issued the Alhambra decree—an ultimatum which gave the remaining Jews in Spain four months to either convert to Christianity or leave the country. As a result, by July 31, thousands of Jews became conversos, and thousands more emigrated to the neighboring Portugal, where King Manuel I allowed them to resettle. At first.

Unfortunately for the Jews, not long after welcoming them to his country, Manuel I decided to marry Infanta Isabella of Aragon, the eldest daughter and heir presumptive of King Ferdinand II. As part of the marriage contract, Manuel I obliged to banish from Portugal any Jew not willing to convert to Christianity—which was just what he eventually did, in 1496. In 1502, a similar ultimatum was delivered to the Moors. Consequently, by the beginning of the 16th century, all of the 8 million or so inhabitants of the Iberian Peninsula were nominally Christian.

Strangely enough, this didn’t mark the end of the reign of terror; in retrospect, la inquisición was simply warming up. With less obvious suspects, it decided to shift its focus to regulating the faith of the newly converted Catholics, los conversos and los moriscos. This resulted not only in a widespread practice of spying on and denouncing one’s neighbors, but also led to thousands of false charges and religious executions.

How was blood purity judged

It wasn’t easy for a person to prove the purity of their blood under the limpieza statutes: the legal proceedings risked them eternal banishment. However, since it was the only way for a person to escape a life of racism and discrimination, many religious converts attempted to prove themselves Old Christians, apparently preferring to be persecuted than live a life in fear. The process went something like this.

A candidate would kneel, with their right hand on a crucifix placed on a Bible, and would then solemnly announce to be of neither Jewish nor Moorish descent before a religious council. Upon being asked, they would provide the names and birthplaces of both their parents and grandparents. Two delegates of the council were then tasked with questioning the candidate’s ancestors and family members to determine if they were telling the truth. The process could take weeks and was susceptible to corruption, from either side.

After collecting all the reports, the researching delegates would read their conclusions before the rest of the council. Then, a simple majority vote would decide whether the candidate was approved. If the candidate was found to be of Jewish or Moorish descent, they would be persecuted.

Due to the stratification the limpieza statutes beget, the Old Christian commoners in Spain could now assert right to honor, even if not having noble ancestors. The Basques were especially privileged. As already mentioned, the Basque Country—which maintains its fierce cultural independence to this day—was never conquered by the Moors. For this reason, it was believed that the Basques were the only ones to have retained the original purity of the first Christian settlers in Iberia. This gave them the birthright to claim hidalguía, a rank of lower nobility, which aided many Basques to positions of power in the Spanish administration.

By the middle of the 16th century, with the Ottoman Empire raiding along the Spanish coast, the attention of the monarchy and the Inquisition turned to the converted Muslims once again. In 1567, King Philip II ordered them to give up their Arabic names, traditions, clothes and even prohibited the public use of their language. In reaction, the Moriscos organized an uprising, their second in a century. After the revolt was violently subjugated by the Crown, on April 9, 1609, King Philip decreed the expulsion of all the Moriscos from Spain. Over the following five years, the vast majority of them were banished from the peninsula, with most of them settling in Maghreb, North Africa.

The death and afterlife of limpieza de sangre

Only by the latter part of the nineteenth century, the notion of blood purity—and the related idea that there exists an evil class of Jews, Los Judíos—began to die down. By mid-19th century, children of Jewish and Moorish descent could already be admitted to college in Spain, and in 1870, a decree was passed outlawing all blood purity statutes that had been in use since that very first edict in Toledo, marking the legal end of centuries-long policies of racial purity and repression.

In reality, however, the consequences of the limpieza de sangre statutes remained relevant for decades after. Just as an example, even in 1926, the Jesuit order refused to admit to their ranks anyone who was not of the “right” race, no matter how devout a Christian they might be. Furthermore, Majorcan conversos were not allowed to say mass in a cathedral all the way until the beginning of the 1960s. Not surprising if one takes into consideration the fact that the Alhambra decree of 1492 was formally and symbolically revoked only as late as December 16, 1968.

And another thing. Some of the conversos who were forced to leave Spain in 1492 took the concept of limpieza de sangre with them all the way to the New World colonies; there, sadly, it took on a different, more racialized meaning. Namely, in Latin America, it became a way to justify the mistreatment of indigenous and African people, who were seen as impure and inferior to European whites. To this day, the legacy of limpieza de sangre continues to impact many Latin American societies.

The Origins, History, and Evolution of the Handfasting Ceremony